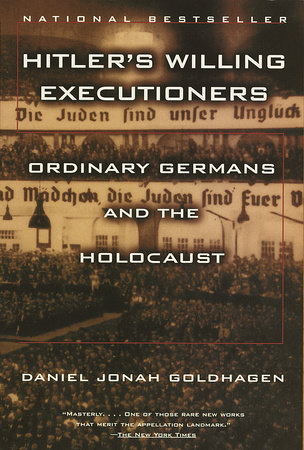 The questions, discussion topics, and reading list that follow are intended to enhance your group’s reading of Daniel Jonah Goldhagen’s Hitler’s Willing Executioners: Ordinary Germans and the Holocaust. We hope they will enrich your understanding of this revolutionary new analysis of the Holocaust, which has riveted thousands of readers and provoked impassioned discussion in both America and Europe.

"Against much of the literature on the Holocaust, my book shifts the focus of the investigation of the Holocaust from where it has been–namely, on abstract structures like the S.S., the Nazi Party, and the terror apparatus–to the human beings who actually perpetrated the crimes. A very large number of ordinary Germans were involved–a minimum figure of 100,000–and until this point, you have probably read close to nothing about the actual people who carried out the killings, manned the camps, and guarded the ghettos. I have shifted the investigation to them, the perpetrators, in an effort to explain their actions, uncover their motivations, and explicate how such a thing could have happened in an otherwise civilized country such as Germany.

I am very pleased that the publication of my book has produced widespread, international discussion and that so many people seem to feel compelled to come to grips with its contents.  Whatever exact conclusions people arrive at after reading my book–and some continuing disagreements are inevitable–that the issues it raises are being discussed so vigorously can be seen as being only a good thing."–Daniel Goldhagen

It is a question that has haunted the world for the last half-century and produced a host of theories: How could the Holocaust happen? In Hitler’s Willing Executioners, the product of years of studying the Holocaust, Daniel Goldhagen gives a radical new answer: Germans degraded, brutalized, and slaughtered Jews not, as has previously been asserted, because Germans were coerced, because of irresistible social or psychological pressure, or because they were slavishly obedient to their führer and merely following orders, but because a virulent form of antisemitism that had been generations in the making permeated German society, leading Germans to believe that the extermination was justified and necessary.

By the time Hitler came to power, Goldhagen attests, hatred of Jews was a fully accepted, even institutionalized element of the culture; hence he found no shortage of willing executioners among ordinary Germans with whom to implement his terrible "final solution." Chillingly, Goldhagen uses the killers’ own words to describe their actions and the mental world that made such actions possible.

Hitler’s Willing Executioners is a devastating portrait of a deluded society as well as a provocative work of scholarship that challenges fifty years of conventional wisdom.

1. What differences, if any, does Daniel Goldhagen establish between "Germans" and "Nazis"? How does his handling of the two terms depart from traditional use?

2. Goldhagen sets out to refute the "Jews as scapegoats" theory with which many social scientists have explained antisemitism in the Weimar Republic. Can you explain this theory? Does it make sense to you? Does Goldhagen succeed in fully discrediting this theory?

3. How, according to Goldhagen, did the very nature of German antisemitism change during the course of the nineteenth century? What new elements entered into this prejudice?

4. For half a century people have wondered how the Holocaust could have taken place in a "civilized" country. The critic Ludwig Lewisohn has called the Nazi movement a "Revolt Against Civilization"; Clive James, writing about Goldhagen’s book in The New Yorker, stated his belief that "Germany ceased to be civilized from the moment Hitler came to power." Just how civilized, or uncivilized, was prewar and wartime Germany?

5. In her memoir, which is quoted by Goldhagen, Melita Maschmann recalls that during the 1930s "one could have anti-semitic opinions without this interfering in one’s personal relations with individual Jews" [p. 89]. Though this fact might seem to indicate a vestige of tolerance, Maschmann denies that that was so. Can you explain this denial? Do you agree with her position?

6. What do the words "pacification" and "resettlement" really mean, according to the Nazi lexicon? What other euphemisms can you find in this account? Why, if eliminationist antisemitism was universal, do you think that such euphemisms were necessary?

7. On page 169, Goldhagen compares the condition of Jews in the Third Reich with that of American slaves. Do you agree with his conclusions?

8. The Germans, in Goldhagen’s view, were not amoral but acted in accordance with a specific system of morality peculiar to their culture. For example, he writes, ""all policies of putting Jews to work were imbued with a symbolic and moral dimension" [p. 285]. How would you define and explain this "moral" system?

9. Pastor Walter Höchstädter compared the Holocaust with medieval witch-hunts. How do the two phenomena compare? What is "magical thinking," and how did the Germans manifest it?

10. "Prejudice is a manifestation of people’s (individual and collective) search for meaning" [p. 39], writes Goldhagen. Can you explain this statement? How does it apply to the German prejudice against the Jews? How might it apply to other varieties of prejudice, either racial or religious?

11. As qualified by Goldhagen, how did the Germans’ image of Jews differ from that of "subhuman" races like Slavs? Can you describe the Nazis’ system of racial hierarchy? How did the Jews fit into this hierarchy, and what made their position different from that of any other race?

12. In what substantive ways did the Holocaust differ from other twentieth-century incidences of genocide, such as the Cambodian killings under Pol Pot, the Turkish massacres of Armenians, the mutual atrocities between Hutus and Tutsis in Rwanda, or the mass killings in Bosnia? Were the differences a matter of ideology, of history, or of something else?

13. The twentieth-century Holocaust was not the first instance of widespread persecution and execution of the Jews; such practices were prominent features of the Crusades and the Inquisition, for example. In what ways did the actions and prejudices of the twentieth-century perpetrators differ from those of their medieval predecessors?

14. Why do you think that other European nations, such as Denmark, Italy, Russia or France, failed to
develop a deeply antisemitic philosophy to the same extent that Germany did? Why did these other countries show little inclination to join Germany in the genocide? What, historically, might have contributed to making these countries different?

15. Goldhagen has called Germany "the great success of the postwar era," not so much because of its economic miracle but because of "the remaking of German culture…they have reeducated themselves, in part by drawing appropriate conclusions from their country’s Nazi past." Assuming that Goldhagen’s theory about the deep cultural roots of German antisemitism is correct, do you believe that it is possible for the country to remake itself so speedily? Might latent antisemitism not resurface in propitious circumstances, as it did under Hitler?

16. After reading Hitler’s Willing Executioners, do you feel that the Holocaust was a uniquely German phenomenon, or do you believe that it could happen anywhere, given the appropriate circumstances?

17. What thesis did Goldhagen set out to prove with this book? Did he succeed in proving it? By the end of the book, has he persuaded you that earlier theories, like Stanley Milgram’s "obedience experiment" or Hannah Arendt’s idea of "the banality of evil," are insufficient for explaining the Holocaust?

Daniel Jonah Goldhagen is Associate Professor of Government and Social Studies at Harvard University and an Associate of Harvard’s Minda de Gunzburg Center for European Studies.  Hitler’s Willing Executioners is based upon his doctoral dissertation, which was awarded the American Political Science Association’s 1994 Gabriel A. Almond Award for the best dissertation in the field of comparative politics.
Learn More About Hitler’s Willing Executioners
print

All Quiet on the Western Front
Erich Maria Remarque

Into That Darkness
Gitta Sereny

The Coming of the Third Reich
Richard J. Evans

A Castle in Wartime
Catherine Bailey

The Order of the Day
Éric Vuillard

Death in the City of Light
David King

Into the Lion’s Mouth
Larry Loftis

Good-Bye to All That
Robert Graves

Greenlights
Matthew McConaughey
Back to Top