Confederates in the Attic Reader’s Guide 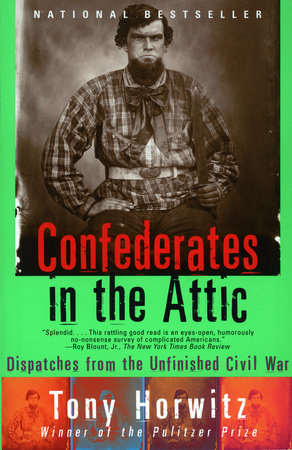 Confederates in the Attic Reader’s Guide

The questions, discussion topics, and suggested reading list that follow are intended to enhance your group’s reading of Tony Horwitz’s Confederates in the Attic: Dispatches from the Unfinished Civil War. Mingling history, memoir and travelogue, this fresh, provocative, fast-paced adventure will leave many readers itching to travel in Horwitz’s tracks.

Tony Horwitz returns home from reporting on foreign war zones to discover a different conflict raging on his own doorstep. Though the Civil War ended in 1865, it remains very much aflame in the hearts and minds of Americans, Southerners in particular. Propelled by his own lifelong passion for the South and the Civil War, Horwitz embarks on a ten-state journey of discovery—personal, historical, and sociological—to understand why he and millions of other Americans obsess on the 1860s.

During his trip, Horwitz joins "hardcore" Civil War reenactors who replicate every detail of a rebel soldier’s life, right down to the hardtack and the lice. The women are equally obsessed, including a real-life Scarlett O’Hara and the 90-year-old widow of a Confederate soldier. Horwitz finds that the symbols of the Old South remain raw and racially divisive, in one case leading to murder. From Charleston to Richmond, from Andersonville to Shiloh, Horwitz explores the War’s historic and modern terrain, as well as interviewing Shelby Foote and other scholars to peel away the myths and misconceptions that cloud our understanding of history.

1. Horwitz begins the book by wondering why his immigrant great-grandfather became obsessed by the Civil War. Does he ever answer this question? Why are so many Americans with no blood tie to the War nonetheless fascinated by it?

2. While Americans cling to the Civil War, they’ve forgotten most of the rest of their history. There is no comparable obsession with the Mexican War, the War of 1812, or even the American Revolution. What are some of the reasons for this?

3. Horwitz, though not a native Southerner, seems to enjoy the region and its people. What are some of the traits of the South he finds appealing in Charleston and elsewhere?

4. Horwitz meets many women who are as devoted as men to memory of the War: Sue Curtis, June Wells, Melly Meadows, Mauriel Joslyn. How does their approach to the War differ from that of men?

5. Horwitz devotes more space to Robert Lee Hodge than to any other character. Why? What drives Rob? Do you find him heroic, appealing, repellent, or just plain nuts?

6. Horwitz suggests that reenactors are motivated by an urge to escape their own time zone and experience the "period rush" of entering another era. What is it about the 1860s that seems more appealing than our own time period? Does Horwitz ever experience a period rush?

7. At one point, Horwitz, clad as a Confederate reenactor, walks into a shop full of black shoppers and feels ashamed. Is it possible to play-act the Civil War as spectacle, or does reenacting the War inevitably raise troubling questions? Horwitz often asks himself a difficult question: what is the appropriate way to remember the Confederacy and those who fought for it? Can you honor your Confederate ancestors without insulting others? What do you think?

8. Horwitz visits most of the War’s major battlefields, including Gettysburg, Shiloh, Vicksburg and Manassas. What draws him, and other people, to these parks? In what ways are they a sanctuary from modern society?

9. Many Southern whites revere the rebel battle flag as a symbol of the valor and sacrifice of their ancestors. To many African-Americans, the same flag is a hated symbol of segregation and white supremacy. Is there any middle ground? Which of the states in the South have navigated this minefield most successfully?

10. As he tours the Civil War landscape, Horwitz often finds battlefields and other sites threatened by strip malls and tract housing. What value is there in saving these sites, which are often just empty fields?

11. Throughout his journey, Horwitz encounters a profound sense of Southern grievance, a feeling that the region is still looked down on. Is this Southern paranoia or a justifiable response to the way the region is regarded by the North and by Hollywood?

12. Horwitz writes about the killing of Michael Westerman while flying a Confederate flag from his truck, in Todd County, Kentucky. What are the social and emotional reasons why Westerman’s killing becomes such a flashpoint for Southern anger, both black and white?

13. In Richmond, Horwitz listens to a debate over whether a statue of Arthur Ashe belongs on Monument Avenue. He finds his own views shifting. Do you think the statue should have been put there?

14. In Alabama, Horwitz visits classrooms to see how the Civil War is being taught today. How are black and white students approaching the War differently? Is there any sense of a common American history?

15. Across the South, Horwitz implies that the dream of the Civil Rights era is embattled. In what ways does he show progress in race relations, and in what ways retreat?

16. At Andersonville Prison, Horwitz finds that there are two irreconcilable views of who was responsible for the tragedy there. Who wrote these histories and why? Which view do you think is more accurate?

17. The South’s population is changing dramatically as the region fills with Northerners, Latin Americans, Asians and others. If this trend continues, can Confederate remembrance endure in the 21st century?

18. Since the book’s publication, Horwitz has been attacked by both right-wing and left-wing Southerners who think he is either an apologist for Confederate heritage or a sworn enemy of it. Overall, do you think he is fair? Too fair?

19. Every year, it seems, there is a new book or movie, such as Cold Mountain or Gettysburg, that reignites passion for the Civil War. What literature, film or television series has brought the War alive for you?

Tony Horwitz, a Pulitzer Prize-winning writer, has given us the Civil War in ways we’ve never seen it before, and a fascinating, engaging adventure through the contemporary and historical South.
Learn More About Confederates in the Attic
print

In the Waves
Rachel Lance

Our Man in Charleston
Christopher Dickey

The Man Who Saved the Union
H. W. Brands

All for the Union
Elisha Hunt Rhodes

Beyond the Hundredth Meridian
Wallace Stegner