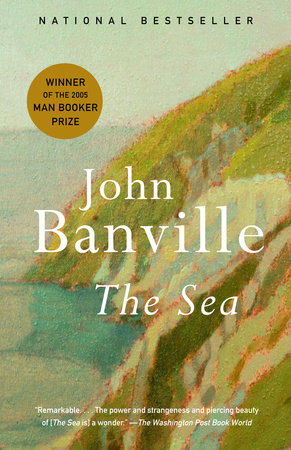 “A piece of violent poetry—an autumnal, elegiac novel whose desolate story is carried along by the sweet and stormy tides of its . . . magnificent prose. . . . Treacherously smart and haunting.” —The Boston Globe

The introduction, discussion questions, suggestions for further reading, and author biography that follow are designed to enhance your group’s discussion of John Banville’s The Sea, winner of the 2005 Man Booker Prize.

In this hypnotic tour de force of mood, language, and psychological revelation, the Irish novelist tells the story of a bereaved man desperately sorting through the strands of his memory—the memories of his recent loss and those of the losses that came before it. Those various strands are by now so intertwined and tightly knotted that Max Morden doesn’t know which of them causes him the greatest pain. But as Banville’s sinuous narrative plays out, it becomes apparent that Morden is in danger of being strangled by his memories, especially by the ones he has invented. If one theme is most prominent in The Sea, it’s the treachery of memory and the fluidity of the boundary that separates recollection from fabrication.

In his late middle age, Morden is a sometime art historian desultorily at work on a book on the French painter Bonnard. His wife, Anna, has recently died of cancer, and although their marriage was based on an unspoken contract of mutual ignorance (“The truth is, we did not wish to know each other. More, what we wished was exactly that, not to know each other,” p. 159), he is now half-deranged by grief. His grief has brought him back to the seaside village of Ballyless, where he used to spend summers as a child and where, some fifty years before, he became involved with a family named the Graces. Max’s parents were poor, but the Graces were wealthy. They rented an entire house, had their own motor car—with a touring map of France negligently displayed on the shelf under the rear window—and treated each other with faintly sardonic indulgence. Max fell in love with them.

Or, rather, he fell in love with two of them. The first object of his desire was Connie Grace, a lush, overpoweringly sensual woman who greeted her children’s new friend by offering him an apple. Max’s contact with her was limited to heartbroken yearning and guilty spying. Fulfillment came from her daughter Chloe. She was his own age, and she was blonde, imperious, and more than a little cruel. She came with her own attendant spirit, her mute twin Myles. Chloe gave Max his first kiss. She introduced him to the rapturous humiliation of the lover whose love is never fully returned. And finally, she brought him his first experience of death, an experience so catastrophic that everything he feels now may only be an echo of it.

The layers of Max’s past do not rest neatly on top of each other like geological strata but rather shift and overlap like ocean currents. They coexist with the ebb and flux of a present in which he drinks too much, fends off his daughter’s attempts at caring for him, and observes the other occupants of his rooming house, the same house where the Graces once stayed. Banville’s accomplishment is to orchestrate these currents of memory and perception as deftly as more conventional novelists arrange plot twists, using them to reveal his narrator and lay bare the deceptions that lie at the heart of his consciousness, and perhaps of all consciousness. The result is a work of symphonic power whose structural inventiveness coexists with an oceanic depth of feeling, and whose prose demands to be read out loud.

1. The Sea is made up of three temporal layers: the distant past of Max’s childhood, the recent past of his wife’s illness and death, and the present of his return to Ballyless. Instead of keeping these layers distinctly separated, Banville segues among them or splices them together, sometimes within a single sentence. Why might he have chosen to do this, and what methods does he use to keep the reader oriented in his novel’s time scheme?

2. Morden frequently refers to the Graces as gods, and of course the original Graces were figures in classical mythology. What about these people makes them godlike? Does each of them possess some attribute that corresponds, for instance, to Zeus’s thunderbolt or Athena’s wisdom? What distinguishes the Graces from Max’s own unhappily human family? Are they still godlike at the novel’s end?

3. When Max first encounters the Graces, he hears from the upstairs of their house the sound of a girl laughing while being chased. What other scenes in the book feature chases, some playful, some not? Is Morden being chased? Or is he a pursuer? If so, who or what might he be pursuing?

4. Morden is disappointed, even “appalled” [p. 4], to find the Cedars physically unchanged from what it was when the Graces stayed there. Yet he is also disappointed that it contains no trace of its former occupants [p. 29]. What might explain his ambivalence? Has he come to Ballyless to relive his past or to be free of it? Given the shame and sadness that suffuses so much of his memory, how is one to interpret his sense of the past as a retreat [pp. 44–45]?

5. “How is it,” Max wonders, “that in childhood everything new that caught my interest had an aura of the uncanny, since according to all the authorities the uncanny is not some new thing but a thing known returning in a different form, a revenant?” [p. 8]. What might account for this sense of déjà vu? What episodes in this novel seem to echo earlier ones, and are there moments when the past seems to echo the future, as if time were running backward? In this light, consider Max’s realization that his childhood visions of the future had “an oddly antique cast” [p. 70], as if “what I foresaw as the future was in fact . . . a picture of what could only be an imagined past” [p. 71].

6. How does Banville depict the other characters in this novel? To what extent are they, as Max suggests, partial constructs, as Connie Grace was “at once a wraith of my imagination and a woman of unavoidable flesh and blood” [p. 65]? Does Max’s voice, wry, self-reflexive, and resplendently vivid, give these characters an independent life or partially obscure them? Are there moments when they seem to peek out from beneath its blanket and show themselves to the reader?

7. Throughout the novel Max suffers from an overpowering, all-pervasive sense of guilt. Is this guilt justified? What are his crimes, or using another moral language, his sins? Has he managed to atone for any of his failures or redeem any of his spoiled relationships by the novel’s end? Is such redemption possible in this novel’s view of human nature?

8. On learning that she is fatally ill, both Max and Anna are overcome by something he recognizes as embarrassment, an embarrassment that extends even to the inanimate objects in their home. Why should death be embarrassing? Compare the grown Max’s shame about death to his childhood feelings about sex, both his sexual fantasies about Connie Grace and their subsequent fulfillment with her daughter.

9. Significantly, Max’s fantasies about Mrs. Grace reach a crescendo during an act of voyeurism. What role does watching play in Max’s sense of others? Has observing people been his substitute for engaging with them? How does he feel about other people watching him? And what are we to make of the fact that Max is constantly watching himself—sometimes watching himself watching others, in an infinite regress of surveillance and alienation?

10. Max is a poor boy drawn to a succession of wealthy women, culminating in his very wealthy wife. Was his attraction to them really a screen for social climbing? In loving Connie and Chloe and Anna, was he betraying his origins? Are there moments in this novel when those origins reassert themselves?

11. Why might Max have chosen the painter Bonnard as the subject for a book? What episodes from the painter’s life parallel his own or illuminate it metaphorically? Note the way the description of the Graces’ picnic recalls Manet’s Dejeuner sur l’Herbe. What other scenes in the novel allude to works of art or literature, and what is the effect?

12. The Sea has a triple climax that features two deaths and very nearly a third. In what ways are these deaths linked, and to what extent is Max responsible for them? Do you interpret his drunken night walk on the beach as an attempt at suicide? How does your perception of Max change in light of Miss Vavasour’s climactic revelation about the events that precipitated Chloe’s drowning?

13. Just as the critical trauma of Max’s life grew out of a misapprehension, so the entire novel is shrouded in a haze of unreliable narrative. Max’s memories are at once fanatically detailed and riddled with lapses. He freely admits that the people in his past are half real and half made up. “From earliest days I wanted to be someone else,” he tells us [p. 160], and a chance remark of his mother’s suggests that even his name may be false [p. 156]. Can we accept any part of his account as true? Are there moments in this novel in which reality asserts itself absolutely? What effect do these ambiguities have on your experience of The Sea?

John Banville was born in Wexford, Ireland, in 1945. Between 1988 and 1999, he was the literary editor of The Irish Times*. The author of twelve previous novels and one collection of short stories, he has been the recipient of the James Tait Black Memorial Prize, the Guardian Fiction Prize, and a Lannan Literary Award for Fiction. The Sea won the 2005 Man Booker Prize.

The Liar’s Dictionary
Eley Williams
Back to Top