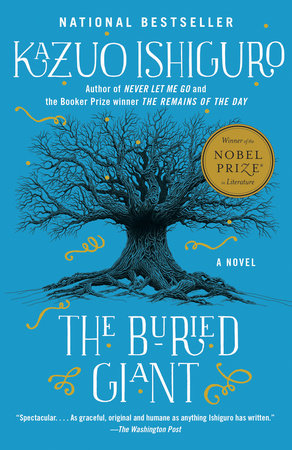 The questions, discussion topics, and reading list that follow are intended to enhance your reading group’s discussion of The Buried Giant, the remarkable new novel from internationally acclaimed novelist Kazuo Ishiguro.

From one of the most preeminent writers of our times comes The Buried Giant, an extraordinary new novel that poses powerful questions about love, loss, and mortality. The novel centers around an elderly couple, Beatrice and Axl, who set out on an epic journey through war-torn lands in hopes of finding their son. As they contend with the physical hardships of their journey, they also encounter danger from a variety of mystical elements: ogres, demons, and an ever-present fog that makes memory elusive. With the help of a brash yet determined knight and a mysterious young boy, they travel across lands familiar and strange, ever closer to learning their son’s fate. What they end up discovering along the way, though, leads them in surprising directions that will forever alter the fabric of their relationship—as well as the history of their embattled homeland.

At once both brutal and affecting, Ishiguro’s novel is a fresh take on the hero’s journey. With unforgettable characters and a pace that rivets, The Buried Giant is sure to resonate as a classic for years to come.

1. Discuss the idea of the hero’s quest as perpetuated in pop culture. How does Ishiguro’s story conform to the standards of this literary trope? How does it defy it?

2. The mist that permeates Axl and Beatrice’s world creates societies wherein historical and personal memory is limited. Discuss the significance of the mist throughout the novel. How does it invite fear? When is it comforting? What allegories can you draw from it?

3. In Chapter Two, Axl and Beatrice have an uncomfortable encounter with a boatman and an old woman. Discuss the significance of this interaction. How did you interpret the woman’s odd—and brutal—behavior? How does this meeting with the boatman echo throughout the novel?

4. When Beatrice and Axl visit the Saxon village, Ivor apologizes for the fact that his community set on them like “crazed wolves” (59). At what other points in the novel is human behavior described as animalistic?

5. How does Edwin’s memory of his mother change throughout the novel? Discuss the incident in which he is stuck in the barn in Chapter Four. How does his mother’s voice act as a protective force? How much of his recollection of his mother do you think is accurate, and how much is fabricated?

6. Discuss the themes of trust and deception throughout The Buried Giant. How does the mist cause distrust between people? At what points do we see doubt creep into Axl and Beatrice’s relationship? Their relationships with other characters?

7. Discuss Edwin’s relationship with Wistan. Why do you think Wistan took Edwin under his wing?

8. Several characters are described as “warriors” in The Buried Giant. What values or traits are intrinsic to this label? How does honor factor into a warrior’s conduct?

9. In Chapter Seven, Gawain leads Beatrice, Axl, and Edwin through an underground tunnel from the monastery that they had believed to be a place of refuge. Why do you think each character see different things—bats, dead infants—during their trek? Do you think the brutality described in this scene is imagined?

10. On page 86, Edwin is described as a “mule.” Discuss the significance of this characterization, and how it echoes throughout the novel.

11. In Chapter Eleven, Beatrice and Axl have a horrifying experience while trying to ford a river. Discuss this scene, and the grotesque descriptions within it. What is the significance of Axl’s interaction with the woman on the boat? Why do you think Beatrice’s memory is so greatly affected during this scene? What does this part of their journey reveal about their relationship?

12. Part III of the novel opens with Gawain’s First Reverie. Describe the contents of this section. Why do you think Ishiguro chose to write this section in such an intimate perspective?

13. Discuss the duel between Wistan and Gawain in Chapter Fifteen. Do you believe they respect each other, despite their opposing loyalties? How did you interpret Wistan’s emotional state after slaying both Gawain and Querig?

14. Axl and Beatrice’s relationship is marked by tenderness and mutual affection throughout the novel. Were you surprised, then, by the revelation of Beatrice’s unfaithfulness? How did you interpret their final interactions in the last chapter of the novel?

15. Why do you think Ishiguro chose to have the final chapter of the book come from the perspective of the boatman?

Kazuo Ishiguro’s seven previous novels have won him wide renown and numerous honors. His work has been translated into more than forty languages. Both The Remains of Day and Never Let Me Go have more than 1,000,000 copies in print across all platforms, and both were adapted into highly acclaimed films.
Learn More About The Buried Giant
print

Half of a Yellow Sun
Chimamanda Ngozi Adichie
Back to Top