The Thing Around Your Neck Reader’s Guide 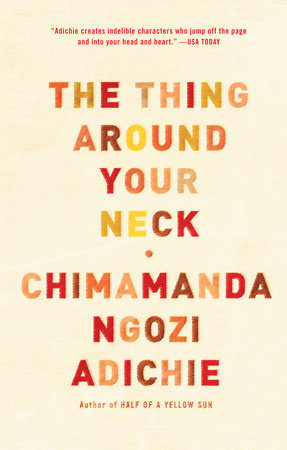 The Thing Around Your Neck Reader’s Guide

print
The Thing Around Your Neck Reader’s Guide

“Affecting. . . . The Africa in Adichie’s collection isn’t the Africa that Americans are familiar with from TV news or newspaper headlines. Her stories are not about civil war or government corruption or deadly illnesses. She is interested in how clashes between tradition and modernity, familial expectations and imported dreams affect relationships between husbands and wives, parents and children.” – The New York Times

The questions, discussion topics, and reading list that follow are intended to enhance your reading group’s discussion of The Thing Around Your Neck, the richly evocative collection of stories by Chimamanda Ngozi Adichie.

Chimamanda Ngozi Adichie burst onto the literary scene with her remarkable debut novel, Purple Hibiscus, which critics hailed as “one of the best novels to come out of Africa in years” (The Baltimore Sun), with “prose as lush as the Nigerian landscape that it powerfully evokes” (The Boston Globe); The Washington Post called her “the twenty-first-century daughter of Chinua Achebe.” Her award-winning Half of a Yellow Sun became an instant classic upon its publication three years later, once again putting her tremendous gifts—graceful storytelling, knowing compassion, and fierce insight into her characters’ hearts—on display. Now, in her most intimate and seamlessly crafted work to date, Adichie turns her penetrating eye on not only Nigeria but America, in twelve dazzling stories that explore the ties that bind men and women, parents and children, Africa and the United States.

In “A Private Experience,” a medical student hides from a violent riot with a poor Muslim woman whose dignity and faith force her to confront the realities and fears she’s been pushing away. In “Tomorrow is Too Far,” a woman unlocks the devastating secret that surrounds her brother’s death. The young mother at the center of “Imitation” finds her comfortable life in Philadelphia threatened when she learns that her husband has moved his mistress into their Lagos home. And the title story depicts the choking loneliness of a Nigerian girl who moves to an America that turns out to be nothing like the country she expected; though falling in love brings her desires nearly within reach, a death in her homeland forces her to reexamine them.

Searing and profound, suffused with beauty, sorrow, and longing, these stories map, with Adichie’s signature emotional wisdom, the collision of two cultures and the deeply human struggle to reconcile them. The Thing Around Your Neck is a resounding confirmation of the prodigious literary powers of one of our most essential writers.

1. Cell One:
• “Boys who had grown up watching Sesame Street, reading Enid Blyton, eating cornflakes for breakfast, attending the university staff primary school. . . . were now cutting through the mosquito netting of their neighbors’ windows, sliding out glass louvers, and climbing in to steal TVs and VCRs” (p. 5). Why is this happening?
• Nnamabia’s early transgressions are forgiven without punishment. Are his parents responsible in some way for his eventual criminal activity? Is he truly innocent, as his mother insists?
• How does the old man change Nnamabia? Why does he affect him this way?
• Why did Adichie choose this story to lead the collection?

2. Imitation:
• What is the metaphor of the masks? And the significance of an original versus a copy?
• On page 26, Adichie writes about America’s “abundance of unreasonable hope.” What does this mean, in this story and in the collection as a whole?
• Why is it expected that men will be unfaithful, but women will not? What prompts Nkem to finally speak up?

3. A Private Experience:
• What kinds of assumptions does Chika make about the Muslim woman?
• Chika “wonders what purpose this lie serves, this need to draw on a fictional past similar to the woman’s” (p. 50). Why do you think she tells this lie?
• What does the title mean?
• Why does Chika ask to keep the scarf?

4. Ghosts:
• How much do you know about the Nigerian Civil War, the war James and Ikenna are discussing? How much does the reader need to know?
• “Ikenna, I have come to realize, is a man who carries with him the weight of what could have been” (p. 66). What prompts James’s realization? What weight does James carry?
• What is the significance of Ebere’s visits?

5. On Monday of Last Week:
• What is Adichie trying to say about American parenting?
• How does what happened on Monday change Kamara’s attitude? Why does Tracy have this effect on her?

6. Jumping Monkey Hill:
• How does Edward’s image of Africa differ from Ujunwa’s reality? What does this story tell us about white people’s attitudes towards Africans?
• On page 103, Ujunwa says she is not writing about her father “because she had never believed in fiction as therapy. The Tanzanian told her that all fiction was therapy, some sort of therapy, no matter what anybody said.” Discuss the nature of fiction, especially in terms of the story Ujunwa ultimately writes.
• How does Edward’s suggestion to Ujunwa, “I’d rather like you to lie down for me” (p. 106), affect Ujunwa? How does it inform her response to his critique of her story?

7. The Thing Around Your Neck:
• Tonally, this story is quite different from the others. Discuss the differences. Why is it the title story for the collection?
• When “your” uncle says that “America was give-and-take” (p. 116), what did you think he meant?
• What is “the thing around your neck”? What finally loosens it?
• Do you think “you” will return to him?

8. The American Embassy:
• “It was not courage, it was simply an exaggerated selfishness” (p. 136). Is the woman’s assessment of journalists accurate? Or is she merely thinking of her husband?
• Why doesn’t she tell the interviewer about Ugonna’s death?

9. The Shivering:
• What role does religion play in this story? What about faith?
• How does Chinedu’s homosexuality affect the story? Compare the American and Nigerian attitudes towards homosexuality.

10. The Arrangers of Marriage:
• On page 172, Ofodile tells Chinaza, “If you want to get anywhere [in America] you have to be as mainstream as possible.” Do you agree with him? Ultimately, does Chinaza?
• Do you think Chinaza will do as Nia suggested, and leave her husband once she gets her papers? Why?

11. Tomorrow Is Too Far:
• In this story, as in several others, a brother receives preferential treatment over his sister. How do Nigerians’ attitude towards women differ from Americans?
• What drives the main character to cause Nonso’s death? Is it murder? Why doesn’t Dozie stop her, or tell on her?
• Discuss the last paragraph of the story. Why do things turn out the way they do?

12. The Headstrong Historian:
• Why do you think Adichie chose to end the collection with historical fiction? How does it affect your understanding of some of the other stories’ characters’ motivations?
• Nwamgba believes firmly in things like destiny. Which of Adichie’s contemporary characters share that belief?
• How does Nwamgba’s plan for her son to learn English backfire? How does it pay off?
• Why does Grace change her name? What destiny is she fulfilling?

13. General Questions:
• Do Adichie’s stories have morals? How do they build upon each other? What is the moral of the collection as a whole?
• Many of the stories involve the influence of the West, particularly America, on Nigerian life. What point is Adichie trying to make? Which characters are happier, those who live in the U.S., or in Nigeria?
• How do differences in class, education, religion, and ethnicity come into play, both in America and in Nigeria?
• Discuss the importance of food in these stories. What does it signify?

Chimamanda Ngozi Adichie grew up in Nigeria. Her work has been translated into thirty languages and has appeared in various publications, including The O. Henry Prize Stories, 2003; The New Yorker; Granta; the Financial Times; and Zoetrope. Her most recent novel, Half of a Yellow Sun, won the Orange Broadband Prize and was a finalist for the National Book Critics Circle Award; it was a New York Times Notable Book and a People and Black Issues Book Review Best Book of the Year. Her first novel, Purple Hibiscus, won the Commonwealth Writers’ Prize and the Hurston/Wright Legacy Award. A recipient of a 2008 MacArthur Foundation Fellowship, she divides her time between the United States and Nigeria.

Things Fall Apart by Chinua Achebe; Heart of Darkness by Joseph Conrad; Measuring Time by Helon Habila; I Do Not Come to You By Chance by Adaobi Tricia Nwaubani; The Famished Road by Ben Okri; The Cry, the Beloved Country by Alan Paton; Song of Lawino by Okot p’Bitek; Palm-Wine Drinkard by Amos Tutuola.
Learn More About The Thing Around Your Neck
print

Chemistry
Back to Top