In This Dark House Reader’s Guide 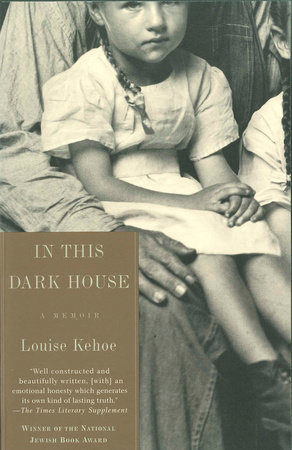 In This Dark House Reader’s Guide

From the first page until the final revelation, Louise Kehoe’s In This Dark House is a riveting memoir of the author’s life-long struggle to understand and be loved by her tyrannical and enigmatic father. We hope the questions, discussion topics, and author biography that follow enhance your group’s reading of this complex work: at once a memoir, an intriguing mystery, the portrait of a family profoundly shaped by the circumstances of history, and a fascinating exploration into the recesses of the human psyche.

Berthold Lubetkin, a Russian architect famous for his contribution to modern architecture in England, had reached the height of his career and fame in 1939. Then he abandoned his practice and moved with his young wife to a remote farmhouse in the Cotswolds. His youngest daughter Louise’s vivid recollections of her agonizing childhood in the isolated farmhouse are dominated by her brilliant father’s tyranny and frequent violence, interspersed with taunting doses of his magnanimity and irresistible charm. Lubetkin promoted sibling rivalry—frequently goading two of the three Lubetkin children against the other—and he guarded jealously their mother’s love, begrudging it to his children. In response, Louise’s feelings teetered helplessly between desperate love and fear mixed with loathing. Told by her parents that her father’s name was an assumed one, Louise and her brother and sister grew up without any clues as to their father’s past or knowledge of his family and, consequently, little explanation for his temperamental behavior. Louise struggled as an adult to find happiness in her career and in her marriage, finally escaping the long, controlling hand of her father but failing to overcome the permanent psychological scars of her childhood. Yet her craving for her father’s love still captivated her, and she continued to be mystified by his secret past. Not until after her father’s death was Louise finally able to seek the truth. In discovering her father’s true identity and an explanation for his behavior, Louise finds her own lost self.

1. By her own account, Louise was more influenced growing up by her mother’s Christianity than any other religion (p. 86). Why, then, does Louise decide to become officially Jewish? Is she reclaiming her father’s heritage for him out of a sense of obligation to her father’s family? Or did Louise long to have a heritage, any heritage, after being denied it for her whole life? Or is becoming Jewish the ultimate revenge on her late father?

2. Louise realizes with hindsight that there were many clues during her childhood of her father’s true identity as a Jew (p. 221). In the same manner, does Louise provide enough clues from the beginning of her memoir to enable the careful reader to surmise the mysterious identity of her father? What clues were the most effective or revealing? Does Louise successfully blend the genres of mystery and memoir, and, if so, how?

3. Louise explains her father’s personality as an “extraordinary union of heartlessness and humanity” that made him irresistible to his family (p. 54). Do the examples she provides support this characterization? Compare how Louise develops the positive attributes of her father to how she develops his negative attributes. Does Louise’s method of developing her father’s character enable the reader to empathize with her conflicting feelings of love and hate?

4. Louise writes: “One thing is certain, though: he never forgave himself for the death of his parents. He hated himself for failing to save them, hated himself for surviving, for living through the war in the safety and serenity of rural England. And, having hated himself to capacity, he let his bitter self-loathing spill over to taint his children, those three dark-eyed, dark-haired echoes of himself, who reminded him daily of his parents and his past” (pp. 216-17). How convincing is Louise’s explanation of her father’s behavior once she learns the truth of his past? Does Louise’s explanation justify or excuse her father’s behavior toward her and her siblings? Does Louise forgive him posthumously?

5. In her disclaimer at the beginning of her memoir, Louise states: “This book represents the truth as I see it, but because of the sheer complexity of the story it has been necessary to introduce occasional elements of fiction.” In some instances, such as Louise’s relaying of her parents’ courtship and her father’s reputation before his marriage (pp. 8-11), Louise does not provide the source of the information. However, in other instances, such as the quote from her father’s Book of Grievances (p. 67), the source of the information is clearly revealed. Do these different methods of retelling her and her family’s history have any effect on the persuasiveness of Louise’s memoir? Does Louise’s memoir absolutely defy her father’s dictum: “Facts do not exist” “There are no such thing as facts” (pp. 35 and 213)?

7. From Louise’s childhood “house”—The World’s End—to the “dark house” of the poem, what different images does the motif of the house convey throughout her memoir? Why did Louise quote the entire poem In This Dark House, by Edward Davison (p. 155)? Do the images conveyed by the poem reflect Louise’s feelings for The World’s End or those of her mother, and what is the significance of Louise choosing to entitle her memoir with a poem recalled by her mother’s last words? Does Louise reconcile the different feelings her parents have for The World’s End with her own feelings for the house?

8. Louise writes: “Mama was as bewitched by him as we were, and it was she who fed and fueled the natural longing we had to be loved by him, and who shielded the flame and kept it alive when his volatile temper and blistering anger threatened to extinguish it entirely” (p. 54). Mama was at once “the older sister,” who encouraged Louise’s father’s bad behavior by her silence and her own desire not to incur his wrath (p. 89), and a mother who stood up to her husband and defended her children (pp. 66-67). How would you describe the family dynamic—was it all controlled by Louise’s father, or did her mother have any control? Whose actions—or lack of action—were more pivotal to the family’s interrelationships? What was her mother’s role in creating the family dynamic?

9. Louise writes of her mother: “However much she loved us… still her love for Dad surpassed everything else” (p. 93). And, in her next paragraph, she writes: “How lucky we all were to be loved by such a woman; what a precious gift she was to us all” (p. 93). Is there significance in the juxtaposition of these two thoughts, especially in light of her father’s admonition to his children upon his wife’s death: “You’ll never know what you’ve lost!” (p. 154)?

11. So many questions remain at the end of the memoir: What is Louise’s own marriage like? What is her current relationship with her siblings, and how did they overcome the sibling rivalry inculcated into them as children? What were Sasha’s and Steven’s reactions to the truth about their father and their involvement in uncovering the mystery? What is Louise’s relationship with her mother’s family, if any? Why did Louise choose to end the memoir where she does and leave these and other questions unanswered?

12. Louise writes that “disloyalty haunted” her father (p. 65), and she recalls him being very moved by the passage in Dickens’s Great Expectations in which the newly made aristocrat Pip disclaims his humble, lower-class father (p. 81). Was Lubetkin truly afraid of his children rejecting him, as Louise guiltily thought as a child, or is it her father’s haunting memory of his own disloyalty to his parents of which the passage reminds him? Why else might Berthold, the self-avowed Communist, have been taken by this passage?

13. Characterize the marriage between Louise’s mother and father. How might their relationship in and of itself affected Louise in her adult life? Does Louise recognize these effects?

14. Louise states that “she grew up feeling transparent,” and when she tried to lock her door to get privacy from her family, she was, ironically, accused of secretiveness—something profoundly disapproved of in the Lubetkin family (p. 102). What other ironies occurred in her life because of her father’s secret?

15. Why was her parents’ reaction to her experience with the doctor in Bavaria the event that pushed Louise to leave them and The World’s End, and not any of the other cruelties heaped upon her by her father?

16. Steven confided to Louise: “We’ll never be free until Dad’s dead” (p. 104). Does Louise answer the question of whether she is finally “free” from her father?

Louise Kehoe is a freelance journalist and garden designer living in New Hampshire, with her husband. In 1996, the BBC aired The Lives of Berthold Lubetkin, which chronicled Lubetkin’s public success as an architect and his private identity through the documentation of Kehoe’s search for her father’s past.
Learn More About In This Dark House
print

Laughing in the Dark
Patrice Gaines

The Other Side: Growing up Italian in America
Vincent Panella

Migrations of the Heart
Marita Golden

Ma, Now I’m Goin Up in the World
Martha Long

The Man Within My Head
Pico Iyer

On the Water
Nathaniel Stone

The Rooms of Heaven
Mary Allen

The Making of a Writer, Volume 2
Gail Godwin

On the Outside Looking Indian
Rupinder Gill
Back to Top