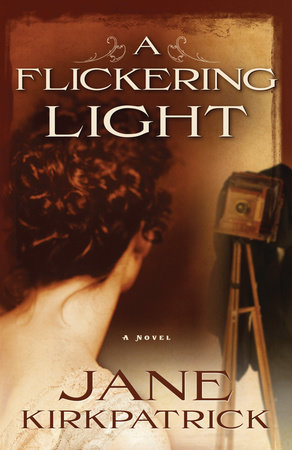 At prearranged times, the author makes herself available by speakerphone to answer questions and participate in book group gatherings. She’s done this from the Netherlands to Nebraska, from Florida to the Pacific Northwest. Arrangements can be made through her Web site at www.jkbooks.com. The use of this guide is not a prerequisite for such phone gatherings.

1. In the author’s own notes prior to writing this story, she described her attitude toward A Flickering Light this way: “This is a story about integrity, wholeness, the blend of soul and role in order to fulfill God’s promise in our lives.” Did she accomplish that goal? Why or why not?

2. What did Jessie Ann Gaebele think she wanted? What got in her way of achieving that? Or did she achieve her goal?
What role did her being a woman in a man’s profession play in the arc of her story?

3. What does Emily Dickinson’s poetic line “Tell all the Truth but tell it slant” have to say about this novel? How do the lines “The Truth must dazzle gradually / Or every man be blind—” apply?

4. How did a sense of unworthiness affect Jessie’s decision making? What role did grief play? How did her sense of self affect the outcome of this story?

5. Who in this story deceived themselves the most: FJ? Mrs. Bauer? Jessie? What truths did they have to tell themselves
in order to change the paths they were on? Did they? Why or why not?

6. Do you know gifted people who appear to sabotage or squander their talents? What kinds of actions by others can bring them back, or must one make such a journey alone?

7. Have you ever acted in ways that were contrary to your own self-interest? What might have motivated you? What lessons did you learn from that experience?

8. People engaged in clandestine activities often justify their thinking. A common thread of thought is, No one else is being injured by my actions. In this story, who was adversely affected? Is there anything these people could have done to
change their own destinies?

9. How can we offer compassion to people we love who make poor choices, without preventing them from discovering their own truths? Has there been a time in your life when someone spoke the truth with less dazzle so you could see it?

10. What role did artistry play in the lives of these characters? For whom did a particular art form (such as music, textile
creation, and photography) provide direction? How?

11. What do you think of the definitions of faith, hope, and love offered by Edward Everett Hale at the beginning of this novel? Did the characters portrayed act in ways that demonstrated those “three eternities”?

12. While most of the story was told in third person, through the eyes of Jessie, FJ, and Mrs. Bauer, what role did the first person accounts and photographs play in your experience of this story? Did their presence distract, or did you look forward to what the next photograph would reveal about Jessie’s life?

13. A Flickering Light is based on the story of the author’s own grandmother. Does that knowledge in any way shape your reading of the book differently than a novel that is formed of fully imagined characters? Were you aware of this prior to reading A Flickering Light? Does the timing of that awareness change your perspective on this story?

What Once Was Lost
Kim Vogel Sawyer

The Grace That Leads Us Home
Kim Vogel Sawyer

Secrets of the Heart
Joanna Lacy and Al Lacy

Just As I Am
Kim Vogel Sawyer

A Time to Love
Joanna Lacy and Al Lacy

The Linnet Bird
Linda Holeman
Back to Top