MAESTRA author, L.S. Hilton, came on the show to talk about the book that has it all: art, travel, money, sex, pop culture, food, feminism, and murder. She even has a stalker and is currently accepting applications for a proper troll. Learn about the book here: 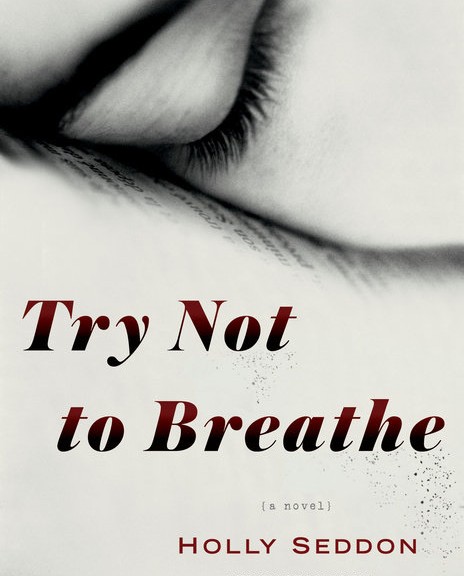 The manuscript of Try Not To Breathe came in to me at about 9:30 one night and due to some happy intersection of title and description and still being too awake to go to bed, I made a cup of tea at about 10 and decided to glance at a page or two before turning in.  At about 1 a.m. I forced myself away from the book for the night but could barely fall asleep – so full was my head and my heart of the story of the two young women Holly Seddon had created.  When I was in the world on her pages I had that magical and delicious feeling every lifelong reader knows when your actual surroundings melt away and all you can see are the streets and houses the characters are seeing. I finished reading the manuscript the next night and for days after I couldn’t stop thinking about Amy and Alex and what both joined and separated them.

Hopefully without giving too much away, the novel is about two women, Alex and Amy, both 30 years old and from the same area of England, where they grew up going to neighboring schools. Told in alternating points of view, their lives intersect in a way that will change everything for both of them. Alex is a journalist whose life has spiraled completely out of control. She had seen tremendous success as a writer very early in her twenties when she beautifully and movingly documented the last year of her mother’s struggle with terminal illness. During this time she became incredibly sought after in London magazine circles and also married the love of her life. But when her mother dies, Alex loses her moorings and plummets into alcohol and reckless behavior, finally moving back to the house she had grown up in.

When Alex is at her local hospital one day working on a small, routine story (the only kind of writing work she can now get)about vegetative cases – she finds herself staring at a young woman, a patient, asleep. The girl looks familiar to her, and suddenly she realizes that  this is Amy Stevenson, a girl who had disappeared when both she and Alex were 15, only to be found near death in the woods. Amy has been in a coma ever since, and the police were never able to discover who had assaulted this girl. Amy’s family and the whole town were left mystified and damaged.

Alex finds herself haunted by her own memories of that time and cannot stop herself from beginning to investigate the story. She realizes that in the fifteen years since the attack, Amy has gone from being at the center of notoriety to having been nearly completely forgotten.

Of the many themes explored by Holly in the novel, two are favorites of mine. One is the phenomenon of locked in syndrome, which Holly researched and uses so brilliantly for the character of Amy, showing us the heartbreak of a young girl trapped mutely within her body.  My other favorite is the music of the novel. From its title on, Holly has imbued her book with a perfect soundtrack as iconic song after song from the early to mid-90s seems to play in the background. And by the end one can see that Try Not To Breathe isn’t just an R.E.M. song title but helps introduce one of the most compelling facets of the novel – the false promise of control, and the beauty and wonder of watching Alex measure out just enough courage each day to fight her demons one more time.

Listen to an excerpt from the book here:

Read more about Try Not To Breathe below.