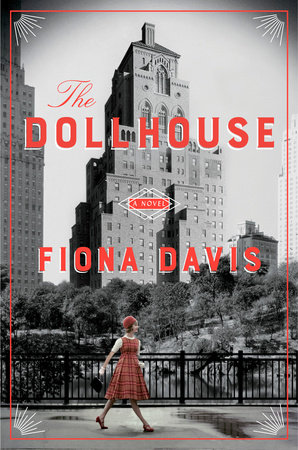 Editors get very passionate about books they work on – the Editor’s Desk series is his or her place to write in-depth about what makes a certain title special. Get the real inside-scoop on how books are shaped by the people who know them best. The concept isn’t novel, yet it’s still so often surprising—and always, always, important. The Dollhouse by Fiona Davis embodies this theme in many different ways. Firstly, there’s the title itself. “The Dollhouse” was the nickname for New York City’s iconic Barbizon Hotel for Women– called such because of all the pretty young things that lived there. But the Barbizon housed more than pretty faces: from 1927 to 1981, the Barbizon was a safe, respectable haven for young women looking to make their mark on the city as models, actresses, editors, secretaries, or wives. Many were successful, including Joan Crawford, Grace Kelly, Sylvia Plath, and Candace Bergen– all residents of the Upper East Side’s most coveted sorority. It’s a glamorous history, and what drew me to the novel in the first place. And in that regard, The Dollhouse delivered: I read it in one sitting, entranced by famous musicians in seedy jazz clubs, fashion shows in solariums, and the descriptions of delectable spice blends you can almost taste as you turn the pages. But looks can be deceiving, and The Dollhouse is so much more than glamorous. It’s a mystery; it’s an exploration of the changing rolls of women in the workplace, and what it means to be fulfilled as a woman; and it’s an ode to the many sides of New York City. And for these reasons, the Dollhouse is a novel that has stayed with me ever since I first read it over a year ago– and I know will continue to stay with me for a long time to come. The Dollhouse is a dual narrative, centering on three fictional women who are tied together not only by the Barbizon, but by a hidden tragedy that occurred there. There is shy Midwesterner Darby, who arrives at the famed hotel in 1952, determined to become a secretary and secure lifelong independence without a man. Instead (in scenes that highlight the power of female friendship), she befriends Esme, a Barbizon maid looking to become a star, in spite of prejudice against her as a Puerto Rican immigrant. Esme introduces her to another, darker side of the city— not to mention a boy who just might change Darby’s mind about remaining single. Fifty years later, the Barbizon, now gone condo, is home to journalist Rose, until she is unceremoniously dumped by her live-in boyfriend, leaving her homeless as well as heartbroken. She crosses ethical boundaries in her desperation to distract herself with a juicy story: the truth behind her elderly neighbor Darby’s rumored involvement in a deadly skirmish with a hotel maid back in 1952. The tension of the mystery simmers throughout the novel and kept me flipping the pages as Darby’s and Rose’s stories intertwine to reveal the shocking truth. Rose’s fascination with Darby opens her eyes to the rich history of the building, and her research into the elderly denizens of the Barbizon– like Darby, all single women who never left the former hotel, now in rent-controlled apartments on the fourth floor– inevitably causes her to look inward. Is this her future? Is she destined to be lonely and forgotten? Rose’s story is one that resonates in today’s world: What roles do relationship status, career, and autonomy play in living a fulfilling life as a woman? Can women “have it all” … and can they be happy if they don’t? As Rose digs deeper, including talking to Stella, another Barbizon resident (and one of my personal favorite characters in the novel!), she is treated to a wealth of insights on life, happiness, female agency, and empowerment… from women she herself had dismissed for their age and single status, for how they appeared on the surface. And then there’s New York City. From the cloistered Barbizon (“God forbid we venture into the real world and buy something inap­propriate,” a character named Charlotte wryly observes to Darby while they attend a fashion show within the hotel) to the uninhibited jazz clubs, from the city’s charms to its dangers, from the 1950s to today, The Dollhouse truly captures the beautiful, fickle, and ever-changing heart of Manhattan. It’s not an easy task, but Fiona’s passion for research— she, too, is a journalist— and writing skill bring the city as alive as any one of her nuanced characters (another moment here to appreciate Stella, for it is not only the protagonists who are incredibly drawn in the novel. I could take the time here to tell you why Stella is so fabulous, but a character that wonderful is best experienced for yourself). When I first received The Dollhouse on submission, I knew it was something special. But looks can be deceiving, and I didn’t know just how special until I fell into its pages. I hope you too have a chance to read this glamorous, suspenseful, romantic, thoughtful, and affecting novel. Learn more about the book below!

We know readers tend to be writers too, so we feature writing tips from our authors. Who better to offer advice, insight, and inspiration than the authors you admire? They’ll answer several questions about their work, share their go-to techniques and more. Now, get writing! How would you recommend creating and getting to know your characters?  The most important task is to figure out what your characters’ goals, history and personality quirks are – what they most want from life, and why. And for characters who live in an earlier time period, there’s the additional task of conveying what life was like back then. Since part of my book takes place in the early 1950s, I headed to the library and read old newspapers and magazines, scrutinizing the advertisements as well as the articles. I also listened to the music of the time period, from bebop to Rosemary Clooney, to get a sense of popular trends. Is there something you do to get into a writing mood? Somewhere you go or something you do to get thinking? The Met Museum in New York City is a great place to be inspired. I was lucky enough to catch the designer Charles James’s exhibit while working on The Dollhouse, and the fabrics and styles perfectly captured the essence of 1950s fashion. A run around the reservoir in Central Park can be helpful when I’m trying to solve a plotting problem or visualize an upcoming scene. I find I procrastinate for a good hour before getting down to the actual business of writing. This can include doing laundry, checking email, and reading the paper, until the guilt becomes inescapable. But once I start, I fall into that state of flow and become unaware of time passing. I love that feeling. Did you always want to write? How did you start your career as an author? I got a master’s degree in journalism from Columbia University, which taught me how to research and do interviews and write on deadline, and all those skills transferred over to writing fiction. When you’re used to writing every day, it’s easy to power through the painful moments of the first draft, knowing you can clean it up later. The process isn’t precious, it’s just work. What clichés or bad habits would you tell aspiring writers to avoid? Do you still experience them yourself? I have a Post-it on the bulletin board above my desk with the heading “Bad Words” written on it: these include “realized, wondered, felt, saw, thought, and heard.” Once I’m done with the first draft, I search for each bad word and instead use deep point of view. (For example, replacing “She heard the cat meow,” with “The cat meowed.”) Makes the writing simpler and more powerful. Luckily, I’ve gotten to the point where I usually catch myself before using them, but you can never be too sure. What are three or four books that influenced your writing, or had a profound effect on you? The Perfume Collector by Kathleen Tessaro is set in two decades, the 1950s and the 1920s, and her attention to detail and descriptions are breathtaking. The Lottery by Shirley Jackson, published in 1948, is eerily timeless, as is People of the Book by Geraldine Brooks. I swear Brooks traveled back in time to write that one, it’s so rich in setting and character. In high school, I had a teacher who instilled an early love of Shakespeare, and the musicality of Macbeth definitely stuck with me. Learn more about the book below:
Back to Top