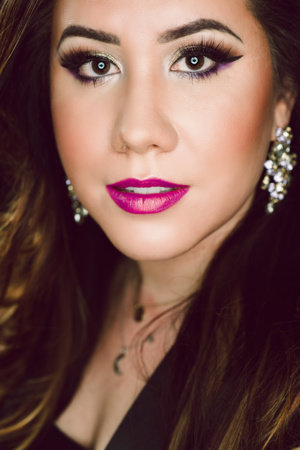 Renée Ahdieh is the author of the #1 New York Times bestselling The Wrath and the Dawn and The Rose and the Dagger. In her spare time, she likes to dance salsa and collect shoes. She is passionate about all kinds of curry, rescue dogs, and college basketball. The first few years of her life were spent in a high-rise in South Korea; consequently, Renée enjoys having her head in the clouds. She lives in Charlotte, North Carolina, with her husband and their tiny overlord of a dog.

The Wrath and the Dawn

Renée Ahdieh is the author of Flame in the Mist: a novel set in a world of ninja, samurai, and magic. We spoke at SDCC 2017.

PENGUIN RANDOM HOUSE: What is Flame in the Mist about? Could you describe the book for our readers?

Renée Ahdeih: Flame in the Mist is the story of Mariko, a girl whose caravan is ambushed by a clan of ninja on her way to the imperial city of Inako. She’s very nearly assassinated. When she escapes, she decides to infiltrate the clan dressed as a boy, and learn why it is that they tried to kill her. She unravels a world of mystery, magic, and murder, and the story juxtaposes the culture of the ninja alongside the samurai.

PRH: How did you come up with the story?

RA: It’s a mashup of all the things that I really loved to read. Basically, whenever I’m writing, I’m writing stories for myself. My first series was inspired by ancient Persia. My husband’s family is Persian. This book series is inspired by feudal Japan. My mother is South Korean, so I always knew I wanted to bring an east Asian world to life. I’ve always loved stories like The 47 Ronin, and I really liked the idea of mirroring western ideas about knights, and eastern ideas about samurai. Both lived by a similar code of ethics, a code of honor, but as we all know, that isn’t what it’s chalked up to be in real life.

PRH: I’ve read that some samurai worked on the side as ninja.

RA: The interesting thing is that a lot of the research, especially into the early generation of ninja, indicates that they were contracted by samurai to do the things that their code of ethics forbade them to do. Samurai could not engage someone from behind or from the shadows, because these actions were dishonorable. I find it that interesting, because If you’re paying for someone to do your dirty work, then you’re still responsible for it.

PRH: Ninja are bad guys, right? Or is there another side of them that we don’t know?

RA: I disagree. I don’t think they’re bad guys, but because they operate from the shadows and have this sort of illicit atmosphere around them they have a bad guy reputation. I wanted to show what a ninja would do in a world where a few people own everything and the peasants who work for them are akin to slaves. What if you had ninjas who looked more like Robin Hood?

PRH: It’s easier to romanticize knights and samurai if you don’t think about the people who were oppressed by them. How did you resist romanticizing them?

RA: I don’t think it’s something to resist. You can embrace it at the same time you draw attention to it. There is something beautiful about the idea of knights and samurai — the arts, the music. There is beauty to be found there, but it is really irresponsible of us in any situation to not see the flip side of that. I think you can. You can talk about the grandeur of the court, the clothing, the food, and the fact that it is so highly ritualized, but you have to understand that it is built upon a foundation of oppression. You can’t ignore it.

PRH: The ninja didn’t leave much of a record. There are scrolls here and there, but the history of the ninja is quite contentious. How did you go about researching the subject and choosing what you wanted to include in the novel?

RA: I turned to a lot of the literature: anything that had to do with the way of the warrior, bushido, and of course I read the scrolls, like the English translation of Bansenshukai, or Sea of Myriad Rivers Merging. Everyone says that it is the very earliest ninja scroll that you can find. I also read a lot of the philosophy of that time, like Miyamoto Musashi’s Book of the Five Rings. I liken it to Sun Tzu’s The Art of War. It is very much in line with an almost militaristic way of thought that developed alongside Confucianism. It was interesting to see how those paralleled in some ways.

PRH: It is getting any easier for writers of color and characters from diverse backgrounds to reach readers? I look at manga and anime, both of which are extremely popular now, and wonder if there’s been any kind of carryover effect in prose.

RA: I want to say yes, that I think I see things moving forward in the right direction, but there’s still so much work to be done. I find myself often asked to be on diversity panels, and I long for a world where that isn’t necessary: where diversity is already integrated into everything from festivals to a publisher’s book lineup. I’ve been really lucky that my publisher has embraced books for the sake of a good story. If it happens to be that there is diversity already integrated into these stories, then that’s wonderful. I love issue-driven books, they are necessary, but I really want to all see these issues be incidental to the narrative, especially in the books we’re putting in the hands of young readers; that everyone is reflective of the society in which we live.