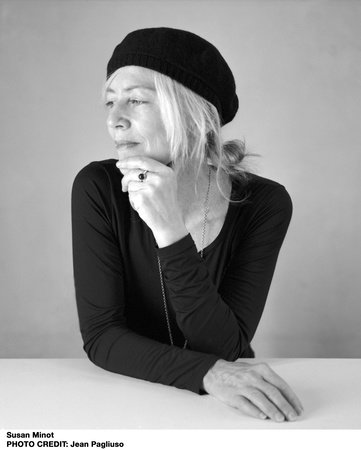 SUSAN MINOT is an award-winning novelist, short-story writer, poet, and screenwriter. Her first novel, Monkeys, was published in a dozen countries and won the Prix Femina Étranger in France. Her novel Evening was a worldwide best seller and became a major motion picture. She received her MFA from Columbia University and lives with her daughter in New York City and on an island off the coast of Maine.

Why I Don’t Write

Lust and Other Stories

PENGUIN RANDOM HOUSE: Quoting from a chapter on Jane, “Here she was reading about hostages and terrorists and the high school girl in her was wondering if a boy she liked her back. It was ridiculous. Still she didn’t drop it.” In moving between narratives focusing on Jane and Esther, how did you transition from the urgency of Esther’s circumstances to the relatively placid environment of Jane and her traveling companions?

SUSAN MINOT: I’m not sure I can describe any “how,” but can answer to the choice to include both experiences in the book. Obviously, Esther’s situation is not only more dire, but seemingly more crucial somehow in terms of what is a “harder” struggle. Living in a violent situation raises the stakes of life higher. But other struggles, in other circumstances of life, still remain, and I wanted perhaps to remind the reader of that, and in doing so, throw both of the stories into a new relief.

PRH: You reference Melanie Thernstrom’s article, Charlotte, Grace, Janet, and Caroline Come Home, in the notes of your novel, admitting that it served as a huge source of inspiration. What was it about that article that planted the seed that grew into Thirty Girls? It’s stunning, yes – but was there some bit in particular that spoke to you?

SM: The article by Thernstrom served as research. The seed of the book came directly from my life and from a trip I took to Uganda to report on the abducted children in 1998. I wrote a nonfiction article about it, but the situation of the girls haunted me and fifteen years later I felt I could write something more.

PRH: Your descriptions of traveling through Africa are beautiful in their detail. Did you spend much time there as part of your research?

SM: The time I spent in Africa had no research aspect to it. Long before I wrote the book, in the late nineties, I spent some time in Eastern Africa, so I was familiar with the landscape and some of its places.

PRH: Can you talk about the importance of bringing such heavy issues out into the world via fiction?

SM: Nonfiction is the standard form through which historical stories are told. Certainly, nonfiction covers the terrain of the outside world. I thought, as a novelist, to try to explore this particular historical situation – a horrific one pretty much ignored by the world – of the children kidnapped by Kony’s LRA from a more interior perspective. Reading about horrendous events is hard for a reader, and why would one want to do it sometimes? A story focusing on one person’s experience, from the inside, offers the reader a chance to enter this experience, perhaps in a more personal way, and by inhabiting it, learn about it that way. At least, that’s the idea. Of course in a more general way, these “heavy issues” of violence and enslavement are part of the human drama, regardless of whether they are a current issue or not.