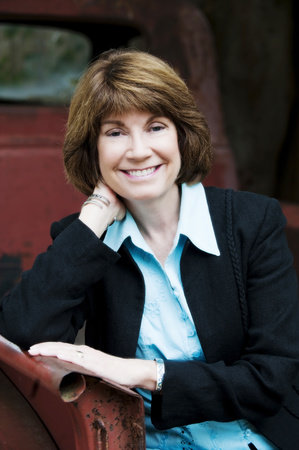 Ann Weisgarber was longlisted for the Orange Prize, was a finalist for the Orange Award for New Writers, and won the Langum Prize in American Historical Fiction and the Texas Institute of Letters’ Steven Turner Award for Best Work of First Fiction for The Personal History of Rachel DuPree. She holds a master’s degree in sociology and has worked as a social worker and has taught high school and college. Born and raised in Kettering, Ohio, she has also lived in Boston and Des Moines and now divides her time between Sugar Land and Galveston, Texas, the setting of her novel The Promise, about a woman living through the Great Gulf Hurricane of 1900.

Q. This novel captures a slice of history that many Americans know little about. How did you become interested in writing about African American ranchers in South Dakota?

I've always been drawn to the West. During one of my trips to the South Dakota Badlands, I came across a photograph of a woman sitting in front of a sod dugout. Three things about the photo caught my attention. The woman was alone, she was unnamed, and she was African American. Until then, I hadn't been aware of African American settlers in the West. I did some research and discovered there were African American cowboys and soldiers. I dug deeper and found bits and pieces about black pioneer families. The photographed woman must have been one of those people, and it bothered me that history had overlooked her story. I gave her a name, Rachel DuPree, and began to write.

Q. Given that Rachel DuPree or her real–life counterparts are unlikely to be found in textbooks, “personal history” is an apt title for this book. Can you talk about what it means to you?

The title was the inspiration of one of my editors. Initially I wasn't thrilled with it—I was concerned the word "history" might imply the book was nonfiction—but I've grown to love it. The personal details of Rachel DuPree's story are hers alone. Yet her history is shared by many of the forgotten women who bore the hardships of being pioneers.

During my research, I found an African American couple in South Dakota whose names were Isaac and Rachel. I also found another couple whose last name was DuPree. I combined the names to honor those Americans. I did the same for three of the Indian characters. Mrs. Fills the Pipe, Inez, and Luther were the names of people I found while researching the Sioux.

Q. The language in this novel is spare and unadorned, almost reflecting the DuPrees' open, unspoiled stretch of land. As you wrote this book, did the landscape consciously inform your prose style?

I didn't have a choice. The landscape is such a dominant force that everything else feels small and insignificant. My spare language is my reaction to the Badlands' harsh but beautiful landscape. It is my response to its complicated history that is layered with hope and with heartbreak. It also fits Rachel and Isaac, whose determination to achieve better futures for themselves and for their children dominates all other concerns.

The dialogue between Rachel and Isaac is also spare. Their days are spent together; there wouldn't be all that much to discuss. They rely on nonverbal communication. The unspoken is as meaningful as the spoken.

My writing style is somewhat different in the Chicago scenes. The descriptions are more detailed and the dialogue includes longer sentences. That is my way of reflecting Rachel's youth and the busyness of her life in a city.

Q. You capture so many interesting details throughout, from the way Rachel keeps house to the fact that ranchers never eat steak. How did you conduct research for this novel? Did you research before you wrote the story or did you write first and research later?

I researched as I wrote and every page reflects research. I found it impossible to write a scene unless I knew the details were right. The most helpful written resources were children's nonfiction books. The details were well explained and included illustrations. Often the research led to unexpected discoveries. Whilereading about Chicago and slaughterhouses, I stumbled across Ida B. Wells–Barnett. When I was reading about the Dakota Sioux, I became interested in the children who went to boarding schools and who were then assimilated into the white culture.

I was fortunate to have a writing residency at Badlands National Park. This was a chance to talk to people who lived there. A woman who grew up on a cattle ranch told me she'd never tasted steak until she was in her midtwenties. Another woman said there was more to Native Americans than the stereotypical image of warriors. In some form, much of this information found its way into the book.

Q. Was it challenging to take on the point of view of a young African American woman in the early twentieth century, or did you find that Rachel DuPree's voice came naturally to you?

It was a challenge. I had to step back in time to see the world as people did in 1917. I had to shake off modern ideas about marriage, child rearing, race, and prejudice. I had to learn about 1917 black culture and experiences.

When I started the rough draft, there was one thing I knew for certain about Rachel DuPree. She had dignity. As I worked through each draft, Rachel's voice appeared. Isaac was also difficult, and in the early drafts I didn't feel comfortable with him. Mrs. Fills the Pipe and her daughter, Inez, were other challenges. Native Americans have often been misrepresented in literature as stereotypes. I did not want to do that to these characters.

I wasn't in a rush while writing this novel and that allowed the voices to come to me.

Q. In some ways this is a narrow slice of history, yet the themes you explore are universal. Do you see this book as belonging to a particular literary tradition?

I see the book as literary historical fiction. The themes of commitment, ambition, sacrifice, and prejudice are layered throughout the story. The norms and values of 1917 shape the characters' beliefs and responses, and historical figures, such as Paul Laurence Dunbar and Ida B. Wells–Barnett, impact the characters.

Q. By the standards of her time and social class, Rachel DuPree is a very independent–minded woman. Do you consider her a feminist?

I don't see Rachel DuPree as a feminist but rather as a woman who understands the norms of her era and works around them. She rarely challenges Isaac's opinions, she doesn't have money of her own, and she's tied to the cookstove and to child–rearing duties. Her defiance of Isaac is indirect. She keeps things to herself and makes her own decisions. During my research, I read diaries written by women. The ability to work around their husbands was a common theme.

Q. Isaac DuPree is a fascinating figure—for all of his blind ambition and callousness he is still charming and, at times, affectionate. How did his character evolve over the course of writing the book?

I'm quite fond of Isaac, although I had to write many drafts before I understood his character. Initially, he kept disappearing off the page because I wasn't sure what to do with him. When I eventually realized he was shaped by his military training and that he was desperate to prove his worth, his character grew. Isaac became a man of his times. He does not discuss feelings or worry about the happiness of his children. He became a man of the West. He is willing to make any sacrifice to keep his land.

Q. You've been a teacher and a social worker. How did these experiences prepare you to be a novelist? How did you decide to pursue writing as a career?

As a social worker and as a teacher, I learned to listen to what was said and what wasn't. My background in sociology pushed me to think about my characters as people of their times. It's natural to include references to literature, to music, and to popular culture. People don't live in vacuums and nor should characters. Rachel and Isaac are influenced by newspaper headlines as well as by events from the past.

Social class and prejudice are themes I especially like, although it is nerve–racking to write about them. The revelation of ugly prejudices in plain language is not comfortable. I had to remind myself that in 1917 a white woman would call Isaac "boy." I had to remember that in 1917 many people had negative opinions about Native Americans. Rachel and Isaac were not exceptions. I had to write about Native Americans as my characters saw them.

I decided to write a novel simply to see if I could. I didn't think about publication. Rather, I focused on the personal challenge of writing a beginning, a middle, and an end. After a few years of this, my thoughts shifted and I wanted to write the best book I was capable of writing. Eventually, I decided to see if publication was a possibility.

Q. For a first novel, The Personal History of Rachel DuPree is extremely ambitious. What do you look for in a novel subject, and what's next for you?

I enjoy stepping out of my own world and into the past. I'm interested in social class and power struggles. I'm currently working on a novel that takes place in 1900 in Galveston, Texas. The story revolves around a college–educated woman who marries a dairy farmer. The story begins two months before the 1900 storm, the historical hurricane that killed more than six thousand people.