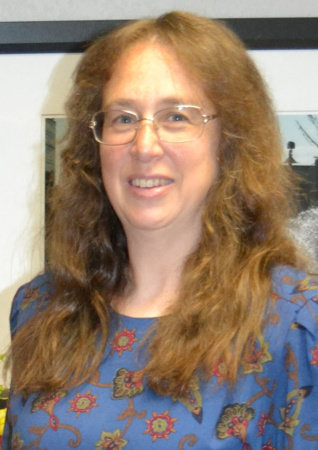 Mickey Zucker Reichert is a pediatrician, parent, animal lover, and author of more than 20 novels, including those in the Renshai Chronicles, Legend of Nightfall, and Beasts of Barakhai series. She has also written one illustrated novella and more than 50 short stories. Reichert lives in Iowa with her husband and two of their children and divides her time between taking care of her family, writing, practicing medicine, teaching at the local university, and tending the assorted livestock that roam her 40-acre farm.

Isaac Asimov’s I, Robot: To Preserve

Mickey Zucker Reichert is the author of enough novels to fill a good sized book case. Among them is her celebrated Nightfall duology: the story of a legendary assassin and thief. We recently spoke with Reichert about her famous antihero, and how a changing political climate has affected the way such characters are received.

PENGUIN RANDOM HOUSE: You’ve recommended The Legend of Nightfall in the past as a good starting point for readers new to your work. Why do you think so?

Mickey Zucker Reichert: I’ve received more fan mail for this book then any other, so I assume it is the so-called “fan favorite,” which means it’s more likely to appeal universally.  I want people’s first experience with my work to be a positive one . . . come to think of it, I’d like people’s experiences with all of my works to be positive.

Although every one of my novels stands alone (I have always believed that if someone plunks down money for a book or a movie, they deserve a complete experience — beginning, middle, end — even if there is to be a sequel), Legend was specifically written as a stand alone novel.  Although I did eventually cave to fan pressure and write a sequel (thanks fans; you were right and I was wrong, it was a great idea), Legend is a good introduction to Mickey Zucker Reichert and doesn’t force anyone to have to “read on” just to decide if they like my writing.

PRH: Nightfall is a formidable character with many talents: thief, assassin, sorcerer. You’re a person of many talents, yourself: pediatrician, mother, and of course, writer. Do you feel any kind of kinship with the character?

MZR: Wow, thanks!  Can you repeat the “person of many talents” thing to my kids?

As to the question: “God, no! He’s an assassin and a thief, as you so judiciously pointed out.” Honestly, I try not to see myself in any of my significant characters because I witness far too much of that mistake in other people’s writing. Authors who identify with their main characters not only tend to repetitiously reproduce the same main character in unrelated novels, they also make him or her sickeningly heroic (there are flaws, but they are always endearing), inexplicably attractive to potential lovers, the only character with a moral compass or, worse, they write the book to give themselves an adventure instead of Reader.

I know a professional author who either writes in first person or gives his main characters a name that is practically the same as his own. The main character is always the only male in the story who isn’t contemptible. Of course, all the female characters are good, kickass competent, and in love with main character (even the gay ones).

I hate this trend but understand it. In the current political climate, authors are held responsible for every word that leaves their characters’ mouths, even if the character is nothing like them. Every societal situation or expectation, no matter how historical or fantastic the world, is assumed to be condoned by the author. Even career historians are rewriting our past to keep their careers afloat or their reputations from being impugned. Your character can have no ethics, sell drugs to children and murder capriciously; but, if he or she is politically incorrect, Author is, by extension, a bigot. Is it any wonder that inexperienced authors have trouble separating self from character?

It’s a tough time to be a writer or a Reader. If this trend doesn’t pass soon, we will lose something very special: competent writing with three-dimensional characters who rationally express a variety of viewpoints.  As readers, we will lose the ability to open-mindedly examine things we don’t agree with or even understand as being different rather than blindly labeling every other point of view as evil.  It is easy to write books that toe the current political party line, much more difficult to make readers think outside the confines of their own opinions.

PRH: Nightfall isn’t a bad guy, but he’s not a knight in shining armor, either. Do you generally find these kinds of characters interesting to write about?

MZR: Legend was written on a dare. I was telling my friend and fellow author, Janny Wurts, about my first scribblings in junior high school, a series of mystery short stories about an assassin. Ray Feist overheard me and started laughing. He told me no way, no how could any writer make an assassin a likable enough character for any editor to buy these stories.

It was a very different time, when Butch Cassidy and the Sundance Kid only sold (even starring Redford and Newman) because it was made very clear that they never harmed anyone, at least in the movie version. There were stories with assassin characters, and a few were even not entirely contemptible, but nothing with an assassin main character.

Now, of course, characters with no redeeming qualities whatsoever are — terrifyingly in my opinion — beloved. But back then, it became my mission to create an assassin who readers could get behind and actually, even if grudgingly at first, root for.  It took several years (writing, editing, and publishing), and the political climate had already started to change, so I didn’t hold Ray to his $1000 bet, but Legend of Nightfall was created, bought and sold. In all fairness to him, I never did sell the mystery stories.

I do prefer to write about truly flawed characters trying to make it in circumstances steeply slanted against them, especially if they hew to the difficult but moral path (even if they have to be given a solid shove to adopt the moral path). Many writers rely on getting characters out of bad situations by giving them hidden or blatant super-talents or god-like benefactors or stupid antagonists, but I prefer characters who have to rely on their wits or hard-won skills, even though it is far more difficult to plot and write because Reader has to sincerely believe the character is well and truly screwed and the solution has to be foreseeable but unforeseen and definitively clever. This is one of the hardest things to pull off in writing, but it makes for the most satisfying climaxes and endings.

PRH: You’ve had a prolific publishing career. The last time I checked, you had something like 30 novels to your credit. How do you keep up this kind of pace? Is there a secret to longevity in publishing?

I don’t think of myself as particularly prolific, as many authors have a lot more books out in a much shorter timeframe.  Whether or not those are worth reading is entirely up to Reader.

I think I seem more prolific because I’ve been in the business a long time and started young. I got my first seriously interested New York editor when I was a teen. By my very early twenties, I was an M.D. and also a professional author.

Luckily, I have a wonderful editor in Sheila Gilbert and a loyal family in DAW Books, Inc. who stand behind their authors in so many ways, whether or not they “deserve” it.

PRH: While we’ve spoken here about one of your older books, do you have anything new you’d like to mention?

MZR: The Immortal Renshai is coming out in May 2018. It is the last Renshai book, which is kind of funny because the first Renshai book was titled The Last of the Renshai. Immortal is (I hope) a strong finish to what is essentially a nine book series (three separate trilogies) that spanned over 300 fictional years and close to three real-life decades.  As each of those books is the size of an end table (and they all, as previously mentioned, stand alone), it feels good to finally finish; it was becoming difficult to remain historically accurate and true to both canon and Reader.

By the way, the Renshai books were one of the inspirations for Game of Thrones, at least according to George R. R. Martin who asked me endless questions about Renshai and the process of writing long novels with new and clever plot twists and without becoming repetitious at a Chicago-area convention in the early 1990’s for many many many hours.

Prior to Immortal, my most recent projects were three I, Robot novels requested and sanctioned by the Asimov family and optioned to Paramount Pictures as projects for Will Smith. I am eternally grateful for the opportunity. Their titles are I, Robot: To Protect, I, Robot: To Obey and I, Robot: To Preserve.

Thank you for allowing me to mention those, and I wish you all the best of luck.