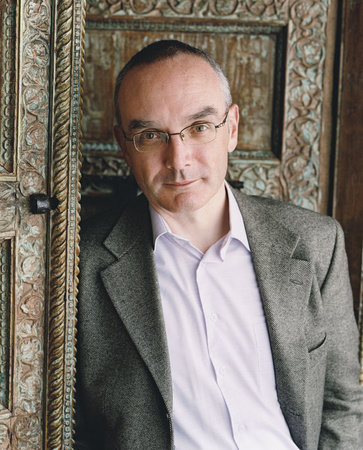 An authority on mythology and folklore, Michael Scott is one of Ireland’s most successful authors. A master of fantasy, science fiction, horror, and folklore, he was hailed by the Irish Times as “the King of Fantasy in these isles.” Look for the six books in his New York Times bestselling The Secrets of the Immortal Nicholas Flamel series: book one, The Alchemyst; book two, The Magician; book three, The Sorceress; book four, The Necromancer; book five, The Warlock; and book six, The Enchantress. You can visit Michael Scott at dillonscott.com and follow him on Facebook and Twitter.

The Secrets of the Immortal Nicholas Flamel, Books 1-3

Billy the Kid and the Vampyres of Vegas

The Secrets of the Immortal Nicholas Flamel

Michael Scott is the author of the New York Times bestselling series, The Secrets of the Immortal Nicholas Flamel.

I was a bookseller for most of my life.

My first job was as an antiquarian bookseller. Every day I dealt with books that were a century or two centuries old. Occasionally, I would manage to buy an incunabulum at auction. An incunabulum is a document or book printed before 1501. When you take them in your hands, you are holding half a millennium of history. And you cannot help but wonder at the extraordinary sequence of events that brought this incredibly fragile object into your hand.

For me, books have always been more than just the stories. My study is filled with books, from old classics to the latest young adult books. Thousands of books line the shelves, are piled precariously on top of each other, and are stacked on my desk. I love being surrounded by books, by their energies and their histories. I know where and when I bought most of them, which ones were gifts or review copies.

In the last couple of months, friends have suggested that I really should look at an eBook reader. I resisted. Understanding the concept of being able to electronically store thousands upon thousands of books, I certainly appreciated the technology, but I was skeptical that my reading experience would be as fulfilling.

However, I’m in the middle of researching a new YA series, which is global in scope, and, knowing that I had two ten-hour flights – plus four-hour layovers – coming up, I finally succumbed and bought an e-reader. I then downloaded assorted novels, some nonfiction research, a couple of classics (including my constant traveling companion, Huckleberry Finn) into my e-reader. And yes, I did download my own, too! I was tempted to bring along an actual paperback, but I resisted.

Once I was settled in my window seat, I pulled out the eBook. Within minutes I had forgotten that I was reading on an electronic device. I quickly became absorbed in the story and soon found myself absentmindedly turning pages with just a click. And the best part was that when I finished a chapter, or wanted a break from one of the books, there was a small library at my disposal, just a few clicks away. (And it saved me a fortune on excess baggage charges!)

I’ve come to really appreciate the eBook. I can have an entire library of research material in the palm of my hand. Now, that is nothing short of magical. I am reminded of the great Arthur C. Clarke’s quote, which dates back to 1961: “Any sufficiently advanced technology is indistinguishable from magic.”

I’ve a feeling Mr. Flamel would have appreciated the magic of an e-reader!