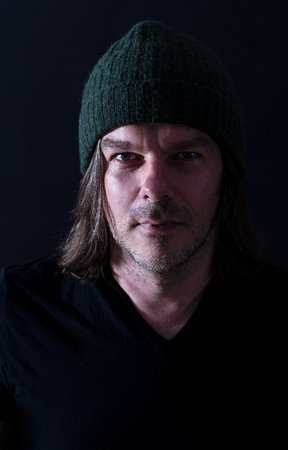 Sylvain Neuvel is the author of Sleeping Giants, Waking Gods, and Only Human. He is a linguist and translator based in Montreal. He is at work on an R2-D2 replica and his next novel.

Montreal-based linguist and translator Sylvain Neuvel has presented us with quite the debut novel. In Sleeping Giants, we meet a young girl named Rose who encounters the oddest artifact in the strangest of ways. Fast-forward a decade and a half, and here’s Rose again, now an accomplished physicist, about to uncover one of humanity’s biggest secrets. Read on for Sylvain’s thoughts on his format, the future, and science fiction.

PENGUIN RANDOM HOUSE: Much of Sleeping Giants is told through the format of an interview. Why was it important to construct your novel in this way? Had you originally tried writing it in straight prose?

SYLVAIN NEUVEL: I have a thing for epistolary novels. One of my favorite books of all time is Les Liaisons Dangereuses. I first read it as a teenager and it completely blew my mind. In many ways, the real story isn’t even in the book, because everybody lies all the time. I was the one who had to piece things together based on what I learned about the characters, and I liked that the author placed that kind of confidence in me. I was writing something completely different, but I also wanted my readers to participate, to figure things out on their own, and dialogue is a great way to do that. I also thought it fit the premise of Sleeping Giants. It had to feel real, and a world-changing event like this one would leave behind a trail of documents. In many ways, the format actually plays a part in the story. The interviewer in Sleeping Giants isn’t a literary device. He’s a character in his own right, arguably the most important one.

PRH: There’s a potent futuristic, fantastical feel to Sleeping Giants. Looking at the world we live in today, what do you see that has that fantastical element?

SN: We live in fascinating times. From a scientific and technological perspective, we are on the brink of so many life-altering breakthroughs. Artificial intelligence is in our sights. We are really close to curing every single viral disease with a single drug. We could double, triple our life expectancy in the near future. The most interesting part for me is how we deal with these life-altering changes. We are still learning to live with inventions of the twentieth century: the internet, social media, etc. The societal changes that might possibly happen during my son’s lifetime are almost impossible to fathom. It’s a great time to be a writer.

PRH: What’s your favorite science fiction book of all time?

SN: I would say Contact, by Carl Sagan, for the way it portrays our dealing with the idea that we’re not alone in the universe. Like “Close Encounters of the Third Kind” in movies, it’s a story about us, about our strengths and weaknesses. I also love Michael Crichton novels: The Andromeda Strain, Jurassic Park. You’ll notice all these books also have a lot of science in them.