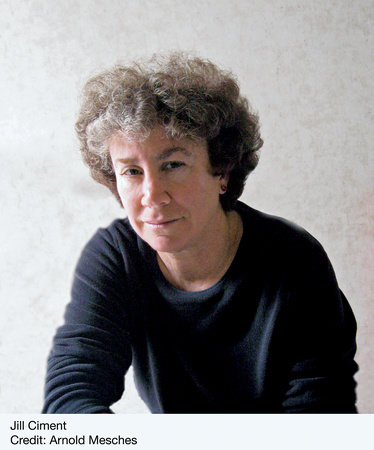 JILL CIMENT was born in Montreal, Canada. She is the author of Small Claims, a collection of short stories and novellas; the novels Act of God, The Law of Falling Bodies, Teeth of the Dog, The Tattoo Artist, Heroic Measures and The Body in Question; and a memoir, Half a Life. She has received many grants and awards, among them a National Endowment for the Arts fellowship, two New York Foundation for the Arts fellowships, the Janet Heidinger Kafka Prize, and a Guggenheim fellowship. A professor at the University of Florida, she lives in Gainesville, Florida, and Brooklyn, New York.

The Body in Question

The year 2015 is looking to be a big one for author Jill Ciment. She’s just about to release her seventh book, Act of God, a novel about a group of women living in the same Brooklyn townhouse that becomes ground zero for a glowing mushroom infestation that sweeps through New York. On top of that, her last novel, 2009’s Heroic Measures, about an elderly bohemian couple trying to sell their East Village apartment in the middle of a possible terrorist attack, serves as the basis for the upcoming film “5 Flights Up,” staring Morgan Freeman and Diane Keaton.

Penguin Random House recently got the chance to catch up with Jill Ciment. We talked to her about the new book, her last novel, the connection between the two, and the first feature film based on something she’s written.

PENGUIN RANDOM HOUSE: It seems like most people have become familiar with you in the last decade, but you’ve been publishing since well before then. How would you describe yourself as a writer?

JILL CIMENT: I have been a novelist from the get-go. My first collection of short stories had one that was 150 pages long. So I’ve gone the trajectory of a novelist, which is very different than people who write short fiction … When you’re a novelist, it is a very different life. You’re isolated for five years … it’s a different kind of production. Actually, it’s not even the novel; I only write novellas. That’s really what I write. I mean they’re published as novels, but essentially they’re novellas.

PRH: It feels like Heroic Measures and Act of God are tied to one another.

JC: They are. They’re companion pieces. If I had had the stamina, I would have waited to publish them in a single volume. Because one took place in winter and one took place in summer. And no book is about something specifically, but I’m inspired by trying to figure out stories that take the temperature of my times … And the two things that are on my mind, as they are for anyone alive today, is global warming and terrorism.

For Heroic Measures, what really interested me was that I was there [in New York City] for 9/11 and then for a couple years after … So I really wanted to write about the panic and, at the same time, I has friends who were saying, “I should have put a gas mask on and gone downtown and bought a loft.” So there was this really odd kind of experience and the thing that was really the inspiration for that book, was – I’m a pet lover obviously – a lost poster sign [for a missing pet] on one of the telephone poles near my house in the East Village. And after 9/11 everyone started putting up pictures of their relatives (as if they were wandering the streets and we were going to find them). But no one covered the lost poster for about four hours, and then there was just no room and the lost cat poster just went under the glut of human suffering. And I thought, That’s an interesting way to tell that story.

PRH: How involved were you in the filmmaking process for “5 Flights Up”?

JC: I found out about it because somebody sent me the link announcing the film in Variety. I had no idea they were even doing it. I mean, you option these books, but it’s a laugh when you option them … I didn’t see the screenplay, literally until the day before they started shooting. And I didn’t see the film until the producer came over and showed me the finished film.

PRH: What do you think of the casting for the main characters for the film? It’s two great actors, but they’re also big changes from what you wrote.

JC: It’s a fabulous cast. But the two last people you’d think to play old Jews are Morgan Freeman and Diane Keaton … The thing that was very interesting about the casting for me is that part of the story in Heroic Measures is about, essentially, old communists who lived their lives not believing in profit and are sort of put in this circumstance where they’re going to become millionaires and they’re taking advantage of a terrorist strike and it brings out their morality. Whereas Diana Keaton and Morgan Freeman are like a visual version of two people who’ve lived on the edge, because they would have married when it was illegal in thirty states.

PRH: You were talking earlier about your inspiration for Heroic Measures; can you do the same for Act of God?

JC: When I first moved to Florida, some friends of mine were eating dinner one night and someone said, “Is that a mushroom growing out of your wall?” And the next thing they knew the HAZMAT squad arrived and they were unable to enter their house again for six months … And then when we returned to New York, I was thinking all anyone was talking about was climate change. I mean that in the understated thing behind all conversations … and I thought, It’s such a boring topic, weather, there’s nothing you can really do with that. And then I kind of thought about the mushrooms again and I thought, You know, no one expects it to come this way, with this creepy horror thing. And then Sandy hit and I thought, God, that’d be a really interesting story … I wanted to do a kind of “Invasion of the Body Snatchers,” but New Yorkers are so real estate-oriented I thought I would do a kind of “Invasion of the building snatchers.” I’m working on the screenplay for that too.

PRH: Really? Did your experience (or lack there of) with “5 Flights Up” kind of inspire you to play a more prominent role in the adaption process?

JC: Yes. Well, I mean … I had written a screenplay once before for my memoir for this director. We were both kids. The director was Nicole Holofcener. Her last film was “Enough Said.” … But we were just kids and we couldn’t get it done. So when I came up with Act of God … she is very anxious to do it. And I sat down and wrote a draft of the screenplay and then I got the writer who was involved in “5 Flights Up,” Charlie Peters, to sort of take over, because I knew I’d taken it as far as I could as the novelist … But this time, I’d like to be involved. This time, it would be very interesting … God knows if we can get it made, but at least it’ll be interesting.