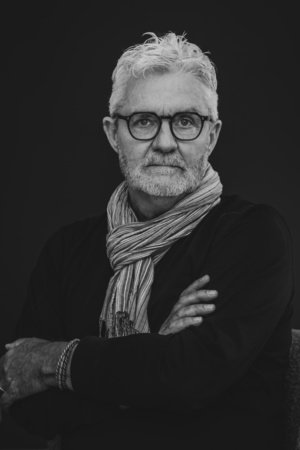 As an award-winning book designer and now author, CS Richardson has worked in publishing for over twenty years. He is a multiple recipient of the Alcuin Award (Canada’s highest honour for excellence in book design) and his work has been exhibited at both the Frankfurt and Leipzig Book Fairs. The End of the Alphabet, his first novel, has been sold in ten countries. He is currently at work on his second.

The End of The Alphabet

I once fixed WO Mitchell’s shoe.

The man of letters was visiting his publisher. During their meeting, at some athletic point of negotiation no doubt, one of Mitchell’s shoes became unglued. As did the publisher, who then press-ganged the only person at hand with the means to perform a little cobblery: myself, then a younger, all-too-eager-to-please design wonk. Spray adhesive and exacto knife in hand (these being the days of paste-up), I jury-rigged a reattachment of sole to upper, all the while wondering how I had gone from struggling through Who Has Seen The Wind? in high school to repairing the maestro’s footware.

My paternal grandfather was, among other things, the publisher of The Strasbourg Mountaineer, a weekly newspaper in the Last Mountain region of south central Saskatchewan. Grandfather William also wrote, edited, and typeset the paper. He sold advertising, bartered for homemade preserves in lieu of subscription payment, and no doubt hand-delivered the paper on more than a few occasions. It is believed that his wife Bessie (a no-nonsense schoolteacher who insisted her grandson memorize US state capitals) helped out with proofreading. The mountain in The Strasbourg Mountaineer refers to a low (frankly invisible) rise in the table-flat prairie that surrounds the town.

I was born in Regina and raised in suburban Toronto. The CS stands for Charles Scott. To friends and family I am Scott. Please refrain from asking why I don’t use Charles. It is a long story, involves a principled disagreement between my parents, and has caused all manner of headache vis-à-vis bureaucratic forms, passports, first name last, last name first, etc.

There is no connection, intended or inadvertent, with CS Lewis, a writer whose work I have shamefully never read.

I have also never read a word of Proust. It required six starts before I finished The English Patient. I have no desire to try Joyce. My heroes of fiction: Inman from Cold Mountain, Portia from The Merchant of Venice.

There are matters cultural that I do not understand but know I should: jazz music, opera (and its mystifying sister, ballet), poetry. But I have read Robert Service and Kipling, both of which I enjoy. I can also recite, almost line for line, Marriott Edgar’s Albert and the Lion, complete with fairly accurate Stanley Holloway inflection.

Regrettably, The Strasbourg Mountaineer no longer exists. Pierre is still the capital of South Dakota. The English Patient was, after all, a remarkable read. And I do not remember the style of WO Mitchell’s shoe. But it was likely sensible.