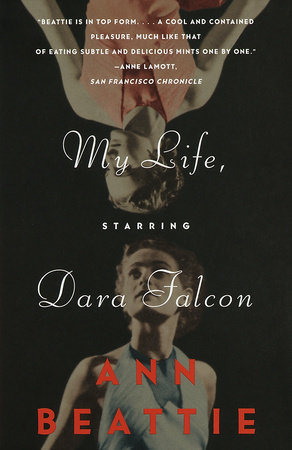 The questions, discussion topics, and author biography that follow are designed to enhance your group’s reading of Ann Beattie’s My Life, Starring Dara Falcon, a novel that explores the obsessive side of female friendship and traces the events that impel one woman out of the cocoon of her marriage and into independence, but also into a web of moral uncertainty and self-questioning.

Jean is a young woman whose parents died in a plane crash when she was six.  Raised by a timid aunt whose yearly gambling vacations wiped out Jean’s inheritance–the money paid to victims’ families by the airline–Jean meets Bob Warner in college and drops out when she marries him in her sophomore year, only too pleased to settle into a routine domesticity in Bob’s hometown.  She spends her time running errands and tending to the needs of Bob and his extended family.

But when Dara Falcon comes to town and befriends Jean, everything begins to change.  Dara is beautiful, witty, sophisticated; she brings a jolt of extravagance and mystery to the sleepylittle town of Dell, New Hampshire.  An actress with a  questionable past, she is a brilliant manipulator of people and their impressions of her.  Jean soon becomes obsessed with Dara, flattered by her friendship despite disturbing hints that Dara is untrustworthy.  Before long, Dara is wearing Jean’s favorite alpaca jacket and has bought Jean’s car for a dollar, while Jean has left Bob and gone back to college to finish her degree.  And though eventually Jean begins to see that Dara is not everything one could desire in a friend, time spent with Dara goads Jean into a new self-awareness and a thorough questioning of what she wants in life.

1. Until meeting Dara, Jean has simply fallen into things rather than actively making choices in her life. Jean remembers her aunt telling her "over and over that my passivity would be a lifelong habit, and lifelong curse for everyone else" [p. 100]. Is Jean’s passivity a fixed feature of her character, or is it the result of her circumstances? Does the novel imply that Jean’s experience with Dara roused her from her habitual passivity, or not?

2. One of the first things we hear from Dara (regarding her relationship with Tom Van Sant) is that "it’s really pathetic to be liked by an orphan, just because the person’s so needy, and you happened to appear" [p. 60]. Considering that Jean is also an orphan–although Dara doesn’t know this yet–are you surprised that Jean doesn’t take this comment as a warning? Is the friendship that grows up between Dara and Jean a typical bond between young women in early adulthood? Jean worries that her response to Dara is quite adolescent: Is this so?

3. Why does Dara return to Dell? Is it an indication that she has failed in the competitive stakes of more sophisticated places? Is it necessary that Jean go elsewhere to make herself happier? Does the novel imply that there is something inherently limiting about small-town life?

4. The comical life story of Grace Aldridge, while seeming quite trivial at first, takes on a central importance in the novel. How does Beattie use Grace’s pedestrian narrative, My Life, as a structural and thematic element? What does it mean to tell the story of one’s own life? Why does Beattie call into question the truthfulness of what Grace, and Dara, tell others about themselves? Is Jean, too, an unreliable narrator as she tells her own story?

5. Liam tells Jean that the relationship between herself and Dara has an unexpressed sexual component. Is Dara in love with Jean, and vice versa? Is each woman merely using the other? Why doesn’t Jean write back to Dara upon hearing that she is going to be treated for cancer?

6. What is the significance of the ring Jean wears? What does the ring represent for her? Is she right to return it to Tom?

7. Summarizing her rueful look at Bob’s family, Jean says "They were all as much cases of arrested development as I was" [p. 178)]. What characteristics do the members of Bob’s family share? Does Jean fit in well with them, despite her desire not to? How does Bob come across in the novel? Are you relieved or sorry when she leaves him? Is there anyone in the novel who isn’t suffering from "arrested development"?

8. Discussing Grace Aldridge’s memoir, Dara makes one of the novel’s most intriguing statements: "Here we have the revelation that life is a game. Do we all feel that life is a game? Do we perhaps feel it, but also feel reluctant to say it, because life is supposed to be so serious?" [p. 103]. Is Dara being particularly honest and insightful at this moment? Does this explain her behavior?

10. John Updike has written that "Beattie’s power and influence . . . arise from her seemingly resistless immersion in the stoic bewilderment of a generation without a cause." How would you relate this insight to My Life, Starring Dara Falcon? Why has Beattie included mention of political aspects of life in the late 1970s, like the activism against the Seabrook nuclear power plant? Is the time period an integral part of the story?

11. Do a character’s physical surroundings and belongings shed any light on the meaning of "identity" in this novel? Do clothes, objects, and spaces express something important, or are they seen as temporary, random?

12. Dara plays the female lead in Ibsen’s classic play A Doll’s House, in which a wife slowly comes to reject her domestic life and her domineering husband. And even before Dara’s performance, Jean realizes that "she had called to my attention–without words, merely by her existence–an alternative to being enfolded into the sameness and increasing numbness of family life" [p. 107]. How important a role does feminism play in the changes that Jean makes for herself?

13. The novel begins and ends with Jean speaking from Key West, some twenty years after the events she relates. How does her present life compare to the one she left behind? Has she changed? How does the beginning of the novel influence the reader’s view of Dara?

14. Ann Beattie has said, "I don’t begin anything, story or novel, or even a letter to my parents, knowing what the plot will be. Like fingers hovering over the Ouija board, I find that I linger longer over some characters than I’d have thought, because of a kind of electrical charge they possess; I find, time and time again, that what seemed a digression I decided to follow . . . resolves itself by becoming an important element of the plot I could never have anticipated." How does this description of Beattie’s creative process relate to Jean’s story, which threatens to be engulfed by the presence of Dara? Is it an apt description of the way peoples’ lives take shape in reality?

15. In two of the genre’s most classic examples–Charlotte Bronte’s Jane Eyre and Charles Dickens’s Great Expectations–the drama of coming to self-knowledge and learning one’s place in the world is heightened by the fact that the protagonist is an orphan. If you have read these novels, how would you compare Jean Warner to Jane and Pip as an analyst of her own life? How would you judge the choices she makes? Does Jean’s naiveté give way to something like wisdom or maturity?

Born in 1947, Ann Beattie grew up in the suburbs of Washington, D.C., attended college at American University, and went on to do graduate work in English literature at the University of Connecticut.  She began writing stories out of frustration with her doctoral work.  After rejecting twenty-two submissions, The New Yorker published Beattie’s "A Platonic Relationship" in 1974, and Beattie became a regular contributor to the magazine.  Her first collection of stories, Distortions, and her first novel,  Chilly Scenes of Winter, appeared simultaneously in 1976 and initiated a long-standing critical debate as to whether Beattie’s greater strength is in the story or the novel.  All critics agree, however, on the uniqueness of her style and her uncanny ability to expose certain truths about contemporary life, particularly as it lived by those of her own generation and social class.  She lives in Maine and Key West with her husband, the painter Lincoln Perry.  Her latest collection, Park City:  New and Selected Stories was published by Knopf in June 1998.
Learn More About My Life, Starring Dara Falcon
print

A Single Thread
Tracy Chevalier
Back to Top