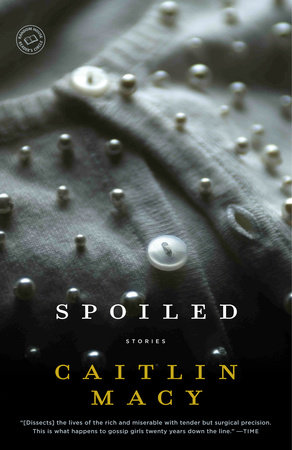 2. In “The Secret Vote,” a young woman raised Roman Catholic reacts with distaste to the idea of a gay couple having a child with a surrogate mother. But the story ends with the young woman herself having an abortion. What is Macy saying about the woman’s perspective? Is it hypocritical?

3. Unlike the United Kingdom, America isn’t supposed to have true class distinctions, yet these nuances play an important role in Spoiled. Why do you think that is?

4. Are there moral lessons that can be taken from the ways the women in these stories behave? Do you think these stories are meant to be cautionary tales?

5. The women in most of these stories are well-off, some of them very well-off. Why do you think they aren’t happier?

6. The subjects of several of the stories (“Annabel’s Mother,” “Bad Ghost,” “Spoiled,” “Bait and Switch”) are parents and their children, or parental stand-ins—nannies, friends’ mothers, a girl’s riding instructor—and their charges. Do you think a spoiled child makes for a spoiled adult?

7. This book came out in the middle of a global financial meltdown. How do you think the characters would be doing in today’s financial climate?

8. What does it mean to be spoiled?

The Book of Guys
Garrison Keillor

The Bay of Angels
Anita Brookner

The Short History of a Prince
Jane Hamilton

My Home Is Far Away
Dawn Powell

Day out of Days
Sam Shepard

Broccoli and Other Tales of Food and Love
Lara Vapnyar