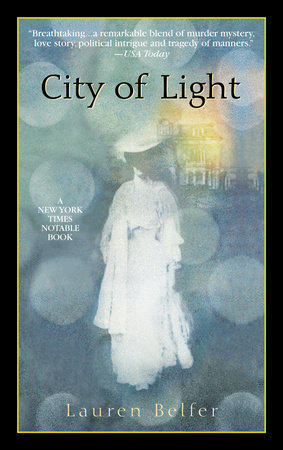 The year is 1901. Buffalo, New York, stands at the center of the nation’s attention as a place of immense wealth and sophistication, and its booming industry and newly electrified streets promise to bring the “city of light” even more repute.

Against this rich historical backdrop lives Louisa Barrett, the attractive, articulate headmistress of Buffalo’s most prestigious school for girls. Protected by its powerful all-male board, “Miss Barrett” is treated as an equal by the men who control the life of the city. Lulled by her unique relationship with these titans of business, Louisa feels secure in her position—until a mysterious death at the power plant triggers a sequence of events that force her to return to a past she has struggled to conceal, and to question everything and everyone she holds dear.

Wrought with remarkable depth and intelligence, this extraordinary novel evokes the culture and conflicts of a time and place with a storytelling power that is unrivaled. The questions, discussion topics, and author biography that follow are intended to enhance your group’s reading of City of Light by Lauren Belfer. We hope they will enrich your experience of this deeply fascinating novel.

Critical raves for the phenomenal debut City of Light by Lauren Belfer:

"A huge, sprawling portrait of the United States at the turn of the century, illuminated by a dazzling image of light and progress, and harboring a sly secret."
— The New York Times Book Review

"Arguably the most noteworthy historical novel since Ragtime."
— Playboy

"Has something for everybody — it’s a thriller, it’s a romance, it’s a well-researched historical novel."
— Miami Herald

"Get your hands on City of Light … A full-to-the-brim first novel [that] guarantees a straight-through, sleepless read."
— Time

"Belfer delivers a work of depth and polish … and a central character whose voice is irresistible to the last page."
–– Publishers Weekly (starred review)

"Like Niagara Falls itself, it’s breathtaking in its achievement."
—USA Today

"Written with the repressed subtlety and indirection of a Henry James novel … Belfer does a wonderful job of evoking the era, its manners and codes, its sense of the beauty of progress and technology."
–– San Antonio Express-News

"Masterful … Beautifully written, a book that elegantly combines history with page-turning suspense … City of Light stands comparisons with the smart historical fiction of … E.L. Doctorow and T.C. Boyle. And its mystery will grab readers the way … The Alienist did."
— Milwaukee Journal Sentinel

"[A] panoramic, exquisite rendering of the nation on the cusp of modernity."
— Orlando Sentinel

1. In City of Light, the upper echelons of Buffalo society all get what they want by cultivating an "acceptable" image under which they can do what they want, regardless of its moral implications. How does this rationalize their behavior, as well as hide it?


2. Faced with a social order that demanded this "acceptable" behavior, was there any other way Louisa could react when faced with a crisis — such as Millicent’s abduction or the vandalization of her school?


3. Are there any main characters in this story who don’t follow society’s code? Who and why?


4. Louisa likes to think of her students as "a generation of subversives who took up their expected positions in society and then, day by day, bit by bit, fostered a revolution." Do you think that this is what she achieved with her students? Was it the best way she had to help the social progress of women?


5. Why do none of the members of Buffalo society become involved with the faction that is worried about the affects of the power plant on the environment?


6. In protecting Grace, was Louisa doing the right thing? Did her focus on the little girl blind her, impairing her judgement, as with her decision to not turn Susannah Riley in?


8. If Abigail’s mother wanted to keep her daughter’s child far away from Abigail and from scandal, why didn’t she have him adopted in a family far away, instead of sending it to the asylum?


9. Why does Mr. Rumsey let Louisa know that he planned her meeting with Cleveland? Would she have been better off never knowing?


10. Why does Mr. Rumsey seem surprised that Louisa might have suffered from her experience of conceiving Grace — or that she feels badly about her "loss of innocence?"


11. In 1901, Buffalo is one of the richest, most sophisticated cities in the nation. How does this influence Louisa’s life, and the lives of the wealthy citizens of the city? What do they hope to achieve on the brink of a new century?

What motivates Tom Sinclair’s dreams of electrical power? Is it the vision of industrial progress, the hope of personal fame and wealth, or something else?

Why was Francesca Coatsworth able to maintain her "alternative" lifestyle and still be such an influential member of society?

Why do you think Francesca allowed Sarah to disappear into Singapore after she confessed her crimes?

Lauren Belfer grew up in Buffalo, New York. She received her M.F.A. in fiction from Columbia University in New York City, where she now lives with her husband and son. City of Light is her first novel.


From the Paperback edition.
Learn More About City of Light
print

Fortune Is a Woman
Elizabeth Adler

The Pursuit of Pearls
Jane Thynne

At Some Disputed Barricade
Anne Perry

The Many Deaths of the Firefly Brothers
Thomas Mullen

Angels in the Gloom
Anne Perry

We Shall Not Sleep
Anne Perry

The Night Villa
Carol Goodman
Back to Top