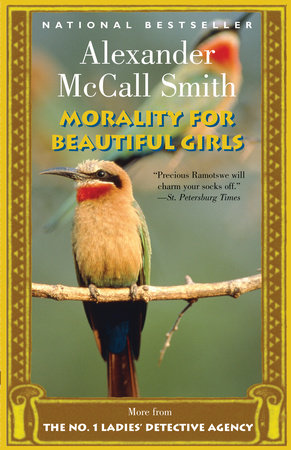 The introduction, discussion questions, author biography, and suggestions for further reading that follow are designed to enhance your group’s discussion of Alexander McCall Smith’s Morality for Beautiful Girls, the third installment in the acclaimed Precious Ramotswe series.

At the end of Tears for the Giraffe, the previous novel in the series, Precious Ramotswe is engaged to Mr J.L.B. Matekoni, the No 1. Ladies’ Detective Agency is firmly established, and all seems to be well. But now, as Morality for Beautiful Girls begins, Mr J.L.B. Matekoni, the hard-working, generous-hearted mechanic and owner of Tlokweng Road Speedy Motors, is behaving strangely. He is uninterested where once he was enthusiastic, full of self-reproach where once he was confident. In short, he is depressed, so much so that he cannot continue to run his business. To make matters worse, the detective agency, despite its success and high reputation, is losing money. Mma Ramotswe’s assistant Mma Makutsi is eager for a promotion, and there are now two orphan children whom Mma Ramotswe and Mr J.L.B. Matekoni must raise.

Drastic measures are called for: a merger and major reorganization. The No. 1 Ladies’ Detective Agency closes its offices, moves into a small building adjoining the garage, and Mma Makutsi serves as acting manager of Tlokweng Road Speedy Motors, as well as assistant detective, while Mr J.L.B. Matekoni is resting. And in truth the two businesses are not so different. People bring their cars in to have the mystery of their malfunction solved much in the same way people bring in their personal problems to have the detectives diagnose and fix them.

A Government Man, convinced his new sister-in-law is out to kill his younger brother, enlists Mma Ramotswe’s services, and while she is working on that case, the director of a beauty pageant asks Mma Makutsi to help him find one “good girl” who will not bring disgrace to the pageant and to Botswana, (no small task, as it turns out). As always with the Precious Ramotswe novels, however, the story of how people live—how they treat each other, how deeply they empathize with others, and how well they respect the customs and morality of Africa—is the real story. And with the ever-engaging Mma Ramotswe at the center of the novel, observing, commenting on, and indeed influencing the world around her, this story comes vibrantly and unforgettably to life.

1. The values of courtesy, respect, and politeness—proper forms of greeting and speech, in particular—are stressed throughout the Precious Ramotswe novels. Which characters in Morality for Beautiful Girls adhere to these traditional courtesies? Which characters violate them? What are the moral implications of upholding or ignoring such traditions?

2. How surprising is it that Mr J.L.B. Matekoni suffers from depression in Morality for Beautiful Girls? What might be the causes of that depression? What seems to bring him out of it?

3. Clovis Anderson, author of The Principles of Private Detection, writes that there is “very little drama” in being a detective and that “those who are looking for romance should lay down this manual . . . and do something else” [p. 59]. Most detective novels do, however, rely on adventure and “drama” to sustain their readers’ interest. What makes the Precious Ramotswe novels so engaging even in the absence of such drama?

4. In considering a friend who treated her maid badly, Mma Ramotswe thinks that “such behaviour was no more than ignorance; an inability to understand the hopes and aspirations of others. That understanding . . . was the beginning of all morality. If you knew how a person was feeling, if you could imagine yourself in her position, then surely it would be impossible to inflict further pain. Inflicting pain in such circumstances would be like hurting oneself” [p. 77]. Which characters in the novel demonstrate this ability to empathize with others? Which characters fail to do so? Why, ultimately, is this kind of compassion so important?

5. Clovis Anderson also warns against making “prior assumptions” and deciding “in advance what’s what and who’s who” [p. 125]. In what instance does Mma Ramotswe make this mistake? Where else in the novel do assumptions turn out to be false? In what ways are being a reader and being a detective similar, in terms of this matter of making assumptions?

6. How is Mma Makutsi able to transform Mr J.L.B. Matekoni’s lazy, irresponsible apprentices into hard-working mechanics? What qualities of character does she display in her management of Tlokweng Road Speedy Motors? Why do these boys respond to her so well?

7. Early in the novel, Mma Makutsi relates an article she has read about the anthropologist, Richard Leaky, which shows that the human species originated in East Africa. Mma Ramotswe asks, “so we are all brothers and sisters, in a sense?” To which Mma Makutsi replies, “We are. . . . We are all the same people. Eskimos, Russians, Nigerians. They are the same as us. Same blood. Same DNA” [p. 12]. What are the implications, for the moral questions that the novel raises, of this statement? What does it suggest about distinctions based on race?

8. In trying to find a morally suitable girl to win the beauty contest, Mma Makutsi believes, “the difficulty was that good girls were unlikely to enter a beauty competition in the first place. It was, in general, not the sort of thing that good girls thought of doing” [p. 204]. What does this passage suggest about the relationship between beauty and morality, or between appearance and essence? Is Mma Makutsi right about all this?

9. The later chapters of Morality for Beautiful Girls alternate between Mma Ramotswe and Mma Makutsi and their respective investigations. What does this parallel narrative structure add to the novel?

10. What enables Mma Ramotswe to discover what is really happening with the Government Man’s brother and his farm? In what ways do her intelligence, intuition, experience, and keen observation serve her in arriving at the truth of the situation?

11. The plot of Morality for Beautiful Girls revolves not around the unraveling of a crime, or the intent to commit a crime, but around discovering the absence of such intent. In most detective novels, this outcome would be a disappointment, at the very least. Why is it a satisfying and appropriate ending for this story?

12. One reviewer observed that “for all their apparent simplicity, the Precious Ramotswe books are highly sophisticated” [The Spectator]. In what ways do these books appear simple? What accounts for their underlying sophistication? What do they teach us about ourselves?

Alexander McCall Smith is a professor of medical law at Edinburgh University. He was born in what is now known as Zimbabwe and taught law at the University of Botswana. He is the author of over fifty books on a wide range of subjects, including specialist titles such as Forensic Aspects of Sleep and The Criminal Law of Botswana, children’s books such as The Perfect Hamburger, and a collection of stories called Portuguese Irregular Verbs.
Learn More About Morality for Beautiful Girls
print

In the Company of Cheerful Ladies

The Good Husband of Zebra Drive

The Right Attitude to Rain
Back to Top