The War Between the Classes Teacher’s Guide 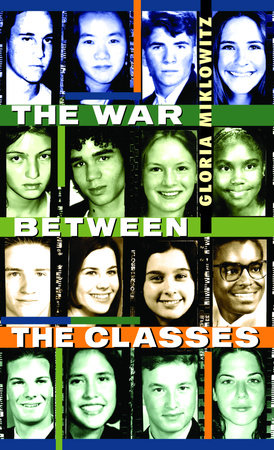 The War Between the Classes Teacher’s Guide

pdf
The War Between the Classes Teacher’s Guide

When Mr. Otero plays the Color Game in class with his seniors, prejudice and stereotypes are openly addressed, but some of his students think the game goes way beyond fair in order to equalize the racial and social playing field.

Living in a middle class neighborhood in a modest home, Amy is a first-generation Japanese girl raised with traditional views on respect and family. Living in the richest part of town in a huge home, Adam is wealthy and white and raised with privilege and arrogance. When they start dating, their friends, who are from different social circles and racial backgrounds, are not comfortable with their relationship. Both sets of parents also want their children to date within their race and social standing. Adam and Amy fight an age-old battle.

Mr. Otero’s Color Game is an experiment that’s designed to make students aware of class and racial prejudices. When Adam and Amy sign up for the class, they are hoping to be in the same color group, but that is not what happens. The game is rigged so that the rich, white students like Adam are chosen for the lowest social order, and the poorer, ethnic students like Amy are the upper class. The game tests Adam and Amy’s relationship, and allows all of the students to experience how the other half live. This demonstrates to the entire school that racial and social prejudice exists, and more importantly, that change can occur.

Gloria D. Miklowitz has written more than 60 fiction and nonfiction books for children and young adults. Her books have won many awards and deal with important issues such as nuclear war, racial injustice, steroid abuse, date violence, and the militia involvement. When she was asked what she liked best about being a writer, she replied, “I love creating different lives and living in them for awhile.” Ms. Miklowitz finds many of her ideas from articles in the Los Angeles Times, and it is important to her to write about ideas and issues that mean something to teens.

Ms. Miklowitz has two grown sons who are college professors and a granddaughter who is following in her grandmother’s steps by being a writer. Ms. Miklowitz currently lives in La Cañada, California.

Discuss with students the difference between racism, prejudice, and discrimination. Racism is the belief that race accounts for the differences in human character; prejudice is a negative judgment based on insufficient or unexamined evidence; and discrimination is treatment received based on class membership rather than individual merit. Discuss with students how these ideas affect the current stereotypes they hold about particular ethnic groups and races.

Family–Although Amy and Adam’s families have similar prejudices against other races, their families differ greatly in the values they hold, the way they show respect for authority, and the amount of time the parents spend with their children. Discuss the importance parents play in forming the attitudes and opinions of their children. Ask students ways they could disagree with their parents respectfully in order to change their parents’ ideas about sensitive issues. Discuss the differences in the way Adam and Amy choose to disagree with their parents.

Racism–Racism is evident in Adam and Amy’s parents, but neither of them holds their parents’ views. Adam says to Amy, “Parents! Sometimes I wonder how either of us could have escaped all their prejudices.” (p. 16) On the other hand, Juan’s mother did not show racism, but Juan did. How can you justify or explain this? What would you assume about Justin and Carol’s parents based on their actions and attitudes toward others? Discuss the different factors that contribute to a person’s values and belief system.

Prejudice–As a result of Mr. Otero’s Color Game, students are forced to look at ways they prejudge others. Sometimes in high schools this prejudging does not result in racism, but results in other social cliques based on criteria such as clothing, athletic participation, cheerleading, and grades. Brainstorm with your students other ways prejudice is shown in their school or community. Discuss how prejudice contributes to school violence and recent hate crimes that have been in the news.

Respect–Amy and Adam disagree over the way to handle Amy’s father and his strictness with Amy. Read the exchange about respect between Amy and Adam on page 16, and then discuss both viewpoints with your students. Ask students to give other examples from the book when respect is either given or not given. Then ask them to share personal experiences with the class.

Discrimination–Most of the characters in the novel are discriminated against in one way or the other, yet each of them show discrimination to others. How could you apply the Golden Rule, “Do unto others as you would have them do unto you,” to this situation? Discuss how Amy applies the Golden Rule to the Color Game and the impact her actions have on the game and the other players.

Social Studies–Amy makes a reference to the treatment of Japanese Americans during World War II and the fact that it was her father’s poison. (p. 78) Divide the class into pairs and have each pair investigate an aspect of the internment camps in the United States for Japanese Americans during World War II. Students can research the following: Where were they located? Why were they established? How were the Japanese Americans treated? What happened to their businesses and property while they were imprisoned? What was the overall effect? Have the pairs report their findings to the class.
Have students research the internment camps for Italian Americans in the aftermath of the bombing on Pearl Harbor. Lead a class discussion on this lesser-known part of history.

Geography–The ethnic and social class makeup of any community has an effect on the population as a whole. Brainstorm with your class the areas that would be influenced, such as the types of restaurants, school curriculums, food stocked in grocery stores, language on posted signs, and the types of stores open for business. Ask students to find their city’s demographic profile from the latest census to determine the ethnic makeup of their community and illustrate their findings on a bar graph. Do the census figures support the areas of influence they determined for their community?

Language Arts–Ask your students to look up the word respect in the dictionary and write down all of the definitions listed. Then have students find examples in the book that show each type of respect. For example, one definition is “to feel or show deferential regards for; esteem,” and this is portrayed when Amy tells her dad, “Adam respects me.” After students have found several examples, ask them to relate a personal experience of at least two of the definitions they gave.

After the Color Game was completed, Mr. Otero spoke with his students about the way the game affected them and the possible long-term ramifications it could have on their lives. He says, “remember the feelings you had these past weeks of associating people’s character with their band color. That’s what’s called stereotyping. You found yourselves looking at a person’s band first, then you knew how to interact with that person.” (p. 155) Ask students to examine the relationships they have with people of different social classes and races and determine if their actions are based on stereotypes. Ask students to write a paper stating how they came to have the stereotypes, and how they can change their actions to eliminate the stereotypes.

Imagery in writing allows the reader to see and feel what the characters see and feel, and all good authors use imagery to convey situations and emotions. For example, on page 2, Amy says, “My parents had a way of making strangers feel uncomfortable, closing the shutters behind their eyes.” On page 7, Amy describes how she dances the hula for Adam, “swaying my hips in languid movements while my hands and fingers spoke of raindrops falling and wind blowing ripples on the sea.” Ask your students to look for other examples of word pictures and draw the pictures Miklowitz paints with imagery.

“101 Ways to Combat Prejudice”
A pamphlet published by Barnes & Noble and the Anti-Defamation League that can be downloaded.
www.adl.org/prejudice/default.asp