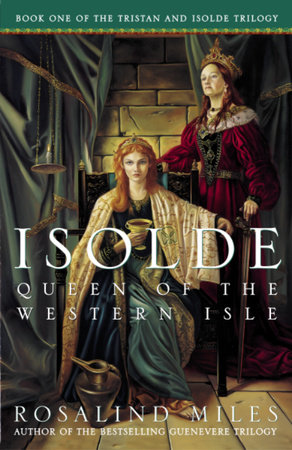 Tristan and Isolde, star-crossed lovers in the time of King Arthur, have been celebrated in poems and legends throughout the ages. Now, gifted storyteller Rosalind Miles—bestselling author of the stunning Guenevere trilogy—sets the fated duo in a dynamic, freshly imagined epic of conquest, betrayal, and desire. The first volume of a new trilogy, this lavish retelling infuses the well-loved Tristan and Isolde story with intimate details and heartstopping political intrigue—and introduces us to the intoxicating Isolde, as we’ve never seen her before, healer and princess, torn between an earth-shattering love and her obligation to a queenly lineage. This guide is designed to help direct your reading group’s discussion of Rosalind Miles’s breathtaking Isolde, Queen of the Western Isle.

In the golden time of Arthur and Guenevere, the Island of the West shines like an emerald in the sea, one of the last strongholds of Goddess worship and Mother-right in the British Isles. Isolde, renowned for her beauty and her gift in the healing arts, stands to inherit the throne of Ireland from her tempestuous mother. But when a mysterious visitor arrives on the island seeking help for a deadly wound, Isolde’s world turns upside down and her fate shifts in a new direction. The stranger is Tristan, heir to the Cornish throne and Ireland’s enemy thanks to the reckless war waging between the two nations. As the world around them spirals into mayhem and Isolde is forced into a political marriage to Tristan’s uncle, the King of Cornwall, Tristan and Isolde are drawn inextricably together by a powerful love that must remain hidden or destroy them both.

Meanwhile, Isolde enters the world of international statecraft determined to bring peace to both Ireland and Cornwall and to defend the ways of the Goddess from hostile new elements. But she is an inexperienced queen and danger lurks around every corner of her new home. An ambitious Christian priest infiltrates the Cornish court, plotting the demise of the ancient, hallowed ways of life; Tristan’s cousin Andred connives to overtake the Cornish throne; the King’s mistress conspires to ruin Isolde by revealing her affair with Tristan; and the Queen of Ireland continues to put the sacred island’s future in jeopardy with her irrational behavior. Only the guidance of the Lady of the Sea and the intervention of the mischievous, shape-shifting Merlin will enable both Isolde and Tristan to survive the cross-currents of fate.

1. Merlin is a mysterious character throughout the novel, orchestrating key events in everyone’s lives and often saving the day with his otherworldly powers—yet he’s sometimes hampered by the limitations of his magic. When do you see his powers failing him? In what ways does he directly or indirectly affect Isolde and Tristan? Who is the "broken bird" in his vision at the end of chapter one? Why do you think Merlin is cruel to Guenevere and unwilling to help in the issue of Arthur’s paternity?

2. We first encounter Isolde as she seeks Sir Gilhan’s counsel about the state of international affairs. She struggles to comprehend that her beloved Ireland has enemies, and that leading a war may be among her future responsibilities. How has Isolde’s understanding of statecraft evolved by the end of the novel? Do you think it’s significant that Miles reveals Isolde as a political character first, and a romantic one later? Does this order change by the end?

3. At the root of the rocky political situation between Ireland and Cornwall lies the reckless, fickle Irish Queen. Is she truly power-hungry, or is she just wildly impressionable? When do we see her invoking the Old Ways to justify her behavior, and when do we see her betraying those same Old Ways? What do you think she really wants from Isolde?

4. When do we see Isolde experiencing the Sight? Which other characters have it? What kind of information does Miles convey with these visions?

5. When the Queen secures the love potion intended to bind Isolde to Mark, we read, "And overhead all the demons of death and destruction came to life and danced with delight at the feast of evil ahead." Then as Andred plots to expose Tristan and Isolde, we read, "All the spirits of evil awoke in their slimy lairs, yawned, stretched, laughed, and prepared to act." How do these reminders of unseen, dark forces at work affect your reading of Isolde and Tristan’s affair? Is their love powerful enough to withstand such deadly forces, or is the couple destined to be ruined by them in the end?

6. What does the Lady of the Sea mean when she tells Isolde that the Hallows of the Sea are her "fate" and her "task"? How do you interpret her command to Isolde: "Watch the bubble rising in the foam. When it breaks, follow its path to the sea"?

7. How does Isolde manage to remain perfectly honest with Mark, even when Andred publicly accuses her of improper conduct with Tristan? Does Tristan manage the same degree of honesty with Isolde when he’s recuperating in Ireland and attempting to explain who he is?

8. Throughout the novel, we see Isolde being incredibly gracious in trying situations—whispering encouragement and forgiveness to the guard who binds her hands for the ordeal by water; sending Palomides off with blessings and kindness despite his attempts to manipulate her; maintaining a loving devotion to her outrageous mother; etc. Does Isolde have any shortcomings? Is there anyone she cannot forgive?

9. Jerome’s take on Christianity offers a stark counterpoint to Dominian’s crush-and-conquer approach. What is the function of their brief conversation in relation to the rest of the novel? Is Isolde fully aware that Dominian’s agenda involves full-scale destruction of the Mother-right?

10. When Tristan first presents himself at Mark’s court, he enters a chamber that the narrator describes as "dank with fear," its occupants too desperate, resentful, nervous, and ashamed to even touch the food. Yet Tristan walks in and sees sunlight "pouring through the windows," a "rosy fire on the hearth," "rich furnishings," and "tables laden with welcoming food and wine." How does this glimpse into Tristan’s mind color your reading of his character? Is he utterly naive, or just a cockeyed optimist? In either case, does this trait damage him at any point in the story? What is his first hint that Mark may not be all he had hoped for in a kinsman?

11. Does the Lienore episode serve as mere comic relief in the novel, or do we learn something vital about Tristan, Arthur, and/or the rules of chivalry through it?

12. The love cordial that the Queen obtains for Isolde is presented as a perversion: "When the power of nature was harnessed to pervert true love, the very voice of nature would protest. The Nain had indeed torn the elements apart as she made them release their secrets in her quest to counterfeit true desire." But since Isolde and Tristan share a real love and desire already, what affect does the potion have on them? Does their love transform the unnatural intent of the elixirs? Do you think their love would survive without the supernatural boost of the potion?

13. After the ordeal by water, Mark makes a show of recognizing his own weakness, admitting his wrongs, and repairing his relationships with both Isolde and Tristan. Do you believe him? Does the episode herald any change for Andred? For Dominian?

14. Do you think Brangwain purposely leaves the potion lying around for Tristan and Isolde to find?

Rosalind Miles, Ph.D., is the author of sixteen books, including the bestselling Guenevere trilogy and the pop feminist classic, Who Cooked the Last Supper? Dr. Miles holds degrees from Cambridge University and the Universities of Leicester and Birmingham, and is a sought-after lecturer, essayist,and broadcaster. She lives in Kent, England, and Los Angeles, California.


From the Hardcover edition.
Learn More About Isolde, Queen of the Western Isle
print

The Maid of the White Hands

The Lady of the Sea

Guenevere, Queen of the Summer Country

Lady of the Light

A Time for Love
Back to Top