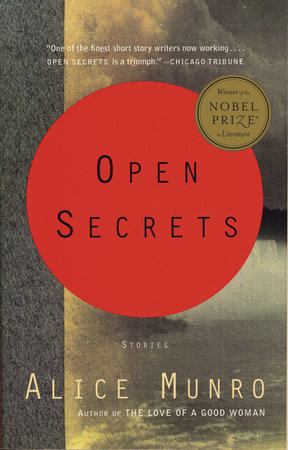 The questions, discussion topics, and author biography that follow are intended to enhance your group’s reading of Alice Munro’s Open Secrets. Alice Munro is an acknowledged master of the short story, and her newest collection has garnered the very highest praise. Most of the eight stories in Open Secrets take place in Munro’s native Canada and particularly in the small Ontario town of Carstairs. Munro’s exploration of her characters’ varied lives reveals entire worlds of passion, joy, despair–even exoticism and adventure–beneath exteriors that are often deceptively mundane.

The central characters in the stories are all women: an emotionally adventurous librarian; a young woman kidnapped by Albanian tribesmen in the 1920s; a farmer’s wife who yearns for gentility; a young born-again Christian whose unresolved feelings of love and anger cause her to vandalize a house; a spurned middle-aged woman who follows the man who rejected her to Australia and spies on him; a young frontier wife in the wilderness with her abusive husband. Munro explores female themes with great depth and power, but the range of her vision is not exclusively female: through the eyes of her fictional women she examines the culture and values of her world while weaving complex, luminous, and poetic apprehensions of the milieu she has made so intensely her own.

1. Topics for discussion of each story

What techniques does Munro use in this story to evoke the sense of time passing? What does the difference in character between Arthur Doud and his father say about the differing mores of the periods they live in?

2. What does Louisa’s taste in reading say about her character? What about Jack Agnew? And Arthur Doud? How do books, and the act of reading, help to shape the story?

3. What is the best way to describe Louisa’s one and only meeting with Jack? As a vision? A dream? A privileged look into an alternate life, a life that might have been? Which of the Agnews’ lives–the one in which they lost Jack or the one described by Louisa’s vision–is the more "real" to Louisa? Why do you think Jack–or Jack as imagined by Louisa–says "Love never dies"? What is Louisa’s understanding of "a normal life"?

1. What does marriage mean to Millicent, and in what ways does her idealized image of it differ from her own experience? Why does she become so personally concerned in Dorrie’s marriage? Why is she so determined that Dorrie will go through with the wedding?

2. Why does Millicent believe that she has sent Dorrie away at "greater cost" to herself "than she had understood" [p. 77]?

3. What do the situations of the story’s three women–Millicent, Dorrie, and Muriel–say about the importance of marriage in that culture at that time? Have Dorrie and Muriel had better lives than they would have had they remained single? What about Millicent? To these characters, is love an indispensable part of marriage? Can you deduce Munro’s own feelings about the importance of marriage as a social institution, and the role love plays within it, from this story?

1. What does Munro accomplish with this story’s unconventional method of narration? Does she use it to enhance the sense of reality, to evoke a dreamlike quality, to create a mystery? Is it possible to relate Lottar’s journey, and her sexual awakening, to Claire’s?

2. Lottar wonders: "Wouldn’t we rather have a destiny to submit to…, anything, instead of such flimsy choices, arbitrary days?" [p. 127] Does she imply that the traditional customs of the Ghegs, which provide us with a socially sanctioned destiny, are preferable to the arbitrariness of life in modern Canada? Or does the question have a wider, less specific meaning?

3. Munro leaves us in some doubt as to whether Charlotte is inventing the story of Lottar or telling about her own experiences. What is the purpose of such ambiguity? Do you yourself believe that Charlotte is telling the truth?

4. Why does Munro choose "The Albanian Virgin" as the title for this story? How is the status of women among the Ghegs made to reflect on the lives of women back in Canada? Why do so few of the Gheg women decide to become "Virgins"?

1. "Open Secrets" is in one sense a mystery story. Is it solved for us at the end? Does Munro mean to imply that Lawyer Stephens has killed Heather Bell? That Theo Slater did? What about Mr. Siddicup?

2. How does Maureen find the strength to cope with her husband’s brutish sexual appetites? Why does she submit to him?

3. The story builds to the final sentence, in which Maureen "seems to be looking into an open secret, something not startling until you think of trying to tell it" [p. 160]. What is the secret referred to here–a concrete fact or, less specifically, an abstract truth about a life?

1. How does Gail really feel about age and infertility? What hints does Munro drop to show us that these subjects are on her mind?

2. How does Munro convey the feeling of obsessive love through her character Gail? How would you describe Gail–is she pathetic? Brave? Dreadful? Heroic? Do you find the story primarily funny, disturbing, or both?

1. "It must be acknowledged," writes Mr. James Mullen, "that this is truly a hard country for women" [p. 206]. In what way is this a story of personal survival? Does life in the modern world continue to be in some way "hard" for women? How does the life of the woman who narrates the last part of the story reflect upon that of Annie?

1. Do you find that this story can be seen as a comment on social class, and on the beginnings of the breakdown of the traditional class structure? How do the social classes mix, and what barriers exist between the different layers of society? What is the traditional relationship between the sexes, as demonstrated in the opening scene at Monk’s? How does that balance come to change?

2. What can you deduce about the relationship between Billy and Wayne? Rhea tells Wayne that he doesn’t like Billy. Do you believe that to be true? How is Rhea able to deduce Wayne’s feelings for her from their momentary encounter behind Monk’s?

1. Liza’s love for Bea is "one of expectation" [p. 287]; she is "the woman who could rescue them–who could make them all, keep them all, good" [p. 293]. What does Liza mean by "good," or can she even define it to herself? Is it just Ladner she wants controlled, or herself as well? How can you explain her decision to join a fundamentalist church? How can you explain her marriage to a man of Warren’s character?

2. Bea feels that "some women, women like herself, might be always on the lookout for an insanity that could contain them" [p. 268]. Is this what she has found in her relationship with Ladner? Does Munro imply that Ladner’s particular insanity is more than Bea can cope with? Does Bea acknowledge its full extent, or does she deceive herself?

Topics for discussion of Open Secrets

1. "When you live in a small town you hear more things, about all sorts of people," Munro has said. "In a city you mainly hear stories about your own sort of people." What does Munro tell the reader, throughout these stories, about the inhabitants of Carstairs, their lives, their expectations and possibilities, their interactions and social life, their values?

2. How do the various women in these stories respond to sex and motherhood? Can these women, different as they are, be said to hold certain characteristics in common? Why do so many of the women, particularly those of the older generation, find sex to be unpleasant, while still considering marriage their goal?

3. Munro has said that she has always been interested in "the way women circumvented the rules," and all of the women in these stories function within firm limits posed by convention, class, and gender. To what degree do such limits rule their lives? When Munro’s women take risks, do they tend to be rewarded for it?

4. How are realism and fantasy, the exotic and the mundane, balanced in Munro’s work? Which predominates? Can you find examples of moments when Munro’s stories depart from realism? What does Munro achieve with these moments?

5. Munro is constantly experimenting with different narrative techniques. Why does she choose to tell each story from its own particular, sometimes oblique point of view? Why do you think that Munro has decided to cover entire life spans in her stories, rather than using the "slice of life" technique that so many short story writers favor?

6. Most of the stories in this collection contain letters. What is Munro’s purpose in using letters so often? What particular importance do they have? How do the characters use letters to hide their real motives or to present alternative versions of themselves?

This Is Paradise
Kristiana Kahakauwila

Let Me Tell You
Shirley Jackson

When the Nines Roll Over
David Benioff
Back to Top