Fire in the Blood Reader’s Guide 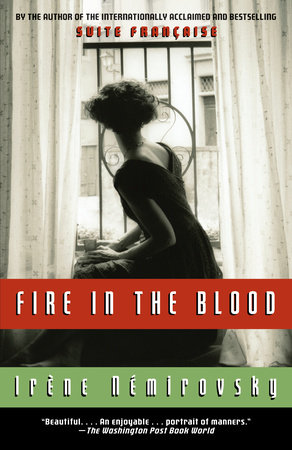 Fire in the Blood Reader’s Guide

“Beautiful. . . . An enjoyable . . . portrait of manners from the first half of the last century.”
—The Washington Post Book World

The introduction, questions, and suggestions for further reading that follow are designed to enhance your group’s discussion of Irène Némirovsky’s extraordinary novel, Fire in the Blood, written in 1941 and now available for the first time in its entirety.

Set in the idyllic French countryside just prior to World War II, Fire in the Blood is a classic love story, a tale of youth and age, passion and regret, truth and deception. It is also a novel about adultery-the great theme of nineteenth-century fiction-told with a subtle narrative mastery that even Tolstoy and Flaubert would have admired.

The novel is narrated by Silvio, a solitary old man looking back at his life, the passions of his youth, and the folly still being committed because of the madness of love. As a young man, Silvio fled the stifling confines of village life. He sought out adventure, selling cocoa in Congo, buying horses in Canada. Having squandered most of his inheritance, Silvio returned, nearly penniless. As the novel begins, he has no illusions about his situation: “I am old, poor and unmarried, holed up in a farmer’s hovel in the middle of the woods” [p. 3]. But he enjoys his peace and solitude, and from this vantage he can look on coldly as the “fire in the blood” that once consumed him draws Colette, the daughter of his friend Hélène, and the orphaned Brigitte into its flame.

Silvio paints an idyllic picture of Hélène’s marriage to François, a companionable union free of strife and filled with deep affection. But when Colette marries the unremarkable and naïve Jean, the peace that Silvio values so highly, in himself and others, begins to unravel. Colette begins a passionate affair with the handsome Marc. Brigitte, married to Declos, a bitter man many years her senior, also begins an affair with Marc. And when Jean is drowned mysteriously in a river he has crossed every day for years, the truth of his death is covered up by the villagers who, as Silvio says, would rather “walk through fire than get involved in other people’s business” [p. 74]. But these secret entanglements are only the tip the iceberg. Silvio gradually reveals his own youthful adultery, its connection to the current romantic dramas being played out, and the flame of passion that still burns within him.

A novel about the most powerful of human passions and their often disastrous consequences, Fire in the Blood paints a vivid picture of village life in prewar France, a place where secrecy, jealousy, and ill will lie just under the placid surface.

1. Is Silvio a reliable narrator? Is he honest with himself? How does he change over the course of the novel?

2. Silvio writes: “I enjoy simple things, things within reach: a nice meal, some good wine, the secret, bitter pleasure of writing in this notebook; but, most especially, this divine solitude” [p. 52]. Why is writing in his notebook a “bitter pleasure”? Why does he value his solitude so highly?

3. In the same passage, Silvio says, “What else do I need? But when I was twenty, how I burned! How is this fire lit within us? It devours everything and then, in a few years, a few months, a few hours even, it burns itself out. Then you see how much damage has been done” [p. 52]. What does this “fire,” which Silvio mentions many times over the course of the novel, represent? What kinds of damage does it cause to the lives of the main characters in Fire in the Blood? How does it get “lit”?

4. Silvio refuses to help Colette tell her parents the truth about her husband’s death and tells her that, after she leaves, he’ll do what he does every night: “I’ll shut the gate. I’ll lock the doors. I’ll wind the clock. I’ll get my cards and play a few games of Solitaire. I’ll have a glass of wine. I won’t think about anything. I’ll go to bed. I won’t sleep much. Instead I’ll dream with my eyes open. I’ll see people and things from the past. As for you, well, you’ll go home, you’ll feel miserable, you’ll cry, you’ll get out Jean’s photograph and ask his forgiveness, you’ll regret the past, fear the future. I can’t say which of us will have a better night” [p. 86]. Which state of mind is, in fact, preferable? Does the novel seem to support one way of living-passionately or coldly-over the other?

5. What role does repetition play in the novel? In what ways do Brigitte and Colette both repeat the mistakes of their parents?

6. Silvio says that he’s lived long enough to know that there’s “no such thing as uncomplicated emotions” [p. 103]. Why does Silvio feel this way? What extremely complicated emotions-and complex emotional entanglements-does the novel explore?

7. Silvio tells Colette, “To you, Jean’s death is a horrific catastrophe. . . . He was a poor, jealous, clumsy lad who’s better off where he is. You blame yourself for his death? The way I see it, the only things to blame are chance or destiny” [p. 85]. Is Colette responsible for her husband’s death? What does Silvio mean by suggesting that only chance or destiny are to blame?

8. François tells Silvio: “These people are incredible. . . .They can watch a man being murdered before their very eyes and still not say a word to avoid ‘getting involved’”[p. 75]. Why do the farmers suppress what really happened in Jean’s death? What ethos governs how they view and treat their neighbors? Why are they so reluctant to get involved?

9. When a carful of Parisians stop in Moulin-Neuf to get their car repaired, Silvio remarks: “They’ll pass silent, sombre country estates and will not begin to imagine the dark, secret life within-a life they will never come to know” [p. 63]. What role do secrets play in the novel? What causes these secrets to come out?

10. Why doesn’t Silvio reveal his own past secret relationship with Hélène as he tells the story of Colette’s and Brigitte’s affairs? Why does he wait until Brigitte confronts Hélène and François?

11. Brigitte disputes François’s claim that she freely chose to marry Declos, a many forty years her senior. In what ways was hers not a free choice? What does the novel as a whole suggest about the position and relative power of women in rural French society in the years just prior to World War II?

12. The Preface to the French edition includes a journal entry in which Némirovsky outlines a novel idea: “Austerity, purity of parents who were guilty when they were young. The impossibility of understanding that ‘fire in the blood’” [p. 133]. In what ways does this brief sketch accurately describe the main themes of Fire in the Blood? Why would Némirovsky write a novel about something that is “impossible to understand”?

13. Near the end of the novel, Silvio engages in a long, slightly drunken monologue in which he finally speaks his mind about Hélène. Why doesn’t he actually say these things to her? Is he right in thinking that her happiness with François is only a pretense?

14. In many ways, Fire in the Blood describes a historical period and social milieu vastly different from contemporary America. What essential human emotions does the novel explore? In what ways does it illuminate issues that are still with us today?

Irène Némirovsky was born in Kiev in 1903 into a wealthy banking family and emigrated to France during the Russian Revolution. After attending the Sorbonne, she began to write and swiftly achieved success with an early novel, David Golder, which was followed by The Ball, Snow in Autumn, Dogs and Wolves, and The Courilof Affair, among others. She died in Auschwitz in 1942.