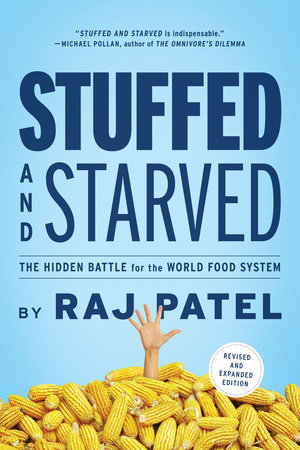 “For anyone attempting to make sense of the world food crisis, or understand the links between U.S. farm policy and the ability of the world’s poor to feed themselves, Stuffed and Starved is indispensable.” —Michael Pollan, author of The Omnivore’s Dilemma

One billion people in the world are mal-nourished and almost twice that are overweight. In this updated paperback, UC Berkeley professor Raj Patel explains that the problem is not that the global food system doesn’t make enough to feed everyone, it’s that the priorities of consolidation and profit prevent justice for farmers and quality food for consumers.

To find out how we got to this point and what we can do about it, Raj Patel launched a comprehensive investigation into the global food network. It took him from the colossal supermarkets of California to India’s wrecked paddy-fields and Africa’s bankrupt coffee farms, while along the way he ate genetically engineered soy beans and dodged flying objects in the protestor-packed streets of South Korea. What he found was shocking, from the false choices given us by supermarkets to a global epidemic of farmer suicides, and real reasons for famine in Asia and Africa.

Yet he also found great cause for hope. Patel explains, from seed to store to plate, the steps to regain control of the global food economy, stop the exploitation of both farmers and consumers, and rebalance global sustenance.

Raj Patel (rajpatel.org) is an author, journalist, and food policy expert who continuously challenges our presumptions about the global economy with his work both as a policy analyst and activist. Cuurently a visiting scholar at UC Berkeley’s Center for African Studies and a fellow at the Institute for Food and Development Policy, also known as Food First, Patel has worked for the World Bank and the World Trade Organization and protested against them around the wold.

In addition to numberous scholarly publications in economics, philosophy, politics and public health journals, he regularly writes for The Guardian and has contributed to the LA Times, NYTimes.com, The San Francisco Chronicle and The Observer. He is currently working on a documentary about the global food system with award-winning director Steve James. An engaging speaker, Patel rouses his audience through his highly pertinent discussions of globalization and the world’s food system.

Chapter 1: Introduction
1. Explain why the apparent choices that supermarkets present us with—whether it be varieties of apples, brands of cereal, or kinds of coffee—are not really our own. If the food we find there is not dictated by the consumer, the seasons, our locations or by the full range of foods, fruits, and vegetables available, explain how corporations the ones to be in control? (page 10)
2. When children grow up malnourished, they have a greater risk of obesity when they become adults because their bodies metabolize and store food poorly. Can you suggest some solutions for this problem? (page 12)
3. Why is it significant that we don’t know anything about the farmers who grow the crops for the foods we find at our supermarkets? What are some questions we could be asking if we want to be informed consumers? (page 16)
4. Explain how the laws of supply and demand work for coffee growers like Lawrence Seguya, a coffee-grower in Uganda. (page 17)
5. What does it mean when author Raj Patel says that “there’s a bottleneck in the [global food] distribution chain.” Examine the charts on page 21 (see below). Who is at the top? Who is at the bottom? How does the system work in terms of the concentration of power for the players involved?
6. What are some of the ways that farmers and consumers are fighting back? (page 23)

Chapter 2: A Rural Autopsy
1. Why are farmers in India, Sri Lanka, East Asia, Astralia, and other countries committing suicide? (page 29)
2. How are these terrible tragedies of the working poor and the struggles of women being written out of the story of poverty? (page 38)
3. According to Patel, what are some reasons why inequality might continue to be a major problem in India? (page 41)
4. Who was Lee Kyung Hae and how was he involved with the Koren producer’s movement? (page 43)
5. Why can’t farmers pay their debts? (page 47)

Chapter 3: You Have Become Mexican
1) How has NAFTA effected Mexican farmers? (page 56)
2) What does Patel mean by “creative destruction” and how does this notion affect the poor? (page 60)
3) How has NAFTA and economic liberalization impacted migration? (page 69)
4) Today Mexicans drink more Coca-Cola than milk. What are some other changes to the foods people eat as a result of NAFTA? (page 71)
5) How did the United Farm Workers (UFW) movement in California organize grape growers in the 1960s? (page 77)

Chapter 4: “Just a Cry for Bread”
1) Why was tea such a popular drink in England starting in the mid-1600s?
2) Where did the tea leaves come from and how did the global tea market work in terms of supply and demand? (page 88)
3) What is Rhodes’ Conundrum? (92)
4) How did the Marshall Plan influence the global food economy after WWII? What were the international and domestic worries about food surpluses in the US? (98)
5) Why was the inclusion of agriculture a key addition when the World Trade Organization was launched in 1995? (104)

Chapter 5: The Customer Is Our Enemy: A Brief Introduction to Food System Business
1) You might think of the clothing store when you hear “Banana Republic,” but how does this term apply to countries in Central America and the Caribbean? (109)
2) Explain how the concentration of market power in the food system (including seed supply companies and the packaged foods industry) has become a trend. (110)
3) Why was the discovery of high fructose corn syrup in the 1970s a breakthrough that would change the lives of millions? (123)

Chapter 6: Better Living through Chemistry
1) What was India’s “Green Revolution”? Would you say that it was successful or not? (page 134)
2) The Indian state of Kerala opted for a political solution. What did they do and why does Patel say that this approach to agrarian change “seems to have had a more enduring impact than the Green Revolution”? (page 137)
3) How will a “second Green Revolution” in India be based not on fertilizers and improved seed but on biotechnology? (page 141)
4) What can engineered crops like Bt Cotton and the RoundUp-ready crops produced by the Monsonto Corporation promise to farmers? (page 143)
5) How can the pesticide industry be compared to the software industry? (page 144)
6) Describe some attempts to develop cros that will help the poor. (page 146)
7) What are some problems with geneically modified crops? (page 148)
8) How are agricultural biotechnology advances playing out in Africa and Cuba? (page 156)

Chapter 7: Glycine Rex
1) What is lecithin, one of the “secret ingredients” you’ll find in a chocolate bar? (page 174)
2) Why did the popularity of soybeans reach a high point in the 1970s? (page 188)
3) Who is Blairo Maggi and what influence did he have on Brazil’s soy boom? (page 195)
4) What is the “sustainable soy” movement? (page 209)
5) What is the Landless Rural Workers Movement (“Movimento dos Trabalhadores Rurais Sem Terra” (MST) in Portugese) and why has Noam Chomsky called it “the world’s most important social movement”? (page 211)

Chapter 8: Checking Out of Supermarkets
1) How did the “Self-Serving Store” patent influence the evolution of supermarkets in the US? (page 224)
2) How is the consumer controlled and tracked in a supermarket? (page 230)
3) What are some surprising facts about Walmart in this chapter? (page 237)
4) How do systems like Community Supported Agriculture (CSAs) or coops like The People’s Grocery in Oakland offer effective alternatives to supermarkets? (page 254)

Chapter 9: Chosen by Bunnies
1) How does the history of the invention of food processing involve military conflicts? (page 261)
2) What is the Slow Food Movement? (290)
3) Analyze the chart on the next page. What are the consequences of cooking less in the home and spending less time preparing food? (page 292)
4) What is “food sovereignty”? (page 297)

Conclusion: Inside the Hourglass

In this final section, Raj Patel offers ten ways that we can, as individuals, can begin to change state of the world’s food system.

1) Transform our tastes—don’t eat processed food, eat slowly, prepare your own food, and savour it.
2) Eat locally and seasonally.
3) Eat agroecologically—try to eat food grown in harmony with its local environment, learn about your local environment and grow your own food.
4) Support locally owned business.
5) All workers have the right to dignity —freedom to organize and work without persecution.
6) Profound and comprehensive rural change —build rural areas with economic opportunities and a quality of life that attracts families.
7) Living wages for all.
8) Support for a sustainable architecture of food—rethink open space and sprawl as we develop.
9) Snapping the food system’s bottleneck— among other things, end subsidies to agribusiness, aggressively police their monopolies and tax processed food to a level where it reflects the harm it does.
10) Owning and providing restitution for the injustices of the past and present—that rich countries of the Global North such as Britain forgive debts and pay reparations to countries exploited in the Global South.

1) Which suggestions he gives do you think are most effective?
2) Which are most imporatant?
3) Are there any you disagree with? Explain your choices.
Learn More About Stuffed and Starved
pdf
Back to Top