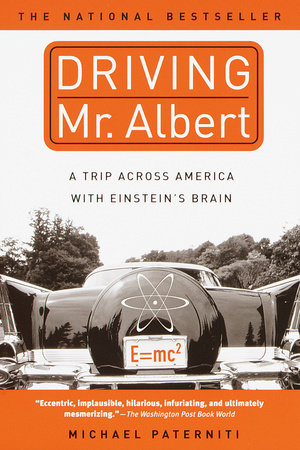 At first, journalist Michael Paterniti thought the trip would be a caper, a chance for him to serve as chauffeur on a quirky escapade. His passenger? An eighty-four-year-old pathologist named Thomas Harvey, who performed the autopsy on Albert Einstein in 1955–then removed the brain and took it home with him. Forty years later, Paterniti would help him transport the brain coast to coast. The curious cargo lay in the trunk of the rented Buick Skylark, floating in a tub that was zipped securely in Harvey’s gray duffel bag. Einstein himself almost seemed to join the road warriors as they set out for California, where the genius’s perplexed granddaughter prepared to meet with them.

Between New Jersey and their destination, Paterniti and Harvey found themselves on a nearly mystical excursion, marked by stranger-than-fiction museums, an evening in the living room of legendary beatnik William S. Burroughs, a riled crowd in Vegas, and vistas of nearly every terrain America has to offer. At each turn, the mysteries of Einstein’s mind reverberated, raising provocative queries about the nature of legacy and life.

The questions and discussion topics that follow are intended to enhance your reading of Michael Paterniti’s Driving Mr. Albert. We hope they will enrich your experience of this spectacular journey.

1. In the book’s epigraph, what traits does Virginia Woolf include for her portrait of a "splendid mind?"

2. What parallels did you detect between Einstein’s life and Harvey’s?

3. Driving Mr. Albert unfolds in some ways like a detective story. What mysteries emerged throughout the book? Were all of them solved?

4. Do you think Thomas Harvey’s true motivation in taking this trip was to deliver the brain to Evelyn? Did he and Michael Paterniti share any unspoken personal goals at this point in their lives? What conflicts was Paterniti able to resolve through this trip?

6. How would you characterize Harvey’s take on history, as revealed at stops such as the Harry S Truman Presidential Library?

7. Does Harvey seem like a likely character for William S. Burroughs’s circle? What portraits of a mind are delivered in chapter 10, "Dr. Senegal, I Presume?"

8. What does the Garden of Eden tour indicate about human perceptions of death and the spectrum of mortuary practices undertaken in America? How did the museum’s mission differ from Harvey’s?

9. In Chapter 14, "What We Talk About When We Talk About Meat," Paterniti theorizes that Kenji Sugimoto is really Harvey’s alter ego. Do you agree?

10. When Harvey lectures before a rowdy audience in San Jose, the experience captures many contemporary issues, including the challenge of engaging students in science. What does Harvey’s presentation teach us about reaching a new generation of potential Einsteins?

11. How did you react to Roger Richman and the concept of Einstein’s image now being represented by a celebrity-licensing agent?

12. What images of love and relationships are presented in Driving Mr. Albert? How is Paterniti affected by watching the reunion with Raye? What observations does he offer about Einstein’s capacity for love?

13. Despite his occasional fears that someone may try to steal the brain, Paterniti often told strangers about his cargo. What are his expectations in making these revelations? How might you have reacted if you had been one of the bystanders he told?

14. How does Evelyn’s perspective on the brain differ from the others encountered in the book? How significant is the question of whether she is indeed Einstein’s genetic descendant?

15. Discuss the science of Einstein in relation to the book. What metaphors can you find for his notion that all energy has mass? How is the theory of relativity reflected in the way time unfolds for Einstein’s brain over its decades-long journey? If his famous equation e=mc2 were applied to the events of your life, how would you define the constant?

16. Reading the book as biography, what new facts did you discover about Einstein’s life? How did this depiction of him differ from the one perpetuated by pop culture?

17. What is it about the American road trip that made for such a good medium in exploring Einstein and the story of his brain? Why are so many memorable narratives set against the backdrop of the open road with its chain motels and speed traps?

18. What does Einstein’s decision against surgery indicate about his mind-set regarding medicine and mortality at that point in his life? Do you think Einstein would have approved of Harvey as the guardian of his brain?

19. Can a holy grail for intelligence (or any other similar trait) be contained in a specimen such as Einstein’s brain? What might a new generation of neuroscientists and pathologists (such as Elliot Krauss, Harvey’s final beneficiary) be able to accomplish with Einstein’s brain? What twenty-first-century pressures will they face?

Yours in Truth
Jeff Himmelman

The Boy Who Runs
John Brant

God of the Rodeo
Daniel Bergner

The Man in the Rockefeller Suit
Mark Seal