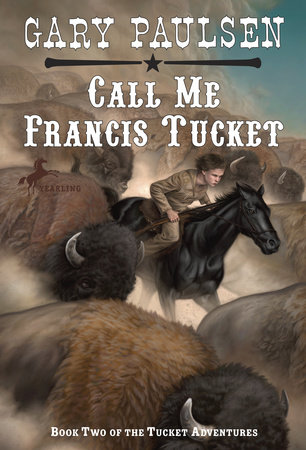 My initial inspiration for creating Mr. Tucket was to cover the West with a single person. I hate to use the word saga, but it’s kind of that. I thought of a boy going through the various aspects of the West when it was forming, starting with the mountain men, to what we view as the West–you know, the West of the cowboys.

One of the reasons I think that Francis has become popular is that I think there are similarities between Francis Tucket and Brian in Hatchet. Both boys must deal with a survival situation. I think that the theme of having to face real problems that have happened to real people at one time or another–especially to face them as a young person–is very intriguing to readers, especially young readers. When I was young and I was hunting, I would get into trouble–get caught in storms, blizzards, and that sort of thing. I found those experiences very challenging and intense and I think that feeling comes across in the books.

One of the reasons I put Francis in the Mexican War in Tucket’s Ride was because the Mexican War has historically been ignored in writing. Historians jump right from mountain men to cowboys and longhorns and topics like that. I wanted to discuss, or at least have something move through, the Mexican War, which was a silly time–an absolutely crazy time–for America because it was an outright war of aggression by America.

The reaction I’ve had from teachers and librarians is that they want more. Some specifically ask to have Francis go to a certain spot and deal with specific historical events. I get quite a bit of mail like that. It would be impossible to have him do everything that teachers want me to have him do. Mr. Tucket couldn’t ride enough to cover the territory that needs to be covered, but he will definitely get around. I’m going to do many more of these books.

After a year with Mr. Grimes, Francis has learned to live by the harsh code of the wilderness. He can cause a stampede, survive his own mistakes and face up to desperadoes. But when he rescues a little girl and her younger brother, Francis takes on more than he bargained for.

Born in Minneapolis, Minnesota, Gary Paulsen is one of America’s most popular writers for young people. Although he was never a dedicated student, Paulsen developed a passion for reading at an early age. After a librarian gave him a book to read–along with his own library card–he was hooked. He began spending hours alone in the basement of his apartment building, reading one book after another.

Running away from home at the age of fourteen and traveling with a carnival, Gary Paulsen acquired a taste for adventure. A youthful summer of rigorous chores on a farm; jobs as an engineer, construction worker, ranch hand, truck driver, and sailor; and two rounds of the 1,180-mile Alaskan dogsled race, the Iditarod, have provided ample material from which he creates powerful stories.

The Tucket Adventures offer opportunities for making connections with the subjects areas of geography, history, language arts, the arts, literature, and science. The books also offer opportunities for exploration of themes or topics such as Westward Movement, Caring for the Environment, Survival, and Heroes. You can successfully use any one, two or all three books in your classroom. Sample the suggested classroom connections that follow and offer your students appropriate choices to deepen their understanding and enjoyment of the books.

Pre-Reading Activities
Have students examine the United States in 1848. Give students a blank map and have them color in only those states and territories that were part of the Union–be sure to include the year and circumstances surrounding each state’s admission. (You can break the class into small groups and each group can work on a particular state.) Afterwards, add states that were admitted after 1848 so that students can visually see the Western expansion of the country.

Assign students short research projects on the following topics: Western Explorers, the Plains Indians, Wagon Trains, the Oregon Trail, mountain men, California, and the Pony Express. When the students have gathered the information, guide them in creating a mural that features significant episodes in the opening of the West, arranging the events in the form of a time line.

Westward Movement
Francis meets up with another wagon train in Call Me Francis Tucket. Life on a wagon train was like living in a small, moving town. In what ways was this true? Discuss the living conditions in a wagon train and how settlers managed to carry enough food and water to sustain them on their journey. Also examine the other travel options available in 1848.

Survival
In Call Me Francis Tucket, when Courtweiler and Dubs take his things, Francis thinks,

"A real knock’em, sock’em ripsnorter guaranteed to keep any boy and any girl. . . enthralled from first page through last. . . . Superb characterizations, splendidly evoked setting and thrill-a-minute plot make this book a joy to gallop through." — Starred, Publishers Weekly

"[Francis Tucket is] a cool-headed survivor in the mold of Hatchet’s protagonist. . . a heart-stopping good read." — Starred, Publishers Weekly

"Many students have enjoyed your novels and learned valuable lessons from them. I enjoy teaching them for the same reason." — B.B., Franklin Elementary School

"I really enjoyed reading your book, Mr. Tucket. The whole book had an outstanding way of making a picture in my mind. Your characters seemed to come to life. Though I’ve read a lot of books, Mr. Tucket is one of the best so far."–Angelica, Student

In a Flash
Donna Jo Napoli

The Secrets of Vesuvius
Caroline Lawrence

The Curse of the Buttons
Anne Ylvisaker

Who Stole the Wizard of Oz?
Avi

Who Is Kamala Harris?
Kirsten Anderson and Who HQ

The Star of Kazan
Eva Ibbotson

Skating with the Statue of Liberty
Susan Lynn Meyer

Hatchet
Gary Paulsen
Back to Top