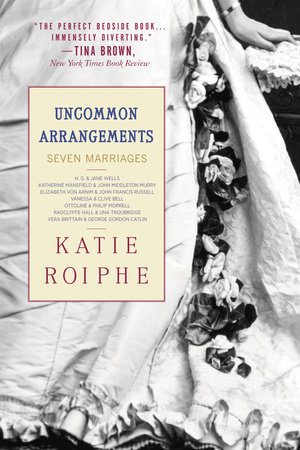 In this intimate glimpse of unconventional love and marriage, acclaimed cultural critic Katie Roiphe reveals eye-opening details regarding the private lives of seven luminaries, ranging from novelist H. G. Wells to painter Vanessa Bell. Capturing British artistic life in the wake of World War I and Modernism, Uncommon Arrangements draws on memoirs, passionate letters, and often overlooked journals, revealing a restless undercurrent that led many creative mavens to experiment romantically. These "marriages à la mode" were marked by open love triangles along with revolutionary ideas about gender roles, economic equality, and happiness itself. And in the face of crisis, whether Katherine Mansfield’s fatal tuberculosis or the banning of Radclyffe Hall’s progressive novel, each of these arrangements provided uncommon resolutions. Featuring a community of couples who read each other’s work, attended parties together, and spread commentary about one another’s romantic inclinations, Uncommon Arrangements transports us to a fascinating, lost world while exploring timeless aspects of human relationships.

1. In the book’s introduction, the author raises a series of questions that shaped her approach. How would you respond to her central queries: Do some of these unusual arrangements work? Was all of this free thinking simply a highly articulated cover for consummate selfishness? Were some of these extraordinary arrangements admirable?

2. If you had been in Jane Wells’s position, would you have stood by your husband despite his out-of-wedlock child and decade-long relationship with Rebecca West? Do you believe that fame and fortune were the factors that motivated Jane? What does the broad difference in temperament between Jane and Rebecca tell us about H. G. Wells himself?

3. How would you characterize the nature of Katherine Mansfield’s romance with John Middleton Murry? How did she navigate the spectrum of fantasy and reality as her life unfolded?

4. Was there a common thread between the men in Elizabeth Von Arnim’s life? How did H. G. Wells compare to her husbands? What role did brother-in-law Bertrand Russell play in guiding Elizabeth through her marriage?

5. What aspects of love are illustrated by Vanessa Bell’s inclusion of Duncan Grant in her marriage to Clive Bell? What is the effect of transforming a partnership into a triangular dynamic? To what extent did Virginia Woolf attempt to, or succeed in, "participating" in her sister’s marriage?

6. The author tells us that Philip Morrell may have been the inspiration for Katherine Mansfield’s story, "Marriage à la Mode," featuring "a sweet, plodding man mocked and exploited by his wife’s interesting and artistic weekend guests." In what ways was this theme reflected in other marriages described in the book? To what extent does the concept of being fashionable shape the way contemporary artists conduct their relationships?

7. In what way did passionate living both sustain and threaten the Morrells’ marriage? What caused Ottoline to spark so much attraction in men? What made Bertrand Russell’s involvement different from the others she encountered?

8. In emulating traits of English gentlemen, how did Radclyffe Hall approach the concept of power in her relationships? How might her writing have flourished further—or suffered—had she lived in tolerant contemporary England?

9. What might have motivated Hall to leave Evguenia’s income entirely in Una’s hands? How did affluence enhance the ability of Hall, along with other luminaries featured in the book, in crafting their unconventional personal lives?

10. The author tells us that Vera Brittain, like many other women whose beloved had died in the Great War, felt compelled to find an injured soldier to nurse. In what way does this experience help us understand the mindset of British society in general as it reacted to the casualties of war? Does it explain her "semidetached" marriage to George Gordon Catlin, or her tremendous attachment to Winifred Holtby?

11. Many of the figures mentioned in the book, including Vanessa Bell and Duncan Grant, were Jane Austen aficionados. What parallels and complete opposites exist between Jane Austen’s novels and the members of these circles? How might Jane Austen’s characters have responded to the uncommon arrangements described in this book?

12. What patterns and personalities occurred multiple times throughout Uncommon Arrangements? What seem to be the makings of the loyal partner versus the Other Man or Other Woman? What are the makings of the "interloper" who is comfortable joining an existing household?

13. Discuss the aspects of child-rearing presented in the book. From the point of view of the children mentioned, were uncommon arrangements beneficial? What accounts for the varying attitudes toward offspring, ranging from H. G. Wells’s dislike of children to Philip Morrell’s elation at becoming a father?

14. In her closing paragraph, the author quotes T. S. Eliot’s "The Waste Land": "These fragments I have shored against my ruins." In addition to letters, what fragments were left behind by the figures in this book? What is unique about the artifacts created by journalists, painters, and fiction writers? How did they seem to address the fact that future generations might wish to examine their "ruins"?

15. Which works produced by this circle were you familiar with? How did reading Uncommon Arrangements shape your understanding of these works?

16. In interviews the author has said that she finds it interesting that some of these couples decided to marry in the first place, but then later decided not to get divorced. What does this say about the power of the institution of marriage?

17. How do you feel these marriages are the same or different from conventional marriages?

Learn More About Uncommon Arrangements
print
Back to Top