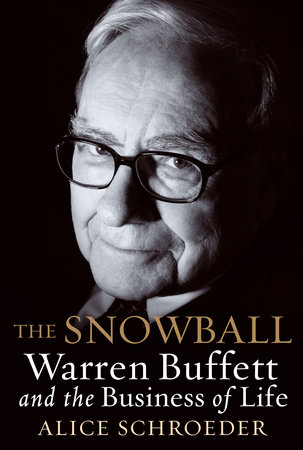 “Life is like a snowball,” Warren Buffett once remarked. “The important thing is finding wet snow and a really long hill.” Now, in the new book about the “Oracle from Omaha,” which is the first of its kind to be both a life story and a biography of ideas, readers worldwide have an unprecedented opportunity to discover how America’s savviest investor amassed his legendary “snowball,” a fortune that spans not only multi-billion-dollar financial achievements but also includes a wealth of beloved friends, family, and business partners, and a lifetime of sparkling experiences.

Buffett has also amassed a wealth of respect, drawing thousands from around the globe who seek his wisdom and have hoped he might write a book one day. Though Buffett never wrote a memoir, the time seemed right to look back on the “really long hill” that propelled him to success. Discovering a suitable ally in insurance analyst and financial reporter Alice Schroeder, Buffett granted remarkable access to his files, his closest associates, and his most personal memories of his boyhood, marriage, and fatherhood. His cooperation with Schroeder would lead to more than five years of in-depth research and would produce a book that, in keeping with Buffett’s tradition of unrivaled results, is unlike any biography, business book, or family history you have ever read.

Unlike celebrities who hire ghostwriters to produce flattering tributes, Buffett told Schroeder that if she encountered conflicting versions of an event, she should emphasize the one that was least flattering to him. And by choosing Schroeder to tell his story, he put his epic story in the hands of an industry insider who would ask him tough questions about the hundreds of deals he has made. Along the way, she translated his business triumphs into a riveting series of deeply human narratives, telling us not only that the price of his Berkshire Hathaway stock eventually topped a record-setting $100,000 per share but also bringing to life the colorful cast of characters involved in making BRK one of the most surprising fiscal victories in business history. With equal candor, The Snowball reveals the emotional toll exacted by Buffett’s devotion to his work, and the emotional rewards he has reaped through philanthropic strategies that have sparked a radical new vision of the purpose of wealth in the world.

Whether you read it with your book group or your investment club, your lifelong friends or your board of directors, The Snowball will give you priceless lessons in life.

The questions and discussion topics that follow are intended to enhance your reading of Alice Schroeder’s The Snowball. We hope they will enrich your experience of this unparalleled American success story.

1. Discuss the quotation that gave this biography its title: “Life is like a snowball. The important thing is finding wet snow and a really long hill.” What makes Warren Buffett better than others at finding and recognizing “wet snow”? What gives him the patience and discipline to endure the long haul? Describe the “snowballs” you have accumulated, financial or otherwise. What can you do to help them grow and gain momentum?

2. Buffett often refers to having won the “ovarian lottery,” particularly because he was born in the United States in 1930 and was raised in a relatively stable household. Was his success due to circumstance as much as to innate talent or personal drive? How do his work habits compare to those of most people you know–not just in terms of how many hours he devotes to work, but also how he spends those hours?

3. Would you have been one of Warren Buffett’s initial investors? In what way did some of the qualities that caused him to be rejected (even blackballed from a country club) prove to be the very qualities that helped him create wealth?

4. Discuss Susan Buffett’s legacy of deep compassion and social justice. In what way did her personality complement and complete Warren’s? How did she contribute to his financial success? What changes did she seem to experience when she went from being Susan Thompson to Susan Buffett, then moved toward greater independence in California?

5. How did Warren and Susie Buffett’s childhoods prepare them for the fame and opportunity that lay ahead? How did it affect Warren to be raised against the backdrop of Howard’s career as a conservative politician? What emotional hurdles did Leila set? How was Susie able to help him overcome them?

6. Discuss the guiding principles that have driven Buffett’s investment decisions (the book’s index provides a helpful list, under “Warren Buffett/Investing Principles”). How many of these principles have subtly changed over the decades? What distinguishes his “cigar butt” strategy from the strategies of other value-seekers, or from the corporate raiders of the 1980s and early 1990s?

7. Why do Buffett’s strategies adapt so well to a variety of sectors, from newspapers to insurance companies, and even the rise of new technologies? How did your predictions about the high-tech bubble compare to Buffett’s warnings delivered at Sun Valley in 1999, described in chapter two?

8. Schroeder weaves business history and personal history to tell Buffett’s story. What does this teach us about the importance of the human element in investment decisions? How did tips from Dale Carnegie’s class prove to be just as important as financial savvy when Buffett began targeting companies to acquire?

9. What traits did Katharine Graham and Buffett’s other trusted friends share? What kinds of people is he drawn to?

10. Would you be content with a long-distance marriage like the one Warren and Susie had? What are the advantages of such an arrangement, particularly for spouses who have been married for a long time? What made Astrid a good match for Warren, especially at the time in his life when they met?

11. Discuss Warren and Susie’s parenting styles. How do their children compare to the children of other wealthy parents you have heard about? Did you agree with Warren’s observation that many wealthy parents who decry welfare programs actually create a form of welfare within their own families?

12. What did it cost Warren Buffett emotionally to amass his record-breaking fortune? How did he recoup some of those personal losses? How did you react to his observation in chapter 58, “Buffetted,” that “the trouble with love is that you can’t buy it”?

13. Why was Buffett able to maintain modest tastes, preferring a hamburger and French fries to haute cuisine and enjoying the same home, car, and clothes for years? What makes him eschew status symbols? What do you think the “purpose” of money is?

14. What does the story of Rose Blumkin, captured in chapter 44, indicate about succeeding in business in America? How did her business strategies mirror Buffett’s in many ways?

15. What drew Buffett to Salomon Brothers? What does this episode demonstrate about the way a reputation of integrity can be made and broken in corporate America? Does the culture of your workplace have more in common with Salomon or with Buffett’s office on Kiewit Plaza?

16. How familiar had you been with Berkshire Hathaway before reading The Snowball? Why have so few other corporate leaders had the courage to try unconventional approaches to growing a company, such as not splitting the stock price?

17. If you had been one of Warren and Susie’s children, would you have sold your shares in Berkshire Hathaway? If so, how would you have spent or invested the proceeds? What charities would you have supported during the periods of mandated philanthropy?

18. Were you surprised by the fact that Buffett approves of estate taxes? Do you agree with his rationale?

19. Discuss Buffett’s decision to give a substantial number of Berkshire Hathaway shares to the Bill and Melinda Gates Foundation, and the ways this decision inspired others, from all walks of life, to become philanthropists. What is the potential for the world if most philanthropists do as Buffett did, rather than building monuments to themselves?

20. How will you apply Buffett’s wisdom in the closing chapter, “Claim Checks,” to your own life?

Learn More About The Snowball
print

A Man for All Markets
Edward O. Thorp

How Good Do You Want to Be?
Nick Saban and Brian Curtis

Am I Being Too Subtle?
Sam Zell

The Woman Behind the New Deal
Kirstin Downey

The Buy Side
Turney Duff

Out and Back
Hillary Allen

I Am Zlatan
Zlatan Ibrahimovic

Bad as I Wanna Be
Dennis Rodman

Slaying the Tiger
Shane Ryan
Back to Top