What I Know Now Reader’s Guide 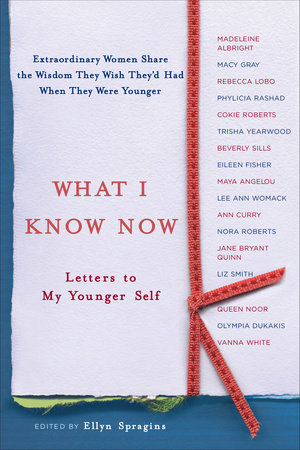 What I Know Now Reader’s Guide

In touching, inspiring, and heartfelt letters, more than 40 of the most notable women in modern history reveal wishes for their younger selves. As one might expect, the letters such driven and ambitious women might write to their younger selves include advice to slow down, to have fun, to appreciate life–advice most modern women could use. But in addition, these remarkable letters give us a frank and penetrating insight into who these women were and are, from the floundering actress that is a young Camryn Manheim, to Kitty Kelley on the brink of releasing her controversial book, The Family, to a fledgling reporter, Ann Curry, as she attempts to shed her uniqueness to fit in with mainstream media. Stay true to yourself. Don’t be afraid to spread your wings. Be smart about the risks you take. The wisdom in these letters is hard won, battle proved, and above all, gifted with love.

The questions below are designed to help guide your discussion of the book.

1. If you had the chance to send a letter to a younger version of yourself, how would you approach the task? What moment would you choose, and why?

2. If you discovered that an older version of yourself had sent you a letter, what would you expect it to say?

3. In the introduction, Ellyn Spragins explains her motivation for this project as filling part of the gap left by the loss of her own mother. What do you think of the task itself? Did the motivation strike a chord with you? What other reasons can you see for such an undertaking? What benefit is there to the editor of an anthology like this? How is it similar to what the reader or the letter-writer herself gains from the experience? How does it differ?

4. What do you think motivates the advice in the book? Is there any commonality about how the modern-day women see their younger selves?

5. What themes in the book do you find most striking? Is this the type of advice you expected that accomplished women would want to impart to their younger selves?

6. How do the writers use the letters to themselves–i.e., are they trying to change history, improve their lot, show love? What other ways could a letter such as these be used?

7. Many of the letters in the book encourage the younger selves simply to pay attention to instinct–whether passing up a photo shoot that doesn’t feel right or backing out of an engagement that’s progressing for all the wrong reasons. Is this good advice for all women? Are there any times in your own life when instinct has led you wrong? Any notable times when instinct has saved you from trouble?

8. One theme that ties together many of the letters in What I Know Now is the struggle of busy, successful women to balance work and family. In this book, the women seem to overwhelmingly resolve that focusing on family is a critical priority, and deserves all the attention it can get. Do you think this resolution is consistent in the book only because these are such driven and ambitious women, or is this a universal truth? Reflecting on your own life, do you have any regrets about having chosen life over work or vice versa?

9. Some of the letter writers, such as Jane Kaczmarek and Macy Gray, use the opportunity of the letter to point out to their younger selves the low point of their life or career so far. Others, such as Picabo Street, encourage their younger selves to simply enjoy the highest points. What do you think of this concept of a life lived between peaks and nadirs? Is it possible to see and recognize these points as they’re happening, or only in retrospect?

10. Discuss the trouble the younger selves seem to have enjoying and appreciating life. Do you think giving up some of life’s joy is a necessary compromise for ambitious people, and women in particular? Why or why not?

11. Since the featured women are writing to their younger selves, the letters are necessarily addressed back in time–sometimes by several decades. Do you think any of the advice in the book is outdated or ahead of the time it’s addressed to? What, if anything, can it teach us about the evolution of women’s place in society and the workplace?

12. The author’s realization is that all women have something to teach all other women, that we are all mothers to each other, led her to seek out the women in this book. Do you think this concept can be expanded to include all people, not just women? Is there anyone not included in this book, male or female, whose letter you would like to see? What is it about the female experience in particular that is unique and lends itself to this kind of exercise?

Ellyn Spragins is an editor at large for Fortune Small Business. She wrote the “Love and Money” column in the New York Times business section for three years. She first edited five of these letters for an issue of O, The Oprah Magazine. She lives in Pennington, New Jersey, with her family.

For free supplementary materials including information on book groups, suggestions for further reading, chances to win books, phone-in author appearances, and much more, e-mail BroadwayReads@RandomHouse.com.
Learn More About What I Know Now
print

Parent Nation
Back to Top