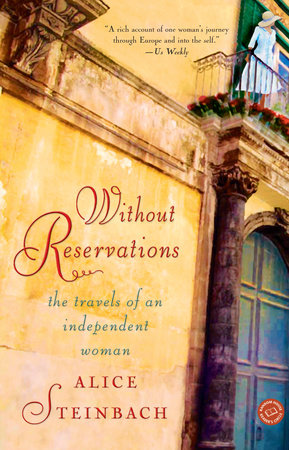 1. While relaxing at a café in Paris, Steinbach reflects, “what adds up to a life is nothing more than the accumulation of small daily moments.” What does she mean by this? Do you think it is possible to gain a greater understanding of the whole by looking, individually, at its parts? What factors in Steinbach’s life, and perhaps your own, caused her to overlook such minute, beautiful moments?

2. Over the course of the book, Steinbach often personifies the cities, towns, and villages she visits. “Rome and I are not lovers. We are not even friends,” she writes, when reflecting on her unpleasant experience on the Spanish Steps. When describing three towns along the Amalfi coast she comments, “If Amalfi were a man…he’d be dressed by Calvin Klein and reading Tom Clancy. Positano would wear Armani and carry a book by John Le Carré. But if Ravello were a man…he would be in chinos and a fresh white oxford shirt with no tie, buried in a book by Graham Greene.” Why do you think she chooses to describe the places she encounters in human terms? What effect does this technique have on you, the reader?

3. In her travels, Steinbach meets people from all walks of life. In one observation, she provides a fresh take on the old maxim, “don’t judge a book by its cover,” when she writes, “Paris guards her inner beauty from the casual observer. To find it one must look beyond the façades. It is true of people also, I think: their spirits exist behind their façades, beyond their words.” Who does she meet along her journey that helps to reaffirm this belief? What do these encounters teach her about herself and the world around her?

4. Steinbach constantly reflects on her own sense of adventure or lack thereof. She tries to nurture it and let it grow at its own rate, a rate that is both comfortable and exciting for her. Reminiscing about her youth she notes, “I made dangerous choices in those years, thinking myself bold and adventurous. Later I would come to understand I hadn’t been daring at all, just driven by confusion and hormones. The person capable of true daring, I knew now, possessed two admirable qualities: curiosity and courage.” Do you agree with that definition of a “daring” individual? Thinking back to all of Steinbach’s European adventures (and misadventures), do you think she fits her own bill of what it means to be “daring”?

5. Remembering an interview she once conducted with French actress Jeanne Moreau, Steinbach realizes that “Moreau’s declaration of independence from ‘looking into the mirror that others hold up to me’ was a deft description of what I was after on this trip.” Searching for the approval or acceptance of others seems to be a recurring theme in Steinbach’s book and, more importantly, a recurring theme in her daily life in America. To what extent was she able to overcome these insecurities during her travels? Do you think you would react similarly? Why or why not?

6. What role does Steinbach’s grandmother, or more correctly, the memory of her grandmother, play in her road to self-awareness? Are there people or events in your past that continue to help you understand the present, and perhaps, address the future?

7. Steinbach asks herself, “Is it possible to change your outer geography without disrupting the inner geography? The travels within yourself? Today I traveled back to my past and forward to a future shaping itself somewhere at the edge of my thoughts. But I also traveled to a place less often visited: the childlike purity of the ticking moment.” If Steinbach’s grandmother is a symbol of her past, are there characters that embody Steinbach’s immediate present? To what extent does Steinbach’s unexpected relationship with Naohiro serve as reminder of the beauty of the present? If Steinbach’s grandmother acts as a constant connection to the past, Naohiro a reminder of the present, which character, if any, is the embodiment of the future?

8. When in Venice, Steinbach imagines herself, if only for a brief moment, to be Katharine Hepburn in the film, Summertime. Observing a lounge singer in a Paris café, she asks, “Who did she imagine herself to be? Marlene Dietrich? Edith Piaf? Was that the image that sustained her when she examined the realities of her life?” At what other moments in her travels does Steinbach seem to slip into the safe world of fantasy, and at what moments does she seem to awaken herself to reality? At what times in your own life does fantasy plays an important role for you?

9. Steinbach often views the people and places she visits through the lens of literature. For instance, at the prospect of reuniting with Naohiro in Venice, she compares herself to Penelope awaiting Ulysses’ return from Troy, and often she draws parallels between her own experiences and those of a young Jane Eyre. What other literary figures does Steinbach evoke? Have you ever used the world of literature to better understand your own feelings? How do you think our interactions with literature help to shape our responses to the world around us?


10. In a postcard to herself referring to her frightening experience in Rome, Steinbach notes that Albert Camus once wrote, “what gives value to travel is fear.” Do you agree with this statement? Why or why not? Steinbach goes on to write: “a little dash of fear gives value to more than just travel. For one thing, it can teach us to be brave.” Do you think travelling alone would instill in you a sense of bravery you might otherwise not have possessed? Some might argue that it is not brave, but rather foolish to travel alone. Have ever you subscribed to this line of reasoning? If so, did Steinbach’s book convince you otherwise?

11. Without Reservations is rich with one woman’s observations, reflections, and personal philosophy. By the end of her travels, Steinbach discovers in herself a woman she thought had been lost in time or worn down by age. Her time alone, time spent encountering both old memories and new ideas, helps her re-ignite her independent spirit and reawaken her sense of fierce individuality. Did reading Steinbach’s story inspire you in the way that Freya Stark’s memoir inspired her? If you were to take such a journey, where would you go? What would you want to do? What aspects of such a journey appeal to you the most?

Learn More About Without Reservations
print
Back to Top