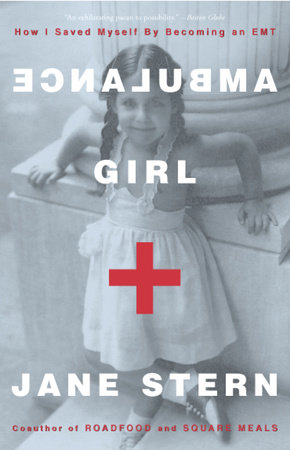 1. Stern seems to find the experience of anonymity refreshing, even euphoric. Of her first day in a hospital emergency room, she writes, “I am just a spare pair of hands that day. I have no name, no authority…I am hooked.” Similarly, her strategy for getting through the terrifying experience of driving a fire truck for the first time is to tell herself, “I exist only in this moment. I have no history at all.” Why is this displacement of self so attractive to her? Do you see it as a form of denial, or as a healthy release from self-absorption?

2. Stern’s encounter with her “first dead guy” drives home the inevitability of unanswered questions in life. She wants to know why the man’s brother didn’t notice he was blue; why the brother suffers from a grotesque facial deformity; why the brother failed to call 911 earlier in the day. How does she deal with these unanswerable questions? How does relief figure into her emotions that day?

3. How does Stern’s induction into the EMT world alter her perception of her hometown? Why does she note that “Now when I stop at the service station my eyes are cast downward with humility”?

4. Stern’s moment of reckoning comes on a grounded plane, where she is trapped for six hours with no food, no fresh air, and a clogged toilet. Discuss her statement, “I died the thousand deaths of a coward before the plane finally took off.” What allows her to recall in retrospect the one moment on the plane when she “didn’t feel like the whole world was collapsing”? How would Stern react to being trapped for six hours on a grounded plane today?

5. Why does Stern call duct tape “the operative semantic symbol of the dividing line between Fairfield County snooty and Fairfield County down-to-earth.” How does the disparity between New Canaan—where Stern takes her EMT training, and “where the ambulance cot blankets look like the monogrammed coverings of show horses” —and Georgetown, mirror the disparity between Stern’s pre-EMT and post-EMT lives? How do Stern’s friends react to her sudden decision?

6. Why does the class about head injuries throw Stern completely off balance? What painful family memories does the session dredge up, and why does she remind herself, “It is important to know that there will not be anyone waiting under the window to kill me”? What simple gesture snaps her back to reality? Why?

7. Stern’s wry humor shines in episodes such as one in which she closes herself into an elevator with a “homicidal schizophrenic karate expert” in a wheelchair, without guards or restraints. Where else in the memoir do you find comic relief? Would Stern’s account be equally effective without the humor?

8. As she volunteers at the low-tech, profoundly un-scary Georgetown Haunted House on Halloween, Stern contemplates a lifetime of being fearful. She writes, “Knowledge replaces terror for me, and instead of being afraid I can now safely watch one of the Heibeck brothers’ young sons lying on a table, covered with raw chicken livers, screaming as if he is having live surgery performed on him.” In what way does this sum up the theme of Stern’s memoir? When have you found a way to debunk a frightening phenomenon, and allowed “knowledge to replace terror” in your life?

9. When John, a beloved father figure to Stern and her husband, emerges from a two-week coma, he is brain damaged, partly paralyzed, and had lost all memory of his rich life. Stern is devastated to realize that, in certain circumstances, a successful EMT “save” is perhaps no more than a crass intervention in what might be a timely death. How does this realization affect her? How does it change the EMT work she performs in the following weeks? Do you believe that human life should be saved in absolutely all circumstances? If not, how would you draw dividing lines for making the distinction?

10. How do Stern and her husband react, individually and as a couple, during the crisis of September 11th, 2001? Do their reactions parallel your experience of that fateful day? In what way does the experience cement Stern’s commitment to her town and her new vocation? Why does the team elect not to visit Ground Zero?

11. Stern is sophisticated, refined, and very feminine. Why does she delight in the firehouse, with its beef jerky, Budweiser, and rude language? Discuss the symbolic significance of the special attaché case and its contents.

From the Hardcover edition.
Learn More About Ambulance Girl
print

Where the Light Gets In

Here’s the Deal
Back to Top