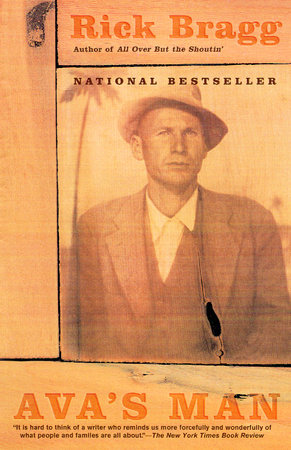 “Grab[s] you from the first sentence . . . [and] stays with you long after you put it down. . . . It is hard to think of a writer who reminds us more forcefully and wonderfully of what people and families are all about.” —The New York Times Book Review

The introduction, discussion questions, suggested reading list, and author biography that follow are designed to enhance your group’s reading of Ava’s Man, Rick Bragg’s brilliant story of his grandfather’s unique life, the follow-up to his bestselling and deeply affectionate portrait of his mother, All Over but the Shoutin’.

“Since I never really had a grandfather,” Bragg writes in the prologue, “I decided to make me one. . . . I built him up from dirt level, using half-forgotten sayings, half-remembered stories and a few yellowed, brittle, black-and-white photographs that, under the watch of my kin, I handled like diamonds” [p. 10]. The result is a vividly drawn portrait of a man who made a profound and lasting impression on all those who knew him. Charlie Bundrum, the father of Bragg’s mother, was a poor, backwoods roofer and sometime maker and seller of moonshine. He was a man who lived all his life in poverty and settled his arguments with his fists—a man so quick he could snatch a squirrel out of a tree, so strong he could throw two highway patrolmen out of a beer joint, and so fearless he could stare down the barrel of a shotgun and take it away from a hothead who threatened his family. But he was also a generous and loyal friend, a loving husband, father, and grandfather who worked fiercely to stave off starvation during the Great Depression, moving his family twenty-one times in ten years in the hope of finding better work. Bragg brings his grandfather fully to life, not by turning him into a saint but by revealing his faults—his proclivity for fighting and love of “likker”—as well as all those qualities that brought hundreds of people to his funeral and could still bring tears to the eyes of his family members forty years after his death.

Though not the kind of man often found in history books, Charlie Bundrum was a hero to many, and in Bragg’s gripping narrative he is a representative figure of a vanishing culture, “the last bridge between those old, wild days of the river and this more civilized time” [p. 236]. Although Bragg was never acquainted with his grandfather in life, in Ava’s Man he comes to know the man behind the family myth and gives readers the unique and unforgettable pleasure of knowing him as well.

1) In the prologue, Rick Bragg wonders about his grandfather, “What kind of man was this . . . who is so beloved, so missed, that the mere mention of his death would make [his family] cry forty-two years after he was preached into the sky?” [p. 9] How does the book answer this question? What kind of man is Charlie Bundrum? Why does his memory evoke such powerful emotions in those who knew him?

2) Bragg says that he wrote this story “for a lot of reasons,” one of which was “to give one more glimpse into a vanishing culture” [p. 13]. How does he create a vivid picture of that culture? What does he admire about it? How is it different from “the new South”? What other reasons compelled Bragg to write about a grandfather he never knew?

3) Bragg says that Charlie Bundrum was “blessed with that beautiful, selective morality that we Southerners are famous for. Even as a boy, he thought people who steal were trash, real trash. . . . Yet he saw absolutely nothing wrong with downing a full pint of likker . . . before engaging in a fistfight that sometimes required hospitalization” [p. 53]. What kind of moral code does Charlie live by? Are his frequent acts of violence justifiable? In what sense can Charlie be called a hero?

4) Charlie is a man of great physical strength and courage, but what instances of kindness, generosity, and caring balance the violence and recklessness in his life? How does the inclusion of this kind of behavior in Bragg’s description create a richer and fuller portrait of the man?

5) In speaking of his grandfather’s legacy, Bragg says, “A man like Charlie Bundrum doesn’t leave much else, not title or property, not even letters in the attic. There’s just stories, all told second- and thirdhand, as long as somebody remembers” [p. 18]. What is the value of preserving the kind of stories that Bragg gathers in Ava’s Man?

6) Ava’s Man is filled with dramatic confrontations and vivid scenes. What episodes stand out the most? What do these episodes reveal about the character of the Bundrum family?

7) In considering his grandfather’s drinking, Bragg writes, “I am not trying to excuse it. He did things that he shouldn’t have. I guess it takes someone who has outlived a mean drunk to appreciate a kind one” [p. 133]. What does this passage suggest about Bragg’s personal stake in reconnecting with his grandfather? What kind of portrait does he paint of his own father in Ava’s Man?

8) Charlie Bundrum “was a man who did the things more civilized men dream they could, who beat one man half to death for throwing a live snake at his son, who shot a large woman with a .410 shotgun when she tried to cut him with a butcher knife, who beat the hell out of two worrisome Georgia highway patrolmen and threw them headfirst out the front door of a beer joint called the Maple on the Hill” [p. 8]. In what ways is Charlie free from the constraints of society? What is the cost of this freedom? Is Bragg right in thinking that Charlie’s way of living is something that more civilized men envy?

9) Bragg writes that Ava could have had her sister Grace’s life, a life of relative wealth and comfort, of fine clothes, good food, and travel, instead of a life of rented houses, poverty, and hard labor in the cotton fields. “She could have hated her life,” Bragg admits [p. 153]. Why doesn’t she? What does Charlie give her that other men cannot? What kind of woman is she?

10) Why does Charlie take in Hootie? What does this reveal about his character? What does Hootie bring out in Charlie?

11) Bragg writes that Charlie “could charm a bird off a wire” [p. 45]. What are the charms of Bragg’s own storytelling style? Where else does he use colorful similes? In what ways is his narrative voice perfectly suited to his subject matter?

12) What does Ava’s Man reveal about how the Great Depression affected people in the Deep South, especially those who lived in the foothills? How did it affect the Bundrums specifically? How are they treated by landlords, sheriffs, and others in positions of power?

13) For centuries, recorded history has largely been the account of those who have had the greatest impact on world events. Why is the history of a man like Charlie Bundrum important? In what ways does it offer a door into American history and culture that more conventional histories cannot provide?

14) In the epilogue, Bragg argues that when compared with the new South, Charlie Bundrum seems larger than life, because of “his complete lack of shame. He was not ashamed of his clothes, his speech, his life. He not only thrived, he gloried in it” [p. 248]. What accounts for Charlie’s pride? Why is Bragg so proud of him? What does Ava’s Man suggest about the way in which inner character is more important than external circumstances?

Rick Bragg is the bestselling author of All Over but the Shoutin’ and Somebody Told Me. A national correspondent for The New York Times, he was awarded the Pulitzer Prize for feature writing in 1996. He lives in New Orleans.

In a Sunburned Country

Andrew Carnegie
Back to Top