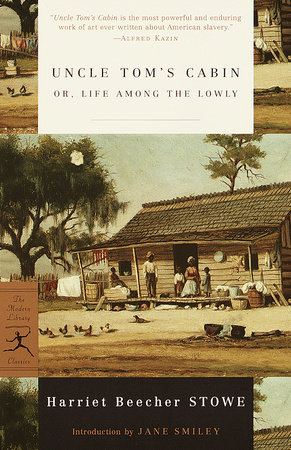 1. Charles Dudley Warner wrote in an 1896 essay (see Commentary section, above) that "Distinguished as the novel is by its character-drawing and its pathos, I doubt if it would have captivated the world without its humor." What is the role of humor in Uncle Tom’s Cabin?

2. Given that the cabin is featured only briefly in the novel, why do you think the book is called Uncle Tom’s Cabin?

3. Uncle Tom’s Cabin draws on modes, such as the jeremiad,
allegory, and prophecy, that were commonly used by New England writers in the nineteenth century whose literary predecessors were eighteenth-century theologians and preachers (for example, Cotton Mather and Jonathan Edwards). How do these elements function in the novel? What role do the Bible and biblical allusion play (there are at least seventy allusions to, or quotations from, the Bible in the novel)?

4. What is the purpose of the two plots (the story of Uncle Tom, on the one hand, and that of the Harrises, on the other)?

5. What is the significance of the repetition of names (e.g., there are two Toms, two Georges, two Henrys [Henrique and Harry])?

6. Ever since the publication of Uncle Tom’s Cabin, critics have debated whether its sentimentality undermines its abolitionist purpose. James Baldwin, for example, in a famous essay called "Everybody’s Protest Novel" (see Commentary section, above), argued that "Uncle Tom’s Cabin is a very bad novel, having, in its self-righteous, virtuous sentimentality, much in common with Little Women. Sentimentality, the ostentatious parading of excessive or spurious emotion, is the mark of dishonesty, the inability to feel; the wet eyes of the sentimentalist betray his aversion to experience, his fear of life, his arid heart, and it is always, therefore, the signal of secret and violent inhumanity, the mask of cruelty." Kenneth Lynn, on the other hand, claims that "Uncle Tom’s Cabin is the greatest tear-jerker of them all, but it is a tear-jerker with a difference: it did not permit its audience to escape reality. Instead the novel’s sentimentalism continually calls attention to the monstrous actuality which existed under the very noses of its readers. Mrs. Stowe aroused emotions not for emotion’s sake alone-as the sentimental novelists notoriously did-but in order to facilitate the moral regeneration of an entire nation." Which side do you take in this debate?

7. A related question concerns the artistic merit of the novel, with one side arguing that while Uncle Tom’s Cabin was historically and politically significant, it is not a literary masterpiece (owing, among other things, to its sentimentality), and the other side claiming that it is aesthetically valuable (so James Russell Lowell wrote in 1859, "It was so easy to account for the unexampled popularity of ‘Uncle Tom’ by attributing to it a cheap sympathy with sentimental philanthropy" but, he continues, "we had the advantage of reading that extraordinary book in Europe, long after the whirl of excitement produced by its publication had subsided, and with a judgement undisturbed by those political sympathies which it is impossible, perhaps unwise, to avoid at home. We felt then, and we believe now, that the secret of Mrs. Stowe’s power lay in that same genius by which the great successes in creative literature have always been achieved-the genius that instinctively goes to the organic elements of human nature, whether under a white skin or a black, and which disregards as trivial the conventions and factitious notions which make so large a part both of our thinking and feeling"). Do you think the novel is a successful work of art or not?

The Winter of Our Discontent
John Steinbeck

The Call of the Wild, White Fang, and Other Stories
Jack London

To a God Unknown
John Steinbeck

Cane
Jean Toomer
Back to Top