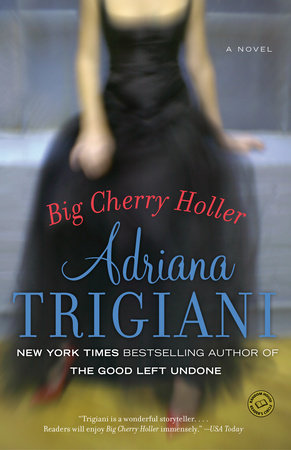 1. Big Cherry Holler is a sequel to the bestselling Big Stone
Gap. Does it help to read Big Stone Gap before delving
into Big Cherry Holler? How did the author structure this
book as a stand-alone novel, and how does it function as
a continuation of the first book?

2. What is the significance of the title Big Cherry Holler,
both literally and figuratively?

3. When the book opens, Ave Maria and Jack Mac have been
married for eight years. How have her attitudes about herself
and about relationships changed during that time?
How has she remained a "spinster" in spirit?

4. Early in the book, it’s disclosed that Jack and Ave’s son,
Joe, died after a sudden illness. In what ways do Jack and
Ave deal with his death, both separately and together?
How does their marriage bear the scars of their son’s untimely
death?

5. What role does small-town life–both in Italy and in Big
Stone Gap–play in Ave’s life? How do the mammoth
physical attributes of the outside world play against her
life?

6. Ave Maria sees Jack Mac chatting with a tanned, blond
woman named Karen Bell, and immediately feels anxious.
What evidence of marital estrangement accumulates after
that incident? What aspects of Karen’s personality do you
think would appeal to Jack Mac?

7. How does Ave Maria see Karen Bell as a rival, and in
which ways does she feel superior to her? Which feeling
ultimately proves more accurate?

8. Were you surprised by the revelation of Theodore’s homosexuality?
Which clues–both in this book and in Big
Stone Gap–are provided before his confession? How do
you think this will affect his relationship with Ave?

9. When Ave’s protege, Pearl, pleads with Ave to become a
partner in the pharmacy, she signs on without consulting
Jack Mac (much to his chagrin). What other decisions in
her life does Ave keep to herself? Is Jack justified in his
anger, or does he, too, keep some aspects of his life private?
Which ones?

10. Ave’s daughter, Etta, is a main character in the book. Ave
describes her as "wide open, and yet very private." What
parallels can you draw between Ave and Etta, and how
are the two characters different? How is Etta a product
of Jack Mac’s influence? How does she cope with her
brother’s death?

11. How do the women of Big Stone Gap–Fleeta, Pearl, Iva
Lou–function as a sort of Greek chorus for Ave? How
does Ave affect each of their lives, and how do they,
in turn, influence hers? How has each woman evolved
throughout the two books?

12. The reader sees Ave Maria in a brand-new environment
when she travels to Italy. Which facets of her personality
come to the forefront? To what factors do you attribute
this change in attitude and appearance?

13. While in Italy, Ave imagines what her life would have been
like had her mother not married Fred Mulligan. How do
you envision Ave’s life if she had grown up in Italy? Would
it have been more or less fulfilling?

14. Ave’s haircut spurs an absolute transformation. In which
other ways does her appearance play a role throughout
the book? Of which other novels is this reminiscent?

15. What does Pete represent to Ave, both literally and figuratively?
How does he reawaken passion in her?

16. Theodore dismisses Ave’s assertion that she didn’t really
have an affair with Pete. How is this juxtaposition of
"word vs. deed" a recurrent motif in the book? What examples
can you find in the behavior of Ave, Jack Mac, and
their friends?

17. When Jack Mac and Ave have their confrontation about
Karen Bell, Ave admits that she wanted him to "take her
pain away." Besides Joe’s death, what other issues has Ave
Maria grappled with throughout her life? How has she
usually dealt with any pain she has suffered?

18. Do you believe that Jack Mac consummated his affair
with Karen Bell? What evidence do you have for that
conclusion?

19. Jack Mac tells Ave, "I truly believed in us, and you never
did." What actions echo Jack Mac’s assertion? How does
Jack Mac demonstrate his love for Ave?

20. At the end of Aunt Alice’s life, Ave makes an effort to reconcile
with her. To what do you attribute this change of
heart? How does Ave’s relationship with Alice compare to
the one she enjoys with her "Eye-talian" relatives?

21. What significance do you derive from the fact that Jack
Mac and Pete get along immediately? What does Pete’s appearance
in Big Stone Gap, as promised, indicate about his
character? How is he similar to Jack Mac, and how is he
different?

22. Do you feel that this book is a lead-up to Etta’s stand-alone
story? How do you envision Etta’s adolescence and
adulthood?

23. Adriana Trigiani, the book’s author, also is an accomplished
playwright. How does this novel have the feel of a
play–whether through Trigiani’s use of dialogue, setting,
conflict, or any other literary device?

Learn More About Big Cherry Holler
print
Back to Top