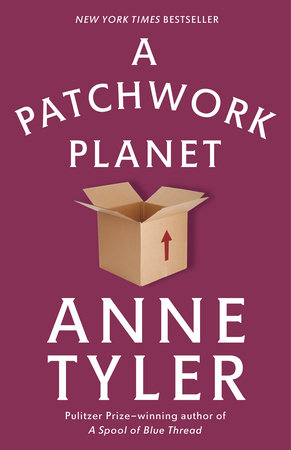 "Set A Patchwork Planet on top of your…reading list and visit it as fast as you can….Gracefully written…intensely satisfying."
—Austin, TX Chronicle

"A Patchwork Planet makes the tender promise that you need not pay all your life for the mistakes you make when you are young. This is vintage Tyler."
—Chicago Tribune

"If this novel were a painting it could be called Portrait of America. Anne Tyler writes it like a great landscape artist….[A]ttention to detail combines with brilliant chiaroscuro to produce a modern classic. The picture is so rich and original that it will be revisited again and again."
—London Times

"Tyler’s books get wiser, funnier and richer as they go."
—Seattle Times

"She [Tyler] tells stories using sharp, yet delicate, observations and draws her characters as tender, funny–and flawed–souls….In her characteristic style, Tyler dredges up delightful, heartbreaking revelations about misguided, earthbound souls who puzzle over the differences between fantasy and reality, longing and resignation, expectation and inevitability."
—Charleston, S.C. Post and Courier

"Like all worthwhile literature, [Tyler’s] novels push a reader to confront the fluidity of his or her own character, to encourage a kinship with an idiosyncratic soul with whom one would otherwise never dream a connection."
—Washington Post Book World

"Though ‘wise and funny’ is usually dust jacket-speak for sentimental and corny, this gentle comedy restores meaning to those hackneyed terms. The novel is wise and funny, in the old-fashioned, pre-recovery-era sense. It also has one of the most appealing young male narrators since Holden Caulfield."
—New York Daily News

"Tyler dissects with precision and tenderness the ordinary and the quirky."
—Philadelphia Inquirer

"Her elegant, accessible prose draws us again and again into the Baltimore world she knows so well….This is a writer who knows, above all, how to draw characters…that you can’t help but care about."
—Washington Times

"Anne Tyler…returns for her 14th novel with a book as good as any of her best….More than any other contemporary novelist, Tyler understands that chance encounters, misunderstandings and sheer luck are the true architects of our lives."
—Fresno, CA Bee

"Both comic and tragic, A Patchwork Planet explores how people interact with their families, as they fall in love and as they age. Although luck is never on Barnaby’s side, you’ll find yourself rooting for him in spite of his mishaps and inspired by his simple but astute observations about human nature."
—Redbook

"At the center of this novel is the story of a young man’s romance and his shucking off an old skin that no longer fits, but Tyler also has a lot to say about marriage, aging, death, and the perception of time….Among the distinctive features of Tyler’s novels are the profound observations and flashes of insight that pop out of commonplace events."
—The San Diego Union-Tribune

1.         "I am a man you can trust." Barnaby begins and ends the novel with this statement. How has Barnaby’s understanding of this characterization of himself changed over the course of this story?

2.         "Just because we were related didn’t mean we were any good at understanding each other," says Barnaby after yet another frustrating conversation with his mother. Communication problems abound within the families depicted in this novel. Discuss the nature and source of these problems. Why do we often have so much trouble talking to the people we love?

3.         Even as adults, many of us, like Barnaby, still view our families through the eyes of a child. How does this blind us? How do we heal the old wounds? Can we?

4.         During a family dinner for his birthday, Barnaby asks himself, "How come I always got the feeling that somebody was missing from our family table?" What do you think Barnaby was missing? And why is his mother so insistent upon including his childhood friend, Len Parrish, in the festivities?

6.         Barnaby’s daughter is upset upon meeting some of his clients, and Barnaby is criticized for this. Do you think he was wrong to bring Opal with him on his rounds?

7.         While Barnaby tells us a great deal about his marriage to Natalie, we learn little about her views of things. How do you think Natalie would describe their relationship, and how would it differ from Barnaby’s account?

8.         "And I was beginning to suspect that it made no difference whether they’d married the right person. Finally, you’re just with who you’re with. You’ve signed on with her, put in half a century with her, grown to know her as well as you know yourself or even better, and she’s become the right person." Discuss the meaning of this summary of marriage according to Barnaby. Do you agree or disagree?

9.         Barnaby’s brief career as a juvenile delinquent involves snooping in other people’s personal effects and "collecting" their personal mementos. What do you think motivated him to do this? Have you ever felt the compulsion to look in other people’s private things? Why or why not?

11.         Barnaby seems surrounded by smug and self-satisfied people–his mother, his ex-wife, his brother, to name a few–who he never seems to measure up to. Barnaby feels much less comfortable in his own skin. Do you think this is a trait only he possesses?

12.         What motivates Barnaby to re-pay his parents, and why does his mother try to give the money back?

13.         This novel explores the bittersweet struggles of older people to maintain their dignity and independence in the face of advancing age. What do you think about the fact that Barnaby knows more about the lives of his clients than many of their own families do? What does this novel suggest about the treatment and place of elderly people in our society?

14.         Barnaby’s clients deal with the indignities and problems associated with aging–e.g., failing health, isolation–in many different ways. How do their approaches vary, and what accounts for this?

16.         Why is Barnaby able to overlook attributes in Sophia that infuriate him in other people for so long? How does his attitude change and why?

19.         Why did your group choose to read this particular work? How does this novel compare with other works your group has read?

Anne Tyler was born in Minneapolis in 1941 but grew up in Raleigh, North Carolina. She graduated at nineteen from Duke University, and went on to do graduate work in Russian studies at Columbia University. Her eleventh novel, Breathing Lessons, was awarded the Pulitzer Prize in 1988. She is also the author of If Morning Ever Comes, The Tin Can Tree, A Slipping-Down Life, The Clock Winder, Celestial Navigation, Searching for Caleb, Earthly Possessions, Morgan’s Passing, Dinner at the Homesick Restaurant, The Accidental Tourist, Saint Maybe, and Ladder of Years. Tyler is a member of the American Academy of Arts and Letters. She lives in Baltimore.
Learn More About A Patchwork Planet
print