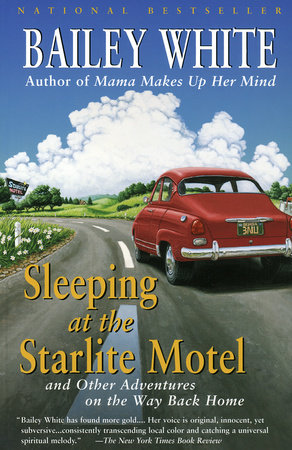 The questions, discussion topics, and author biography that follow are designed to enhance your group’s reading of Bailey White’s Sleeping at the Starlite Motel and Other Adventures on the Way Back Home. We hope they will give you a number of interesting angles from which to look at this sparkling collection of amusing and pentrating sketches.

Bailey White shares her native south Georgia with her readers through a series of unforgettable incidents and characters. There are her cousin Ralph, a model of industrious decorum who goes off on a downward spiral of debauchery after eating an unaccustomed candy bar; her great-aunt Della, who resolutely sells her ancestors’ heirlooms so that she can afford to stay out of the nursing home; and Mrs. Boatwright, a down-to-earth, old-fashioned third-grade teacher who cuts school events to attend the dog races. Bailey White’s world may sometimes seem idyllic and remote, a fantasy of small-town America, but with her expert touch, White imbues it with details so true that we know it to be utterly real and alive. Her unerring instinct for the absurd and the magical makes her milieu seem both fresh and familiar, a place of the imagination that becomes, for a moment, every reader’s home town.

1. Does the past seem more real to White’s characters than it does to members of your own community? If so, to what do you attribute that sense of immediacy? In general, do you believe that in small communities, where people often remember their neighbors’ parents and grandparents, the past tends to be more palpable? (White has said of her family members that "even when they die they’re hardly dead, because we talk about them as if they were still alive" Fort Piers Florida Tribune, 6/25/95]).

2. An old-fashioned class system is still very much alive in the American South that White writes about. How would you describe this system? How are feelings about class demonstrated in "Family Values" and "The Chairs"? How, if at all, does the possession or non-possession of money enter into this scheme?

3. Bailey White’s world is not a static one but one observed at a moment of transition. With what clues does she let us see the changes that are overtaking her characters and locales? How does White give us a feel for the passing of time, for example in "An Old Lepidopterist" and "One Room Schoolhouse"?

4. While in the larger American culture death has become an enemy to be feared and denied, stories such as "Ashes," "Saltville," and "Styles of Dying" show that there are many other ways of facing the inevitable coming of death. How do various characters in this collection deal with death?

5. The story "Blood and Water" presents us with a fascinating model of family and community responsibility. Does Ralph’s automatic assumption that he is responsible for his elderly aunt strike you as surprising or as natural? When Ralph goes "off his rocker" [p. 55], who feels the ultimate responsibility for him and who deals with the problem? Do you feel that, in general, this family code is still alive in America?

6. What does "Blood and Water" tell us about the way insanity is looked at and dealt with in a place like Thomasville? Are the characters in the story more tolerant of it than people from other types of communities might be? How is eccentricity perceived in White’s world? Does this attitude strike you as peculiarly Southern?

7. How does Mr. Bonzonio’s style of salesmanship conform with Bailey White’s own personality? Does it also conform with the social code of the community as a whole? How might a go-getting, aggressive salesman be perceived in Thomasville?

8. White deals with the subject of old age in stories such as "The Wedding Guest," "A Hot Night in ’31," and "Rocks." Do you find that the lives of the old people in her stories differ from those of the elderly in other parts of the country? How does White deal with the inevitable fact of aging? What does she say about her own mortality in "Spelunking in Middle Age"?

9. In "Folk Art" White looks at the nature of the artistic impulse and, simultaneously, at the religious one. How does the story link the two? Does the modern world, as represented by the teachers’ summer art class, glorify art while at the same time secretly deriding the religious impulse that often inspires it? Does White submit the possibility that religious (though not necessarily Christian) feeling is an intrinsic part of artistic creation? If so, do you agree?

10. Much of White’s work could be classified as a comedy of manners, but she is also deeply affected by the natural world. In stories such as "Fish Camp," "An Old Lepidopterist," "Cumberland Island," "Garden of Eden," and "Large and Deep," what values does she affirm? How does she portray the interaction between man and nature?

11. In "A Matter of Time" White tells the story of an old lady whose collapsing house is "stolen" by an enterprising young man. What moral issues are being presented here and how are they resolved? Since everyone seemed to benefit from the theft, did the young man do the right thing? Does White imply, in this story or in others, that reverence for the past can handicap one’s life in the present? "Career Choices" is one of the few stories in the collection that presents a truly sad vision of White’s community. Nockerd Sockett, a life-giving, ebullient person who fights his way up against terrible odds, is finally defeated. Do you think that this story jars with White’s essentially positive outlook on life? Why do you think that in general she tends to put a positive spin on events?

12. What do Nockerd Sockett and the retired Russian colonel have in common? What particular characteristics make them, in White’s view, ideal human beings? What other characters in the collection share these qualities?

13. In "Horror Movies" we learn that Bailey White’s father moved to California when she was a child. It is clear that she grew up, and continues to live, in a largely female environment. Does this fact explain anything about her outlook, her character, and her feelings about family?

14. White evinces joy in the unexpected– in "Computer School," for example, in which the sensible schoolteacher Mrs. Boatwright acts so freely and spontaneously against type. Where else in the collection can you observe this kind of unconventional behavior? Do you think that White’s role as a teacher has helped to form her view of the world and her sense of humor? If so, how?

15. One of the shortest and most deceptively simple stories in the collection is "Native Air," the description of White’s yearly escape from the Georgia heat and her thankful return to it. How does this circular journey act as a metaphor for life as she sees it, and how does it relate to the other stories in the collection? What importance in our inner life does White assign to places– houses, landscapes, and towns?

Bailey White was born in Thomasville, Georgia in 1950. She is the daughter of a writer, Robb White, III, and a farmer, Rosalie Mason White. She received her B.A. from Florida State University and became a first grade teacher in Thomasville, a job she has held for over twenty years. Bailey White’s first book, a national bestseller, Mama Makes Up Her Mind and Other Dangers of Southern Living, was published in 1993. White’s witty comments on daily life can be heard on National Public Radio’s show “All Things Considered.”
Learn More About Sleeping at the Starlite Motel
print

Thanks for the Money
Joel McHale

The Tenderness of Stones
Marion Fayolle

How Did You Get This Number
Sloane Crosley

I Totally Meant to Do That
Jane Borden

All By My Selves
Jeff Dunham

Will Not Attend
Adam Resnick

Son of a Critch
Mark Critch

Way Off the Road
Bill Geist

Dear Girls Above Me
Charles McDowell

A Buffalo in the House
R. D. Rosen

Half Empty
David Rakoff
Back to Top