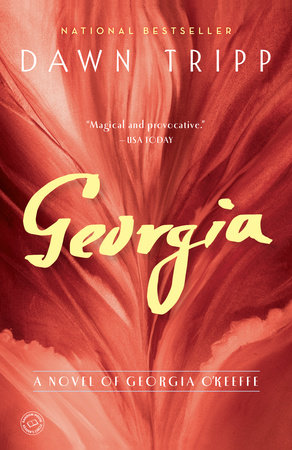 A Conversation with Dawn Tripp

1. Georgia O’Keeffe is a woman many people know of, but her life as a young woman in New York is a chapter that is less well known. How did your understanding of O’Keeffe and her art change as you were reading Georgia?

2. O’Keeffe was a groundbreaking female artist at a time when the art world was dominated by men. O’Keeffe had to navigate this world – of male artists, male critics and gallery owners – to build a successful career without sacrificing her unique artistic vision and her sense of herself as a woman. Discuss some of the challenges O’Keeffe faces in Georgia. Discuss how those challenges as well as the risks she took – as a woman and as an artist – feel relevant to women today.

3. Think about O’Keeffe’s childhood. Do you feel that the lessons she learned growing up shaped her early relationship with Stieglitz and the choices she would make later? Although O’Keeffe’s mother died from tuberculosis a year before O’Keeffe traveled to New York to see her first show at 291, O’Keeffe is haunted by her mother, and by the choices that her mother made. Why were these choices significant, and what was their impact on O’Keeffe?

4. O’Keeffe’s passion for the landscape is a powerful engine for her art. At one point, early in the novel, O’Keeffe thinks to herself that Stieglitz and his faith in her art are “like that open space, vast like these plains, this night, vast enough it seems sometimes to hold me.” Do you agree with this? In what ways is this perception true when O’Keeffe first meets Stieglitz, and in what ways does it change as she matures? Do you feel her experience is one common to women as they evolve and change in the course of their lives?

5. In the opening chapter of the book, O’Keeffe contends: “This is not a love story. If it were, we would have the same story. But he has his, and I have mine.” What do you think O’Keeffe means when she says this? In what ways is Georgia a love story? How does O’Keeffe’s understanding of the word ‘love’ change in the course of the novel?

6. When their relationship was going through a challenging time, O’Keeffe wrote to Stieglitz from New Mexico:
“There is a bond – that is my feeling for you – it is deeper than anything you can do to me –”
What are your first impressions of this statement? Do these words reflect Georgia’s strength and self-awareness? Her commitment to Stieglitz? Or do they reflect something else? How do these words interface with Georgia’s struggle to balance her own needs with the demands of her relationship? How do these words play out in the course of the story?

7. Discuss O’Keeffe’s breakdown. Why do you think she falls apart?

8. Discuss what it means to O’Keeffe when she feels she is unable to paint, and when she says: “This isn’t just him, and what he’s done to me. It’s what I’ve let him do.” Do you agree? Do you believe that every relationship – no matter how passionate or spiritual – is a kind of transaction?

9. Desire is a powerful force for O’Keeffe – artistic desire; desire for place, connection, and solitude; desire between two people. How does O’Keeffe’s relationship to desire change? What does her exchange with Toomer toward the end of the book say about what she has learned? Discuss the ways in which love and desire overlap and diverge. Which is more vital to O’Keeffe? Which do you believe is more vital in your own life?

12. In the final sections of the novel, O’Keeffe becomes the legendary artist we know. What sacrifices does she make as a result? Do you feel these were sacrifices she had to make in order to live and work on her own terms? Do you think those choices are unique to her? In what ways do you feel they are common choices that all women face?

13. If you could have one O’Keeffe painting in your home, which one would it be? Before reading this novel, would you have chosen a different O’Keeffe painting? How has your understanding of O’Keeffe and her art changed as a result of reading Georgia?

14. What do you think it means to be an icon? What did it mean to O’Keeffe during the time she was with Stieglitz? How did her identity and portrayal as an American icon change over the course of her life?

15. O’Keeffe is known for being fiercely independent, and she is often seen as a “foremother of the feminist movement.” O’Keeffe herself, however, publicly eschewed any “–ism,” including feminism. Consider the gender dynamics in Georgia. Do you feel it was the politics of O’Keeffe’s relationship with Stieglitz, her upbringing and the hardship of her young adult life, or her unique creative vision that shaped her resolute unwillingness to be associated with any movement, artistic or otherwise? Why do you feel that was so important to her? Discuss.

The Madonna of the Mountains
Elise Valmorbida

Here We Are
Graham Swift

There Your Heart Lies
Mary Gordon
Back to Top