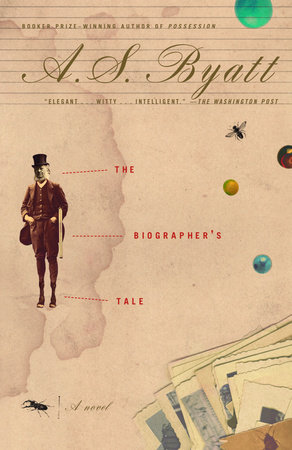 The introduction, discussion questions, suggestions for further reading, and author biography that follow are designed to enhance your group’s reading of A. S. Byatt’s The Biographer’s Tale. With this novel, Byatt again turns to scholars and seekers of the past, to the libraries and intellectual detective work which yielded such richly romantic results in Possession and Angels & Insects.

The Biographer’s Tale is the story of Phineas G. Nanson, a disenchanted graduate student who, yearning for reality, decides to abandon his arcane studies in postmodern literary theory and write a biography, for what could be more concrete than a biography, the "art of things, of arranged facts"? As he follows the traces of his subject, the biographer Scholes Destry-Scholes, Phineas finds that the facts of Destry-Scholes’s life prove to be elusive. Scholes Destry-Scholes’s niece has found a box of her uncle’s papers and note cards, which seem to be pieces of a project on three historical figures: the taxonomer Carl Linnaeus, the statistician and eugenicist Francis Galton, and the dramatist Henrik Ibsen. But these fragments of Destry-Scholes’s works in progress turn out to be a pastiche of fact and fiction, with fantastic elements written in by the supposedly scrupulous seeker after truth, Destry-Scholes himself.

In the meantime, Phineas has taken a job working at Puck’s Girdle, a travel agency run by a gay couple who caters to a clientele with educated, aesthetic, and otherwise highly specialized tastes. Here Phineas is alarmed by the repeated appearance of Maurice Bossey, who seems to want Phineas to arrange a tour designed to satisfy Bossey’s pedophilic propensities. Back on the track of Destry-Scholes, Phineas becomes involved with Fulla Biefeld, a golden-haired Swedish bee taxonomer, as well as Destry-Scholes’s beautiful niece Vera–and soon finds himself in love, with a plenitude of experiences he never dreamt of in the university’s dusty seminar rooms. He also finds, much to his surprise, that in seeking to write a life of Destry-Scholes he has slipped into writing an autobiography–and that his own life is now his primary interest. For the reader, too, the story of Phineas’s journey from the shadow-life of scholarship into a well-rounded contentment is deeply satisfying.

1. Because of his tiny size, Phineas is an unlikely romantic hero: "I was a little person . . . I have never felt anything other than pleasure in my small, delicate frame. Its only disadvantage is the number of cushions I need to see over the dashboard when driving" [p. 6]. Is Phineas meant to be a comic character? Is he more suited to the role of scholar than that of lover?

2. Phineas decides to stop pursuing his work as a postmodern literary theorist a week after his mother’s funeral. Elsewhere he mentions, in an offhand way, his father’s "disappearance" [p. 6]. Thus as the story opens, Phineas has just become an orphan, a person with no attachments. Why are his parents not referred to at greater length as he tells his story? How does Phineas compare with other orphaned protagonists of autobiographical fiction, like Pip of Dickens’s Great Expectations, or David Copperfield in the novel of the same name? Why is it relevant to his self-creation that he is an orphan?

3. On page 45, Phineas begins to read through the full text of "the three documents" written by Destry-Scholes. Byatt has chosen to make the reader of the novel mirror Phineas’s reading, and thus the reader, too, performs an act of scholarship for the next sixty-six pages. Why is it necessary to read through the three documents in order to come to an understanding with Phineas of his own conclusions about Destry-Scholes and hence, about the meaning of his own undertaking? Why does Byatt want the reader to track Phineas’s reading, and what does this decision suggest about her expectations of her readers?

4. Ormerod Goode says, "The richness, the surprise, the shining solidity of a world full of facts. Every established fact–taking its place in a constellation of glittering facts like planets in an empty heaven, declaring here is matter, and there is vacancy–every established fact illuminates the world" [p. 7]. Are facts a cure for life’s uncertainties? Does Phineas get to work with facts at all? Does Byatt imply that facts pertain only in the realm of science? Which characters in the novel deal most directly with facts?

5. As in her previous novels, Byatt takes extravagant delight in the naming of her characters. What ideas, images, or connotations are attached to the names of Phineas G. Nanson, Vera Alphage, Fulla Biefeld, Maurice Bossey, Scholes Destry-Scholes, Elmer Bole? Are names accurate signifiers of character?

7. In a recent interview Byatt said, "The more I have read, and the more I have written, the more I have come to understand that Coleridge was right when he said that the purpose of art was pleasure first, and everything else added." She added, "I do know that thinking and understanding are also almost always a form of pleasure." The intellectual puzzles that occupy Phineas may raise difficulties for some readers, but clearly Byatt intends that working through the puzzle to be pleasurable. Do the personal and scholarly parts of Phineas’s life make up two different but interrelated kinds of pleasure for the reader?

8. Why are the professional specialties of Vera and Fulla relevant to the novel? Is Byatt contrasting science and literature? Are the sciences ultimately more useful, more clearly purposeful, than the humanities? How does Fulla’s concern with global biodiversity, for instance, relate to Phineas’s effort to write a biography of a biographer?

9. The novel’s title plays with ideas about biography (which as Phineas points out, is a branch of history) and the telling of tales (fiction writing). Byatt is writing a novel, and Phineas discovers that, while trying to write a biography, he has written an autobiography. He also discovers that Destry-Scholes has mingled fictions with his facts. Does Byatt imply that the boundary between fiction and nonfiction is fluid? Can any biography claim to be accurate and entirely truthful?

10. Why is there a strong dichotomy between the two women Phineas loves? Vera is associated with the moon, the sea, cool colors, and glass, Fulla with the sun, fertility, pollen, and fields. Why has Byatt chosen to give Phineas not one but two lovers? How does this element of Phineas’s story relate to Elmer Bole’s red and green apples? Why does Byatt not make Phineas choose between them, even as the novel closes?

11. What is interesting in the fragments Byatt has written on the three historical figures Linnaeus, Galton, and Ibsen? What are the thematic connections between the three documents? How does Byatt’s interest in pastiche relate to Galton’s interest in the composite photograph?

12. How do Destry-Scholes’s notes on "The Art of Biography" [pp. 31<ETH>34] reflect the troubling nature of working with "facts"? Is Destry-Scholes’s entry into fictionalization a natural response to the frustrations of encountering gaps in knowledge? Does the novel imply that, through the act of supplementing the facts, the imagination can make things more interesting than the truth could ever be?

13. Ormerod Goode tells Phineas that Destry-Scholes vanished on a visit to the Maelstrom, in Norway, where "an empty boat was found, floating" [p. 28]. Is there any indication of why Destry-Scholes might have wanted to end his life? Or is his disappearance the most fitting image for the mystery that he represents, and of the scholarly dead end that Phineas has to face?

14. "Plaisir, consommation, jouissance. Glee" [p. 5]. Thinking of these words so central to the work of French literary theorists, Phineas walks down the hall with Ormerod Goode, toward his new life as a seeker of facts. Phineas is an expert on the concepts indicated by these words (roughly translated as sexual pleasure, consummation, and delight), but he experiences their non-theoretical meanings–their actuality–only through his love for Vera and Fulla. This seems to be an irony that Byatt intended as she constructed the beginning of her novel. Is the movement from theoretical pleasure to real pleasure just what Phineas has wished for himself? And has Byatt created, in this sense, a story with a deeply satisfying outcome, fulfilling also the reader’s desire for the hero’s happiness?

A. S. Byatt was born in Yorkshire, England, in 1936. Her novels include Possession (winner of the Booker Prize in 1990) and the sequence The Virgin in the Garden, Still Life, and Babel Tower. She has also written two novellas, published together as Angels & Insects, and four collections of shorter works, including The Matisse Stories and The Djinn in the Nightingale’s Eye. Her nonfiction works include a book on the nineteenth century, Unruly Times: Wordsworth and Coleridge in Their Time, a collection of essays and book reviews, Passions of the Mind, a book on the novelist Iris Murdoch, and, with Ignes Sodre, Imagining Characters. Educated at Cambridge, she was a senior lecturer in English at University College, London, before becoming a full-time writer in 1983. She lives in London.
Learn More About The Biographer’s Tale
print

Talking It Over
Julian Barnes

The Clothes They Stood Up In
Alan Bennett

A Fairly Honourable Defeat
Iris Murdoch
Back to Top