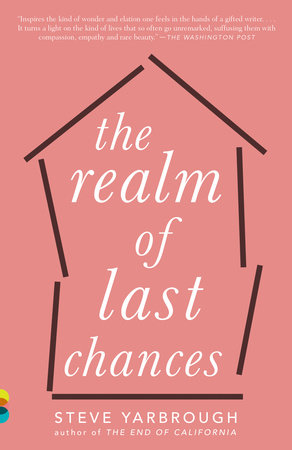 The introduction, discussion questions, and suggested reading list are designed to enhance your group’s discussion of The Realm of Last Chances, Steve Yarbrough’s searing story of adultery and academic fraud set in a small New England town.

The novel begins in the shadow of an economic recession that has left each of its main characters with muted ambitions and reduced circumstances. Kristin Stevens, having lost her administrative position at the University of California, moves to Massachusetts with her husband, Cal. She takes an administrative position at a third-rate college, where standards are nonexistent and academic politics rampant. Soon after she settles into her new job, a case of plagiarism is brought to her attention. Two professors in the history department have lifted passages from the works of other scholars and presented them as their own. It seems clear-cut, but one of the professors, Robert Dilson-Alvarez, is the pet of the provost, who is a woman who does not suffer contradiction lightly. Kristin has a scandal on her hands. If she ignores it, she risks negligence; if she takes action, she risks losing her job. But this is hardly her most pressing problem.

After fifteen years, she and Cal have become strangers to each other, increasingly disengaged sexually and emotionally. Cal is a sensitive and talented musician, though he lacks any professional ambition. In California he worked as a skilled craftsman, but he is now content to fix up their house and sink into alienated isolation.

When Kristin calls on her younger neighbor Matt to help with a flooded basement, the two begin an unlikely and extremely dangerous affair. Matt is a frustrated writer, divorced, living in relative squalor and now consigned to making sandwiches at the local deli after being fired from the Harvard Book Emporium for skimming from the cash register. But Cal is a man with a frightening capacity for violence. One day he stumbles into a robbery at a convenience store and beats the thief nearly to death. And when he learns that his wife is involved with Matt, he intends to do something about it.

As the novel races to its dramatic, startling conclusion, Cal, Kristin, and Matt are pulled down into a vortex that has the potential to destroy them all.

But The Realm of Last Chances is much more than a story about adultery. It is, in the larger sense, a complex exploration of the troubling human propensity for deceit and dishonesty. Deception permeates the novel. Cal’s father was a real estate developer who used shoddy building practices to swindle his clients. Cal himself lies to Kristin about his name, his father, his past. Kristin’s own father committed adultery with one of her mother’s best friends, just as she now finds herself doing with Matt, who had stolen from his former employer. Dilson-Alvarez is a plagiarist, but the provost prefers to look the other way. These all-too-human characters present a fascinating spectrum of deceitful behavior, and Yarbrough’s novel powerfully depicts how people respond—under the pressure of loneliness, dislocation and disconnection—when they are brought to the realm of last chances.

1. Soon after they arrive in Massachusetts, Kristin observes her husband sleeping and reflects that “she thought she knew how large his hand was, but for an instant it looked as garish as a flesh-colored fielder’s glove. That it could once have been the source of pleasure seemed impossible” (p. 11).  In what ways do Kristin and Cal not know each other? Why is their marriage poised for a catastrophe? Is there a hint of violence in the description of Cal’s hand?

2. Why does Kristin have an affair with Matt? Is she motivated more by unhappiness in her marriage or by something Matt can give her that her husband can’t, or won’t?

3. How has Cal been shaped by his relationship with his father? Why does he despise him so intensely?

4. More generally, what role does family history play in the novel?

5.  In what ways are Kristin, Cal, and Matt each struggling with a sense of failure and feelings of loneliness and isolation? How do these feelings drive them to act?

6. Why does Cal beat up the petty criminal so brutally when breaking up the robbery in the convenience store? And does this violent episode cast a sense of menace over the rest of the novel?

7. The Realm of Last Chances gives readers an inside look at academia, warts and all.  What are the most disillusioning aspects of this life as portrayed in the novel?

8. Why does Cal open up to Dave’s wife, Gloria, about nearly killing his girlfriend’s father  when he was a teenager? What effect does this confession have on Cal? What might have happened if he hadn’t been able to confide in her?

9. What makes Cal such a complex character? What are some of his most incongruous traits?

10. At their final meeting, Matt tells Kristin: “There’s a lot I don’t know about you. But I’m going to figure it out. Everything you never got around to telling me? I’ll be down the street imagining it. You’ll see the light on in my window, and you’ll know that’s what I’m up to. I’ll be imagining you. In fact, I’ve already started” [p. 265]. Instead of getting Kristin, Matt gets to imagine her. Losing her has launched the novel he’s wanted to write for years. Is this a better outcome for him?

11. Matt steals from his employer, Dilson-Alvarez commits academic fraud, Kristin cheats on her husband, Cal lies about his past, and his father swindles his clients. What is the significance of all these acts of deceit? Are there important ethical differences between them, or are they essentially the same? And what picture of human nature does this present?

12. Discussing the trend toward jargon and obfuscation in academic discourse, the chair of the history department tells Kristen: “I’m an old-fashioned proponent of event-based history who clings to the simple-minded notion that what’s most interesting is a well-told story” [p. 180]. In what ways does The Realm of Last Chances itself demonstrate the importance of personal history and the power of a well-told story?

13. The provost, Joanne Bedard, seems to be an ill-tempered, cynical and self-serving administrator, and Kristen’s secretary, Donna, seems brusque, hardened and one-dimensional. How do your impressions of these women soften and deepen by the book’s end, as more is revealed about them? Why is this process both surprising and satisfying?

14. In what ways can The Realm of Last Chances be read as a critique of contemporary America?

15. What has brought Kristin, Cal, and Matt into the realm of last chances, “where the ice is thin and apt to break and caution is no currency” [p. 153]? What do each of them make of the last chances they’re offered?

16. In the novel’s beautiful final paragraph, Kristin lets images from her distant and recent past “burn like embers” in her mind. What might Yarborough be suggesting by ending the novel with this?

Born in Indianola, Mississippi, Steve Yarbrough is the author of five previous novels and three collections of stories. He teaches at Emerson College and lives with his wife in Stoneham, Massachusetts.

Where Women Are Kings
Christie Watson

Eastman Was Here
Alex Gilvarry
Back to Top