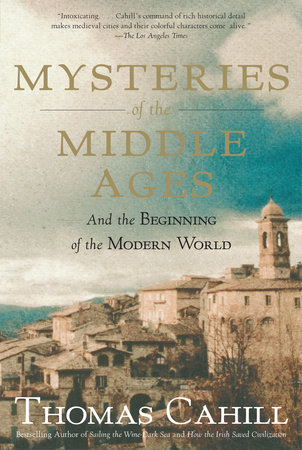 The introduction, discussion questions, and suggestions for further reading that follow are designed to enrich your discussion of Thomas Cahill’s Mysteries of the Middle Ages.

It’s been more than a decade since the tremendously successful publication of How the Irish Saved Civilization, the first book in Thomas Cahill’s illuminating series. Mysteries of the Middle Ages owes much to that volume on medieval Irish history, in many ways picking up where the other left off. Mysteries of the Middle Ages is a rollicking tour of the High Middle Ages, the 12th, 13th, and early 14th centuries. By this time, European barbarians have settled down and become shopkeepers and tradesmen, ladies and knights, nuns and monks. Though the elegant yet brutal world of classical Greek and Roman civilizations is long gone, many of the best insights of classical times were being recovered in the manuscripts so lovingly preserved by Irish scribes and others. Despite stereotypes to the contrary, this was a time of renewal and discovery. Each chapter opens another door to this strange but exciting medieval world, and through these doors we come in intimate contact with people who lived eight centuries ago. We share their hope and joys, their terrors and sorrows, their jokes. We ride with Chaucer’s pilgrims from London to Canterbury. We make music with the nuns of Bingen, plot with Eleanor, set up the first scientific lab at Oxford with Roger Bacon, have visions with Francis of Assisi, and roam through medieval Paris with doomed lovers. With each destination, we experience intriguing revelations and a wonderful journey through time.

1. Why did future generations characterize the Middle Ages as a time of destruction and ignorance? Who was served by that depiction? Which progressive aspects of this period were the most surprising to you?

2. The author attributes the rise of powerful women during the Middle Ages to the Madonna’s central place in religious culture. How did perceptions of the Madonna shape the notion of the ideal woman during this era?

3. What similarities exist between the ways Hildegard of Bingen and Eleanor of Aquitaine used their power? How did the politics of church and state mirror one another during the Middle Ages?

4. What was Hildegard’s guiding premise in her written exchanges with authority figures in the Church? How did her mystical visions seem to affect her tenacity? How would modern-day Roman Catholicism respond to a nun like her, or to an unconventional believer like Francis of Assisi?

5. How might European history have unfolded if Eleanor had ruled, rather than Henry (and later, Richard)? Would she have created an atmosphere of greater or less political stability?

6. What does the story of Abelard and Héloïse indicate about the changing concept of love during the Middle Ages? How does this couple compare to the ideals of courtly love also flourishing at the time? Were Héloïse’s views on marriage realistic or idealistic?

7. What contemporary fallout does the West experience today as a result of the Crusades? Why was Francis of Assisi’s approach to diplomacy-to sail to Egypt and meet with the Sultan al-Kamil in person-both rare and futile during the Middle Ages?

8. How was Francis able to find so much universal beauty in the world, as evidenced in “The Canticle of the Creatures,” while nature was dealing his health such horrific blows? How did humanity’s understanding of the natural world change during his lifetime?

9. How would you characterize the scientific inquiries spurred by figures such as Roger Bacon? What can be learned from Thomas Aquinas’s attempts to reconcile mystery and reason, or faith and facts? In what way do the intellectual pursuits of the Middle Ages speak to twenty-first-century quests for knowledge?

11. What were your reactions to the book’s numerous photographs of medieval art and architecture? Do the artists and artisans seem to share a common definition of beauty?

12. What do Dante’s poetry and life story tell us about the medieval understanding of God? What did Dante himself try to tell us about earthly concerns versus eternal ones, and the quest for peace?

13. What do the book’s maps demonstrate about the role of land in the power struggles of the Middle Ages? On a smaller scale, which regions were more culturally permissive (did communities flourishing along the Rhine differ from those along the Seine)? What are the contemporary effects of these geographic shifts occurring centuries before?

14. The intermezzo, “Entrances to Other Worlds,” provides a portrait of an early form of globalization. In what ways did religion and commerce intersect at that time? Were there any secular realms in business then?

15. Mysteries of the Middle Ages begins and ends with reflections on classical civilization. How did medieval societies respond to these legacies? From the death penalty (see the author’s note regarding Dominique Jerome Green in the book’s introduction) to the church scandals described in the postlude, how does the twenty-first-century world respond to the legacies of the Middle Ages?

Thomas Cahill’s appealing approach to distant history has won the attention of millions of readers in North America and beyond. Cahill is the author of four previous volumes in the Hinges of History series: How the Irish Saved Civilization, The Gifts of the Jews, Desire of the Everlasting Hills, and Sailing the Wine-Dark Sea. They have been bestsellers, not only in the United States but also in countries ranging from Italy to Brazil. He and his wife, Susan, also a writer, divide their time between New York and Rome.

The Pursuit of Glory
Tim Blanning

The History of the Church
Eusebius

An Empire on the Edge
Nick Bunker

The Book of the Courtesans
Susan Griffin

The Life and Passion of William of Norwich
Thomas Of Monmouth

The Forge of Christendom
Tom Holland

An Imperial Possession
David Mattingly
Back to Top