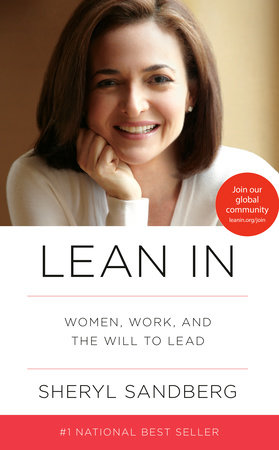 The questions, discussion topics, and reading list that follow are intended to enhance your reading group’s discussion of Lean In: Women, Work, and the Will to Lead, by Facebook COO Sheryl Sandberg.

Sheryl Sandberg—Facebook COO, ranked eighth on Fortune’s list of the 50 Most Powerful Women in Business—has become one of America’s most galvanizing leaders, and an icon for millions of women juggling work and family. In Lean In, she urges women to take risks and seek new challenges, to find work that they love, and to remain passionately engaged with that work at the highest levels throughout their lives.

Lean In—Sheryl Sandberg’s provocative, inspiring book about women and power—grew out of an electrifying TEDTalk she gave in 2010 in which she expressed her concern that progress for women in achieving major leadership positions had stalled. The talk became a phenomenon and has since been viewed nearly two million times. In Lean In, she fuses humorous personal anecdotes, singular lessons on confidence and leadership, and practical advice for women based on research, data, her own experiences, and the experiences of other women of all ages. Sandberg has an uncanny gift for cutting through layers of ambiguity that surround employed women, and in Lean In she grapples, piercingly, with the great questions of modern life. Her message to women is overwhelmingly positive. She is a trailblazing model for the ideas she so passionately espouses, and she’s on the pulse of a topic that has never been more relevant.

1. What does “lean in” mean? Why do you think women need to be urged to lean in?

2. The first three words in the book are “I got pregnant.” What does this signal about the kind of business book Lean In will be?

3. When Sandberg says, “The promise of equality is not the same as true equality” (p. 7), what does she mean? Have you found this statement to be accurate?

5. In chapter 2, Sandberg discusses the impostor syndrome: feeling like a fraud, fearing discovery with each success. Why do women feel this way more often than men do? What causes the gender gap?

6. Sandberg believes that there are times when you can reach for opportunities even if you are not sure you are quite ready to take them on—and then learn by doing.  Have you ever tried this?  What have you tried?  What was the result?

7. What did you learn from the anecdote on page 36, about keeping your hand up?

8. Why did Sandberg respond so negatively to being named the fifth most powerful woman in the world?

9. When negotiating, Sandberg tells women to use the word “we” rather than “I.” Why does the choice of pronoun make such a difference?

10. On page 48, Sandberg says, “I understand the paradox of advising women to change the world by adhering to biased rules and expectations.” How do you feel about her advice?

11. What’s your take on Sandberg’s suggestion that we think of the path to a satisfying career as a jungle gym rather than a ladder?

12. Sandberg argues that taking risks can be important in building a career.  How have you approached risk-taking in your life?

13. Sandberg argues that mentorship relationships rarely happen from asking strangers to mentor you, but rather from an opportunity to engage with someone in a more substantive way.  How has mentorship worked in your own experience?

14. People who believe that they speak “the truth” and not “their truth” can be very silencing of others, Sandberg says on page 79. What does she mean by this?

15. When considering employment after motherhood, Sandberg suggests that women shift the calculations and measure the current cost of child care against their salary ten years from now. Why is this a more effective perspective than just considering current costs? If you’re a parent, would this change your attitude toward employment and money?

16. In chapter 9, Sandberg blasts the myth of “having it all,” or even “doing it all,” and points to a poster on the wall at Facebook as a good motto: “Done is better than perfect.” (p. 125) What perfectionist attitudes have you dropped in order to find contentment?

17. Sandberg and her husband have different viewpoints about parenting: She worries about taking too much time away from their kids, while he’s proud of the time he does spend with them. Would it help women to adopt an attitude more like his?

18. In chapter 10, Sandberg discusses how the term “feminist” has taken on negative connotations. Do you consider yourself a feminist? Why?

19. Discuss this assertion: “Staying quiet and fitting in may have been all the first generations of women who entered corporate America could do; in some cases, it might still be the safest path. But this strategy is not paying off for women as a group. Instead, we need to speak out, identify the barriers that are holding women back, and find solutions” (pp. 146–47).

20. In the book’s final chapter, Sandberg talks about the need to work together to create equality—to allow women to thrive in the workplace, and to allow men to participate proudly in the home and child rearing. What steps can you take right now to begin to make this happen?

Long before Sheryl Sandberg left Google to join Facebook as its chief operating officer in 2008, she was a fan. Today she manages Facebook’s sales, marketing, business development, human resources, public policy, and communications. It’s a massive job, but one well suited to Sandberg, who not only built and managed Google’s successful online sales and operations program but also served as an economist for the World Bank and chief of staff at the U.S. Treasury Department.

Nice Girls Don’t Get the Corner Office by Lois P. Frankel; I Shouldn’t Be Telling You This by Kate White; Play Like a Man, Win Like a Woman by Gail Evans; How Remarkable Women Lead by Joanna Barsh; I’d Rather Be in Charge by Charlotte Beers.
Learn More About Lean In
print

The Power of Habit
Charles Duhigg

The Life-Changing Magic of Tidying Up
Marie Kondo

Not That Kind of Girl
Lena Dunham

The Road to Character
David Brooks

Is Everyone Hanging Out Without Me? (And Other Concerns)
Mindy Kaling
Back to Top