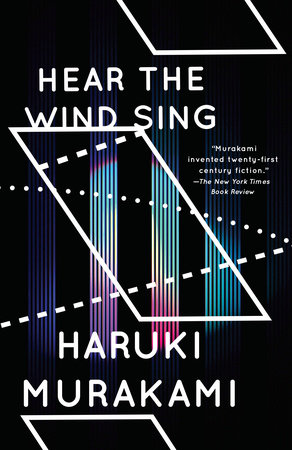 The questions, discussion topics, and reading list that follow are intended to enhance your reading group’s discussion of Wind/Pinball, the first two novels—newly translated and widely available in English for the first time—from internationally celebrated writer Haruki Murakami.

Originally written in 1978 and 1979, Wind/Pinball gives readers a peek into the mind of a young Murakami. These two novels—slim in size but far-reaching in impact—were the works that announced him as a literary star in the making.

Hear the Wing Sing and Pinball, 1973 are coming-of-age novels (of a sort) that explore the actions of a young, unnamed narrator and his friend, the Rat. Rendered in exquisitely bare prose, with moments of surrealism existing alongside intimate snapshots of life’s mundanities, the novels examine youth, obsession, loneliness, and malaise in a manner that is uniquely Murakami in execution. Featuring a new introduction from the author, these novels will delight fans as they trace the development of Murakami’s signature style from its beginnings into his later works.

1. Discuss the introduction in relation to the content of both novels. Consider this statement, found on page xv: “It is the inherent right of all writers to experiment with the possibilities of language in every way they can imagine.” What stylistic risks were present in these novels?

2. On page xvii, Murakami describes Hear the Wind Sing and Pinball, 1973 as his “kitchen-table novels.” What information did you find most surprising or revelatory about Murakami’s beginnings as a writer?

3. Hear the Wind Sing opens with thoughts about the writing process and its relation to general satisfaction with life. Why do you think the protagonist evokes fictitious Derek Hartfield’s experiences? How does Hartfield’s status as a “fighter…a man who used words as weapons” echo throughout the novel?

4. How would you characterize the Rat? How does his personality shift or change between the two novels? What does the Rat value most in life?

5. Discuss the relationship between the protagonist and the Rat. What common traits do they share? How do they complement each other?

6. Few characters in Wind/Pinball are acknowledged by their given names, and are instead referred to by general identifiers: “the girl,” “the twins,” “the Rat.” Why do you think Murakami made this stylistic decision? What effect does it have on the reader? What does this choice assert about identity?

7. In Hear the Wind Sing, the protagonist comments that the Rat “out-and-out despised” the rich (page 9), despite being born into a wealthy family. What role do class and status play in these novels? How does Rat actively fight his upbringing and social class?

8. Both Hear the Wind Sing and Pinball, 1973 feature moments of extreme malaise from its protagonists. How do the narrator and the Rat abate their sadness? What comforts—if only temporary solutions—do they afford themselves in their despair?

9. Discuss the protagonist’s childhood and adolescence as presented in Hear the Wind Sing. What clues are you given about his personality via descriptions of his upbringing? How does his doctor’s dictum, “Civilization is communication,” echo throughout both novels?

10. J the bartender maintains a significant presence in Wind/Pinball. What is his role in the novels? How does he act as a soundboard for both the protagonist and the Rat?

11. On page 25, the protagonist comments that “for the life of me I couldn’t remember what it was like to meet a girl under normal circumstances.” Examine his relationship with women as discussed in these novels. How do his early experiences with women affect his outlook on life?

12. The section “On the Birth of Pinball” discusses the innovation and creation of the pinball machine. Why do you think the protagonist is invested in pinball as both a practice and an invention?

13. On pages 124–7, the protagonist discusses his career as a translator. How does he react to his financial success? What—if anything—does he values about his career?

14. Discuss the role of the twins in Pinball, 1973. What do we learn about them over the course of the novel?

15. Analyze the journey that the protagonist takes in Pinball, 1973 wherein the protagonist seeks out the elusive pinball machine from J’s bar. Discuss the scene in which he is brought to the warehouse. What significance does the machine hold in his life?

16. Murakami seamlessly blends moments of surrealism among scenes of day-to-day trivialities. What moments bent reality for you during your reading experience? How did you interpret them?

17. There is striking visual imagery in both Hear the Wind Sing and Pinball, 1973. What scenes resonated most with you?

18. What other works by Murakami have you read? Did you find these novels to fit in his oeuvre? Can you trace any commonalities between these works and others?

Haruki Murakami was born in Kyoto in 1949 and now lives near Tokyo. His work has been translated into more than fifty languages, and the most recent of his many international honors is the Jerusalem Prize, whose previous recipients include J. M. Coetzee, Milan Kundera, and V. S. Naipaul.
Learn More About Wind/Pinball
print

The Incendiaries
Back to Top