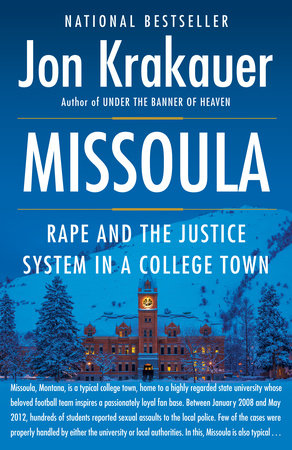 Reports of sexual assaults on college campuses are capturing the headlines. The questions, topics for discussion, and suggestions for further reading that follow are designed to enhance your group’s discussion of Missoula, Jon Krakauer’s hard-hitting investigation into a spate of rapes at the University of Montana that sheds disturbing light on a crisis that extends far beyond the Missoula campus.

According to studies, one in five women will be sexually assaulted during their college years, many by someone they know [The Washington Post, December 17, 2014]. And this startling statistic tells only part of the story: Many women fail to report the crime and only a fraction of rape allegations are prosecuted. Jon Krakauer goes behind the headlines to tell the stories of several victims at the University of Montana. Drawing on first-person interviews with victims, university disciplinary proceedings, police reports, court transcripts, and other oral and written sources, he explores why sexual assaults are so common, the reactions of both victims and their alleged rapists, and how these incidents are handled—and mishandled—by the academic community and the criminal justice system. His conclusions demand a new approach to dealing with sexual violence in our society and the way we treat both victims and perpetrators.

Missoula, Montana, is a typical college town, home to a highly regarded state university whose beloved football team inspires a passionately loyal fan base. Between January 2008 and May 2012, hundreds of students reported sexual assaults to the local police. Few of the cases were properly handled by either the university or local authorities. In this, Missoula is also typical.

In these pages, acclaimed journalist Jon Krakauer investigates a spate of campus rapes that occurred in Missoula over a four-year period. Taking the town as a case study for a crime that is sadly prevalent throughout the nation, Krakauer documents the experiences of five victims: their fear and self-doubt in the aftermath; the skepticism directed at them by police, prosecutors, and the public; their bravery in pushing forward and what it cost them. These stories cut through abstract ideological debate about acquaintance rape to demonstrate that it does not happen because women are sending mixed signals or seeking attention. They are victims of a terrible crime, deserving of fairness from our justice system. Rigorously researched, rendered in incisive prose, Missoula stands as an essential call to action.

1. What insights does Missoula offer into campus culture that can lead to or enable acquaintance rape? Do the attitudes and atmosphere at the University of Montana resemble schools with which you are familiar? Is this culture unique to campus life or does it reflect American culture more generally?

2. For many students (and their parents), college campuses promise a sense of security—a feeling that people watch out for one another. In what ways is this assumption belied by the situations discussed in Missoula? Consider both the circumstances of the sexual assaults and the reactions of other students who learned about the allegations.

3. The descriptions of the assaults feature graphic, harrowing details. Is this essential to our understanding of the victims’ experiences?

4. Almost all the cases Krakauer discusses involve drinking. Does this color your notions of responsibility and blame? Does it influence your feelings about the victims? The perpetrators?

5. “Not unlike many other rape victims, [Keely] Williams reacted by wondering if she was somehow to blame” (p. 23). What does this imply about our understanding of rape? How does it relate to Allison Huguet’s reluctance to ruin her attacker’s life (p. 28), Kelsey Belnap’s to “get anyone in trouble” (p. 42), and Cecilia Washburn’s own testimony at trial (p. 273–74)?

6. Allison Huguet’s mother “reminded Donaldson that he had betrayed [Allison’s] trust” (p. 26). Does the personal betrayal inherent in acquaintance rape make it more traumatic than a rape committed by a stranger?

7. One of the most unsettling aspects of the book is Krakauer’s exploration of how student athletes at the University of Montana are insulated from repercussions when they commit crimes. Do you think that a willingness to excuse the bad behavior of athletes is widespread?  In general, are young men still allowed greater latitude than young women in issues of sexual activity?

8. “Most women are all too familiar with men . . . whose sense of prerogative renders them deaf when women say, ‘No thanks,’ ‘Not interested,’ or even ‘Fuck off, creep’” (p. 104). What does the portrait of serial rapists (pp. 132–137) convey about how a “sense of prerogative” can escalate into continued offenses? Do you agree with David Lisak that “predators like Frank get away with it over and over . . . because most of us are in denial” (p. 135)?

9. Kraukauer recounts the emotional difficulties the women he interviewed faced in the aftermath of their assaults (pp. 68, 173, 186–87) and cites several experts on post-traumatic symptoms that emerge both immediately after an incident and in the months and perhaps years to come (pp. 69, 106, 155).  How are victims affected by the legal outcomes of their cases—that is, whether their attackers are brought to justice? Are the constitutional rights guaranteed to the accused unfair to victims of crime (p. 247)?

10. What do the meetings the Huguets have with prosecutors Shaun Donovan (pp. 178–185) and Suzy Boylan (p. 188–89) demonstrate about the difficulties of pursuing rape cases, even when the accused has confessed? What legal obligations do prosecutors have to victims?

11. Krakauer writes, “Seemingly by design, the American legal system encourages defense counsel to be as mendacious as possible” (p. 266). Do the defense attorneys in the Johnson trial go beyond their professional responsibility to create doubts about Cecilia Washburn and present a sympathetic portrait of Johnson? Do the proceedings reveal a fundamental flaw in the adversarial nature of our justice system?

12. Krakauer casts a harsh light on Kirsten Pabst, who as Missoula County prosecutor often refused to file charges in rape cases and later left her position to join Jordan Johnson’s defense team (pp. 97–98, 107, 259). Does her behavior—and her manner at the Jordan trial (pp. 282–288)—strike you as unethical, or can her choices be justified? What motives—both professional and personal—might explain her actions?

13. Throughout the book, people—including the police, defense attorneys, prosecutors, and friends of the victim and the accused—offer reasons why a woman might lie about being raped (pp. 23, 45, 60, 66,105, 116).  What beliefs about girls and women in today’s society underlie these theories?

14. Why are allegations of rape often doubted or dismissed by authorities? Do you think reports of acquaintance rape should be subject to more scrutiny than rape by a stranger?  Discuss how misconceptions about rape (pp. 278–81) affect police investigations, court proceedings, and ultimately a jury’s decision (p. 334).

15. Is the fear of false rape accusations valid? What are the short- and long-term consequences of the publicity surrounding the cases at Duke University, Polytechnic High School (pp.119–20), and the notorious article in Rolling Stone about the alleged gang rape at the University of Virginia?

16. Should schools play a disciplinary role in sexual assaults that occur on campus? Based on the cases Kraukauer recounts, what can school administrators accomplish that the police and court system cannot? How well do the protocols at the University of Montana and other universities (p. 198) balance the need to avoid punishing the innocent and protect the college community from harm? Do schools have an ethical obligation to inform local authorities about a campus sexual assault?

17. After the U.S. Department of Justice released a damning report on the Missoula County Attorney’s office, an agreement was reached to change the way rapes were investigated (pp. 357–59). Is the intervention of the federal government necessary to institute reforms in local judicial systems?

18. What are the strengths and weaknesses of Krakauer’s case-study approach to campus rape—his focus on a single city? How do the specifics of Missoula help us begin to deal with a national crisis?

19. Krakauer also chose to report from the perspective of the victims (p. xiv). Does this influence your reaction to the book? What, if any, information or points of view would you have liked to have learned more about?

20. What effect might the experiences recounted in Missoula have on a woman who is wondering whether to report a rape?

Jon Krakauer is the author of Eiger Dreams, Into the Wild, Into Thin Air, Under the Banner of Heaven, Where Men Win Glory, and Three Cups of Deceit. He is also the editor of the Modern Library Exploration series.

A Rip in Heaven
Jeanine Cummins

The Other Wes Moore
Wes Moore

Thank You for My Service
Nils Parker, Ross Patterson and Mat Best

Shot in the Heart
Mikal Gilmore

The Translator
Daoud Hari
Back to Top