The Tusk That Did the Damage Reader’s Guide 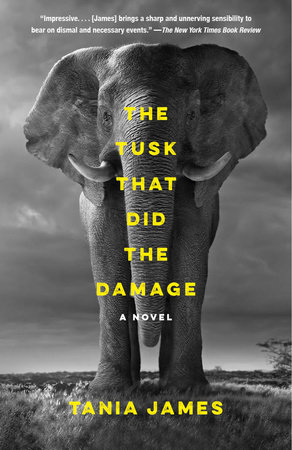 The Tusk That Did the Damage Reader’s Guide

print
The Tusk That Did the Damage Reader’s Guide

The discussion questions and suggested reading that follow are designed to enhance your group’s discussion of The Tusk That Did the Damage, a captivating new novel by Tania James.

The Tusk That Did the Damage is an utterly contemporary story about an ancient and majestic elephant, and his dangerous connection to the land and the people around him. Orphaned by poachers as a calf and sold into a life of labor, Gravedigger has broken free of his chains and is terrorizing the South Indian countryside. Caught up in the violence are the studious younger son of a rice farmer drawn into the sordid world of poaching; and a young American documentary filmmaker engaged in a risky affair with the veterinarian who is her subject. In three intertwined storylines—own of them narrated by the elephant himself—Tania James crafts a heartbreaking tale of the ivory trade, exploring the porous boundary between conservation and corruption. It is a wrenching exploration of love and betrayal, duty and loyalty, and the vexed relationship between man and nature.

2. Consider the various points of view represented in the novel. The voice shifts from first person to third person between chapters, allowing readers to access the innermost thoughts of many different characters. What effect does this have on the reader? Does any one point of view ultimately seem to dominate the story? How might your interpretation of the book have differed if the story had been told in a single voice or from a single perspective?

3. Evaluate the monikers given to characters both in the chapters’ titles and within the story itself—Gravedigger, the Poacher, and so on. Are these monikers and designations always fitting or accurate? In the story, who assigns these names and how are they determined? How might this contribute to a broader dialogue about reputation and identity?

4. Teddy is chided for believing that an elephant waved to him. Do you believe that animals possess attributes that we might typically characterize as “human,” or do you feel that these attributes are mistakenly impressed upon them? How does one’s opinion on this subject contribute to one’s understanding of the relationship between man and animal, or is it irrelevant? How does the use of an elephant as a main character in the novel affect your thoughts on this subject? How do the author’s choices in this area help to shape the trajectory of the novel and influence the way a reader might interpret it?

7. The characters in the novel are faced with complex ethical choices. Does the novel provide us with a clear sense of who is “right” and who is “wrong” in the story—or who is “good” and who is “bad”? What seems to influence the characters’ decision-making process? For example, how does the economic status of each character affect his or her decision making? Do you agree with the decisions made by Ravi and Emma at the end of the book? By Jayan and Manu?

8. Evaluate the treatment of memory in the novel. Whose memories are we privy to as readers? Old Man says that the elephant’s memory is a gift, but Mani-Mathai disagrees, saying it is actually a terrible gift (119). Does the incredible memory of the elephant ultimately seem to be portrayed as a gift or a curse in James’s book? How does memory seem to affect the human characters in the novel?

9. Do any of the characters experience regret or feelings of guilt as a result of their actions? Why or why not? Do the characters learn from their mistakes or repeat them? What might this indicate about human nature?

10. The characters in the story reveal various prejudices. What types of prejudices are evident in the book? What role do superstition, religious beliefs, and tradition each play in determining one’s convictions and prejudices? What might—or does—allow the characters to overcome these prejudices?

11. Many of the characters lie to or betray one another. Why do they do this? Do these betrayals and lies serve some greater purpose or are they simply mistakes motivated by self-interest?

12. Loss is a constant in the novel. Discuss the various examples of loss featured in the book. How do the characters react to loss? What overall message do you think the book offers on the subjects of grieving, coping, and loss?

13. Through the exchanges of the many characters, storytelling itself becomes a subject of the novel. Who in the novel would you consider a storyteller? What are some of the legends, myths, and folktales presented in the book? Do these stories contain any truth? Why do the characters share stories with one another?

15. At one point Emma claims that she is trying to be objective in her work, while Teddy seems determined to create a film that will mirror his point of view. In your opinion, which is more vital to art: impartiality and neutrality or a strong point of view? Explain.

16. Consider the various ways in which elephants are depicted in the story—as fearful creature, as monsters, and as gods. Who provides these characterizations and what influences the way they think about the animal? Does any one characterization of the animal seem to overtake the others? Would you say that James ultimately presents a sympathetic rendering of the elephant, a condemning one, or a neutral one? How do her choices in characterizing the elephant ultimately contribute to your conclusions about their treatment and the choices of the human characters in the book?

17. While he is being filmed, Ravi says that “fear and worship are two sides of one coin” (171). What does he mean by this? Do you believe that he is correct?

18. Some political issues related to environmentalism are addressed within the story with characters falling on different sides of the issues. Does the book ultimately seem to offer a clear message about conservation or progress? Why are the villagers upset with the Forest Department? Do you believe that they have a right to be or are they simply resistant to progress or angry that they are not profiting, as Madame Samina suggests?

20. Compare The Tusk That Did the Damage to other stories that include examples of anthropomorphism. Among the works you have considered, do the authors seem to use this device for a similar purpose? Do you think that each of the authors believes that the animals they write about truly possess the “human” characteristics attributed to them? How does James’s anthropomorphism compare to or differ from the other examples? Why do you think this is so?

TANIA JAMES is the author of the novel Atlas of Unknowns and the short-story collection Aerogrammes. Her fiction has appeared in Boston Review, Granta, Guernica, One Story, A Public Space, and The Kenyon Review. She lives in Washington, DC.
Learn More About The Tusk That Did the Damage
print
Back to Top