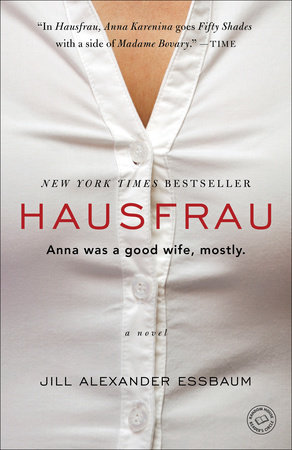 1. That Anna. So—-really—-what’s her deal? Her thoughts loop on a script of immutable passivity, but is that her whole story? From the onset we know she is a flawed protagonist, a damaged character, a woman who is “nothing but a series of poor choices executed poorly.” Taking into account Anna’s personal history, her psychic and spiritual makeup, and those aforementioned poor choices, is there any part of this tragedy that somehow isn’t her fault? What should she be held accountable for? Of what, if anything, are you willing to absolve her?

2. Bruno proposes to Anna with the words “I think you would make a good wife for me.” What, in your opinion, would make him think that? They’ve been together for over a decade. By book’s end it’s clear that Bruno has either known about or suspected Anna’s infidelities the entire time. Why would he tolerate them? Why would he tolerate her? Is this a sign of his weakness or his strength? What does he “get” out of this marriage?

3. Mary, in her decency, stands in direct opposition to the self–centered narcissism of the majority of Anna’s actions. Simply put, Mary seems to be everything that Anna should be but isn’t. But the book suggests that Mary’s two–shoes aren’t altogether goody, so to speak. In three separate instances, she “spills” herself in front of Anna: when she drops her purse and blurts out a more–Anna–than–Mary expletive, when she drops her purse and the erotic novel (and the wistful truth that she regrets not exploring her sexuality) tumbles out, and, finally, when she admits to the bullying and setting the fire. In these ways, Mary has more in common with Anna than Anna is open to recognizing. Do you think Mary can see past Anna’s façade? Do you think she understands Anna on a fundamental level? If not, then do you think she would ever be able to? What do you think will happen to Mary after the book ends?

4. Anna’s lack of morality is almost shocking. What do you think is her gravest mistake? Is there any point during the course of the narrative where she could have stopped the progression of events?

5. Anna rarely tells Doktor Messerli the whole truth. Why, then, do you think she continues the analysis?

6. Anna has never learned to speak German, and yet she exhibits an unmistakable talent for language: she plays with words, turns puns, thinks in entendre—-though rarely does she speak these things aloud. Is it shyness that prevents her from showing this side of herself? Fear? What would it look like if Anna could tap into her “voice”? What would it change?

7. Of all the children, Charles is the most dear to Anna. Victor is too much like Bruno for Anna to fully trust. But as the sole memento of the relationship with Stephen, one might assume that Polly Jean would hold the spot closest to Anna’s heart. Discuss Anna’s relationship with her children. She won’t win mother of the year in anyone’s contest—-but is there any way in which she can be commended? Is there anything she does as a mother that is correct? Good? Nurturing?

8. Anna confesses she majored in home economics in college. Couple this with the perfect memory of sewing with her mother, and the seed of Anna’s present psychology begins to form. As her station as a wife and a mother starts to fail her (or rather, she, them), we are able to understand that somewhere in Anna’s fundamental self she was raised to be these things. Why does she cling to this fantasy if it doesn’t seem to suit her?

9. At the end of chapter 6, Anna thinks, “I wish I’d never met the man.” Which man do you suppose she means?

10. Doktor Messerli warns Anna that “consciousness doesn’t come with an automatic ethic,” and Anna’s choices seem to bear this out. Taking into consideration Doktor Messerli’s explanation of the Shadow, her story of the Teufelsbrücke, and the final events of the book, is it possible to argue that, ethics aside, Anna has come into complete consciousness?

11. Archie says to Anna that a man can smell a woman’s sadness. In the same vein, Anna talks herself through the morning after the physical confrontation with Bruno with a “You had this coming” speech to herself (“I provoked this. . . . I brought this to myself. . . .”). By this reasoning, Anna is an active participant in her own downfall. But Anna claims to be almost entirely passive. Do you consider Anna to be more passive or more active? How does this complicate your understanding of Anna’s psychology?

12. In terms of the structure of the novel, the analytic sessions with Doktor Messerli serve to explicate, illuminate, underscore, and complicate the plot of the book and any conclusion that Anna believes she’s arrived at. Are there any places in the book where this is particularly meaningful to you?

13. There’s an intriguing symmetry to the way that the grammar of the German language—-the tenses, moods, conjugations, false cognates, infinitives, et cetera—-lays itself out in a pattern that easily overlays the poignant heartbreak of the novel. And yet, one of the themes of Hausfrau is language’s ultimate inadequacy. Is that tension resolvable? If so, how? Is this something you have encountered in your own life?

14. The book depends upon the coolness of the Swiss, the impenetrable nature of the landscape, and the solitude of nighttime in order to fully call forth Anna’s deep despair and alienation. Could this book take place in another setting? Anna’s everyday environs—-the hill, the bench, the trains, the Coop—-become characters in their own right. Are there other functions the novel’s setting serves?

16. An entirely speculative question: What do you think will happen to Bruno and Victor and Polly Jean? Can you imagine their lives post–Anna?

Instructions for a Heatwave

Perfect
Back to Top