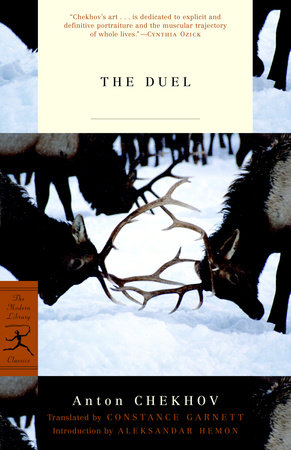 1. Like much of Russian literature from the nineteenth century, The Duel deals explicitly with ideas and ideologies and how they function in the “real world” depicted in the novel. Chekhov’s story plots the conflict between two protagonists who espouse antithetical worldviews: Von Koren and his Social Darwinism, in which only the fittest should survive, and Laevsky and his “Hamletism” (“My indecision reminds of Hamlet”), that is, his tendency to blame his own hypocrisy and moral turpitude on the corrupting influences of his time and civilization. Identify and discuss some of the passages in which the two characters discuss their own and, more important, each other’s worldviews. In what ways do these two protagonists embody their self-professed beliefs?

2. What makes The Duel interesting is that neither of the two main characters prevails: Laevsky proves himself wrong, discovering that he is actually capable of modest and useful work, and is reconciled to Nadezhda Fyodorovna. Von Koren’s belief in the irredeemableness of “socially inferior” personalities is disproved, and the scientist willingly apologizes to his former enemy, admitting that he had wrongly judged him. If the worldviews of the two main characters fail, who, then, is right in the story? Whose views prevail? What is the moral of this explicitly moral, fable-like story?

3. Chekhov was notoriously self-effacing. At least on an initial reading his stories can seem, as the critic Ernest J. Simmons put it, “gentle, penetrating, unifying and poetic,” which is an indirect and perhaps over-nice way of saying that there is little of the gutsy philosophizing for which Russian literature is justly famous. Furthering the impression of his indifference, Chekhov said relatively little about his own views in his letters or diary. Probably his most famous pronouncement on the public’s perception of him as a thinker was penned in 1889, about a year before he began working on The Duel:

I should like to be a free artist and nothing more, and I regret that God has not given me the power to be one. I hate lying and violence in all their forms. . . . Pharisaism, stupidity and despotism reign not in merchants’ houses and prisons alone. I see them in science, in literature, in the younger generation. . . . That is why I have no preference either for gendarmes, or for butchers, or for scientists, or for writers, or for the younger generation. I regard trade-marks and labels as a superstition. My holy of holies is the human body, health, intelligence, talent, inspiration, love, and the most absolute freedom–freedom from violence and lying, whatever forms they may take. This is the programme I would follow if I were a great artist.*

How does Chekhov’s artistic “programme” comment on the message of The Duel, and vice versa?

4. When The Duel begins, Laevsky is complaining to Somoylenko that he has fallen out of love with his mistress, Nadezhda Fyodorovna. Chekhov paints a penetrating portrait of seemingly irreconcilable mutual isolation between the two, and as the story progresses, and Laevsky discovers Nadezhda Fyodorovna’s unfaithfulness, the grounds for their isolation seem to grow. Yet, by the end of the novel the two have reconciled. What exactly causes Laevsky’s change of heart? How convincing is the reconciliation?

5. The deacon–despite his frivolousness–plays a pivotal and serious role in The Duel, namely, preventing Von Koren from killing Laevsky. While sitting in the bushes and watching the unfolding duel, the deacon mutters “Moles,” a reference to an earlier conversation he had had with Von Koren. Reread the conversation (in chapter XVI) between the two, and discuss why the deacon recalls it while watching the duelists. What sort of person is the deacon? In what ways does he differ from Von Koren and Laevsky? Why is he always giggling?


*The letter is to A. N. Pleshcheyev, dated October 1889. Letters of Anton Chekhov to His Family and Friends, trans. Constance Garnett. New York: The Macmillan Company, 1920.

Learn More About The Duel
print

The Gentleman from San Francisco and Other Stories
Ivan Bunin

A School for Fools
Sasha Sokolov

The Last and the First
Nina Berberova

Inside the Head of Bruno Schulz
Maxim Biller

The Discovery of Heaven
Harry Mulisch

The House of the Dead
Fyodor Dostoyevsky

Of Sunshine and Bedbugs
Isaac Babel

Look at the Harlequins!
Vladimir Nabokov
Back to Top