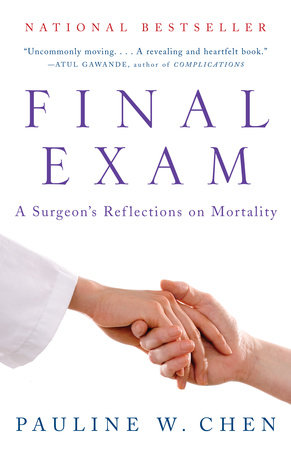 “Uncommonly moving. . . . Revealing and heartfelt. . . . Pauline Chen takes us where
few do—inside the feeling of practicing surgery, with its doubts, failures, and triumphs.”
—Atul Gawande, author of Complications: A Surgeon’s Notes on an Imperfect Science

The introduction, discussion questions, and suggestions for further reading that follow are designed to stimulate your group’s discussion of Final Exam, Pauline Chen’s searing memoir about her medical education and its failure to prepare doctors to deal with one of their most disturbing—and frequent—experiences: the death of a patient.

In Final Exam, Pauline Chen tells the story of her own medical education and the many crucial experiences with patients that led her to become a more empathic, more compassionate, and more patient-oriented doctor.

“I never intended,” Chen writes, “to make my living among the dying.” She began her medical career with dreams of saving lives but found very quickly that death would be a constant, though largely unacknowledged, companion. Chen reveals the many ways doctors are taught to distance themselves from their emotions. Dissecting a cadaver to learn human anatomy is the first experience designed to help doctors feel that the “dead human body [is not] ‘one of us’ but ‘one of them,’ a medical case to be understood but not embraced” [p. 8]. This demand to understand but not embrace, Chen finds, runs throughout the medical profession and is reinforced again and again. Why? Because doctors, even more than most of us, fear death and feel they must prevent, control, deny, and emerge victorious over it in every circumstance, no matter how dire. The body has become, for them, a “potentially reparable biological machine.” Chen shows that doctors are given little or no training in how to deal with death, how to talk to terminally ill patients and their families, or how to offer comfort when all the technologies and surgical procedures fail.

But Chen’s narrative is as much about her own journey to a more humane and compassionate approach to terminal illness as it is about a dysfunctional educational system. She writes with arresting immediacy of desperate attempts to keep patients alive, of the tortured death of an infant after many futile surgeries, of a dying friend she could not call, of an organ-donor corpse whose body bore an unnerving resemblance to her own. Chen brings a remarkable degree of self-awareness and sensitivity to these experiences, and by examining them so closely, she begins to see what she lacks as a doctor and what she must do to become someone who can comfort as well as heal.

As gripping as the best fiction, Final Exam offers deeply important insights not only into our medical system but into the human condition itself.

1. What ideals and expectations does Pauline Chen begin her medical career with? How does the reality of life as a doctor challenge these ideals?

3. In what ways does Chen change during the time period covered in Final Exam? How is she different by the end of the book? What experiences have been most crucial bringing about these changes?

4. What are the major problems with the medical establishment as revealed by Final Exam?

5. Chen writes that doctors “learn not only to avoid but also to define death as the result of errors, imperfect technique, and poor judgment. Death is no longer a natural event but a ritual gone awry” [p. 95]. What are the consequences, for patients and for doctors, of this way of defining death? What would be a more realistic and helpful definition?

6. Chen writes of dissecting a cadaver as a kind of initiation and says that “to complete the initiation rite successfully . . . we need to learn to separate our emotional self from our scientific self; we must view this dead human body not as ‘one of us’ but as ‘one of them,’ a medical case to be understood but not embraced” [p. 8]. Why is traditional medical training so concerned with repressing, ignoring, or denying such natural human emotions as empathy, compassion, fear, and love? What supposed advantages is this suppression of emotion thought to confer upon the doctor? What is inherently problematic with such a view?

7. Why do doctors, in Chen’s view, feel the “need to be infallible in a highly variable world” [p. 119]? What are the consequences of such a need?

8. Chen draws upon her experiences with real patients. What do these people add to the story she tells in Final Exam? Which of these cases is the most moving? How do the patients Chen writes about change her?

9. Chen writes that doctors grow to feel immortal because they survive while so many patients do not. By the time Chen has operated on more than sixty organ donors, she feels her own immortality “was beyond question” [p. 197]. Then she must operate on a woman whose body bears an uncanny resemblance to her own. How does this affect her?

11. What makes Chen’s writing so compelling? In what ways does Final Exam read more like a novel than a book of nonfiction?

12. What promising signs does Chen see in the ways doctors are learning to treat the terminally ill? What remains to be done?

13. Which doctors in Final Exam does Chen most admire? How do their words and deeds affect her?

14. At the very end of Final Exam, Chen writes, “I had comforted my patient and his family. I had eased their suffering. I had been present for them during life and despite death. I had caught a glimpse of the doctor I could become” [p. 211]. What essential truth does Chen embrace here? What kind of doctor is she likely to become?

Pauline W. Chen attended Harvard University and the Feinberg School of Medicine at Northwestern University and completed her surgical training at Yale University, the National Cancer Institute (National Institutes of Health), and UCLA, where she was most recently a member of the faculty. In 1999, she was named the UCLA Outstanding Physician of the Year. Dr. Chen’s first nationally published piece, “Dead Enough? The Paradox of Brain Death,” appeared in the fall 2005 issue of The Virginia Quarterly Review and was a finalist for a 2006 National Magazine Award. She is also the 2005 cowinner of the Staige D. Blackford Prize for Nonfiction and was a finalist for the 2002 James Kirkwood Prize in Creative Writing. She lives near Boston with her husband and children.

Ask Me Why I Hurt
Randy Christensen, M.D.

Falling Into the Fire
Christine Montross

In the Neighborhood
Peter Lovenheim

The Price of Silence
Liza Long

Another Day in the Frontal Lobe
Katrina Firlik

Is There No Place on Earth for Me?
Susan Sheehan

On the Move
Oliver Sacks

You Don’t Look Like Anyone I Know
Heather Sellers

Last Night in the OR
Bud Shaw

The Heart of Caring
Mark Vonnegut

An Anatomy of Addiction
Howard Markel

What Patients Taught Me
Audrey Young