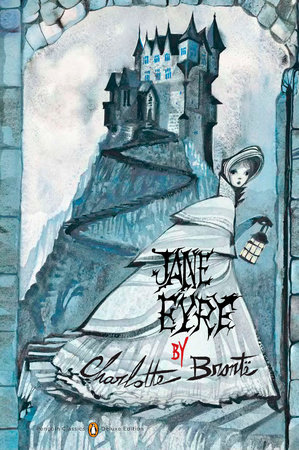 Like Frankenstein and Dracula, Jane Eyre is a Victorian novel that has passed into common consciousness and proved remarkably adaptable, generating several film and stage versions. That Jane Eyre shares this fate with the two greatest horror novels of the nineteenth century is instructive. Like them, it speaks to deep, timeless human urges and fears, using the conventions of Gothic literature to chart the mind’s recesses.

The detailed exploration of a strong female character’s consciousness has made readers in recent decades consider Jane Eyre as an influential feminist text. The novel works both as the absorbing story of an individual woman’s quest and as a narrative of the dilemmas that confront so many women. Its mythic quality is enhanced by the fact that at the time of its writing its author was, like her heroine, unmarried and unremarked, and considered unattractive. In Jane Eyre, Charlotte Brontë created a fully imagined character defined by her strength of will. Though Jane is nothing more than an impoverished governess, she can retort to her haughty employer Rochester: “Do you think, because I am poor, obscure, plain, and little, I am soulless and heartless?—You think wrong!” (p. 284). Jane’s willfulness scandalized many contemporary critics, who called her (and the novel) “coarse” and “unfeminine.” Such criticisms were powerless against the novel’s popularity, and Jane’s indomitable voice continues to enthrall readers more than 150 years after the novel’s original publication.

In its first-person narration and autobiographical structure, which follows the title character from childhood to adulthood, Jane Eyre has much in common with another durable Victorian novel, David Copperfield. As with Dickens’ novel, some of the scenes readers are most likely to remember are those in which the child narrator is nearly overwhelmed by cruelty. Jane Eyre opens with orphaned, ten-year-old Jane’s forcible eviction from her window-seat refuge by her vicious and pampered cousin, John Reed. When Mrs. Reed takes John’s side and locks Jane in the red-room, the pattern of Jane’s oppression by authority figures is set. At Lowood School Jane is singled out for abuse by the tyrannical and self-righteous headmaster, Mr. Brocklehurst. Though apparently powerless—being young, female, poor, and virtually without family—she defies the humiliations Brocklehurst imposes on her. Brontë presents the soft-spoken, forgiving Helen Burns as an example of moral perfection, but it is the outraged and rebellious Jane who is more appealing.

As an adult, Jane faces the romantic prospects of a young woman lacking the social advantages of family, money, and beauty, and therefore especially vulnerable to the allure of admiration and security. By creating two suitors who exemplify opposing threats to Jane’s selfhood, Brontë dramatizes Jane’s internal struggles against competing temptations, and Jane’s efforts to resist both the ascetic St. John Rivers and the sybaritic Rochester provide the most powerful drama in the book. In Jane, Brontë gives us a character able to withstand St. John’s missionary call to self-immolation in a marriage to serve humanity and Rochester’s attempts to persuade her to indulge her sexual and romantic desires at the expense of her own moral code.

As central to the novel as Jane’s conflicted relationship with Rochester is, her connection with his mad, despised first wife, Bertha Mason Rochester, is at least as intriguing, though the two women hardly meet and never converse. The revelation of Bertha’s existence, which Rochester has concealed from Jane, saves her from the bigamous marriage that Rochester had planned. Though Brontë’s characterization of Bertha, locked away on a top floor, plays into many nineteenth-century stereotypes of the “native” or “primitive” woman, it also suggests a close kinship between Bertha and Jane. Both women are attracted to Rochester; both live in his house; and both are mistreated by him. Critics and readers alike have puzzled over how to understand this connection. To what extent is Bertha a double for Jane, acting on her behalf? To what extent is she a figure for the fate—inarticulate, imprisoned, hopeless—that awaits Jane if she surrenders to the corrupt Rochester?

A similar ambiguity pervades the novel’s ending. While Jane’s “Reader, I married him” (p. 498) carries a note of relief and triumph, the path to this ending is so convoluted and disturbing as to raise questions about how we are to understand it. If Jane and Rochester’s marriage as equals requires not only Rochester’s moral regeneration, blinding, and partial crippling, but also Jane’s inheriting a small fortune, what is the novel saying about the real-life prospects of a woman like Jane enjoying such a union? Throughout the novel, Brontë asks how a woman in her society can have passion and integrity, love and independence. Jane Eyre does not so much suggest definitive answers as pose the questions with an urgency and a depth of imagination that challenge readers.

Marked by grief, obscurity, and determination, Charlotte Brontë’s life closely resembles that of her most famous heroine. Left motherless at an early age, Charlotte, her brother, and her four sisters were raised in the Yorkshire village of Haworth, where their father was curate. Charlotte’s two older sisters died of illnesses contracted at the Cowan Bridge boarding school, which Charlotte also attended and which she used as the basis for Lowood in Jane Eyre. At nine, she became the eldest of the four surviving siblings. Charlotte, Emily, and Anne, along with their brother, Branwell, read voraciously and created an elaborate fantasy world. The four wrote prolifically, in preparation for the later literary efforts of the three sisters. Charlotte attended school, worked for a time as a teacher, and had a brief career as a governess. In 1842, she and Emily went to Brussels to study languages. Charlotte’s teacher there was the charismatic M. Heger, a married man with whom she fell in love. Her emotionally fraught, though celibate, relationship with him served as the basis for her first novel, The Professor. Written in 1846, it was not published until after her death.

In 1845, Charlotte, Emily, and Anne published Poems by Currer, Ellis, and Acton Bell. Though it sold virtually no copies, the sisters continued to write under these male pseudonyms, and, in 1847, Charlotte published Jane Eyre, which was a resounding popular success. Both Branwell and Emily died in 1848, with Anne following the next year. Charlotte went on to publish Shirley (1849) and Villette (1853). In 1854, she married Arthur Bell Nicholls, her father’s curate, but soon died during pregnancy.

Emily Brontë, Wuthering Heights (1847)
Through the passionate and ultimately self-destructive love of Catherine and Heathcliff, this novel explores questions of identity and the individual’s relationship with society.

Wilkie Collins, The Woman in White (1860)
This prime exemplar of the “sensation novel” uses mistaken identity, wrongful imprisonment in an insane asylum, and other Gothic conventions in a plot that also addresses the theme of women’s place in society.

Henry James, The Portrait of a Lady (1881)
Isabel Archer, the intelligent and independent heroine of James’s novel, suffers a fate that contrasts sharply with Jane’s when she succumbs to a stifling marriage.

The Children’s Book
A. S. Byatt

A Month in the Country
J.L. Carr
Back to Top